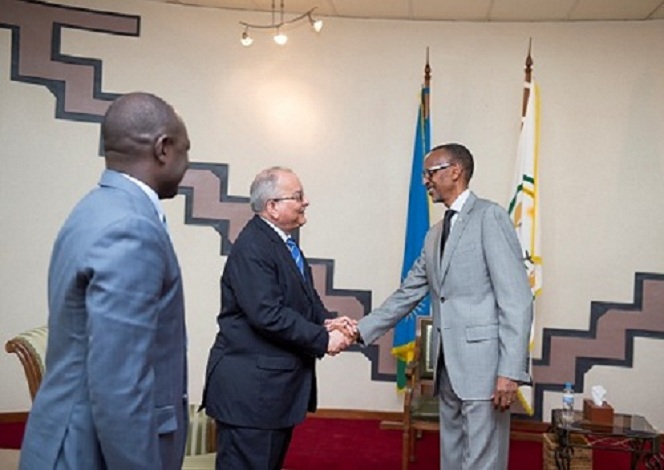 With its success in restoring peace in Central Africa Republic, Mali S. Sudan, and other conflict regions, ECCAS has officially requested Rwanda to be a  member of the block, after the country  withdrew its membership to focus on contribution to the growth of the East African Community.

Ahmad Allam-Mi, the Secretary-General of t ECCAS met with Rwanda’s President Paul Kagame in Kigali today and delivered the request.

Ahmad Allam-Misaid that ECCAS is looking for Rwanda’s unique leadership especially in good governance, conflict resolution and integration. “You [Rwanda] are a model in Africa,” has said shortly after meeting Kagame.

Allam-Mi told President Kagame that the central African States are encountering difficulties to solve conflicts that are prevailing between them, especially in Central Africa Republic where hundreds have been killed in a civil war that started in 2012.

An extraordinary security summit for Central African Republic (CAR) by ECCAS Head of States is scheduled to take place in Chad, the current chair of ECCAS before end of this year.

Ahmad Allam-Misaid, a Chadian national,  requested President Kagame not to miss it.

The block believes Kagame’s presence will be of a vital contribution.

Regardless, Rwanda’s input will be an addition to what the country is doing in the region since the last 10 years in peace building.

Rwanda was the first to send its peacekeepers in Darfour, Sudan when a conflict erupted since 2004, under African Mission in Sudan (Amis) and then United Nations Mission for Sudan (UNAMISS).

Rwanda also intervened in Central Africa Republic since 2012, with several contingents including a special guard for the Head of State.

Other Rwandan troops are serving in Haiti and South Sudan.

Rwanda has deployed 4,650 Peacekeepers in various missions, and is ranked 5th globally.

Recently, President Paul Kagame pledged for more peacekeepers and logistics to the countries in conflicts.

Rwanda had temporarily withdrawn from ECCAS in 2008 to concentrate on East African Community Integration especially on policies and reintegration projects, including single monetary policy, removing non-tariff barriers and execution of the northern corridor projects.

The Ministry of Foreign Affairs had announced Rwanda’s reintegration in ECCAS earlier this month.

Allam-Mi has continuously expressed concern about the insecurity prevailing in the central Africa region. In 2006, he declared that Chad had received over 300,000 refugees from the insecure Darfour in Sudan while 50,000 other people in his own country had been displaced, and hundreds killed.

He called upon UN to send peacekeepers in the region.

The United Nations Security Council agreed to send peacekeepers to Sudan. Meanwhile, before trrops were deployed, Rwanda had already sent 155 peacekeepers in the region under the African Mission in Sudan (Amis).