Alarming cases of malnutrition have forced Rwanda to engage investors and seek solutions to the demise.

By 2014, 48% of Rwandan children below the age of five were still malnourished; a slight reduction of 6% from 54% in 2010, according to the 4th integrated household living conditions survey report released in September 2015.

While launching the report on September 14, President Paul Kagame challenged members of his government to seek immediate ways of combating malnutrition. “It’s a matter of putting things together,” he said.

Subsequently, the government has entered into a deal with Africa Improved Foods Ltd (AIF) which will address malnutrition by manufacturing enhanced nutritional foods for vulnerable groups including the rural poor in Rwanda and the East Africa region.

The Ministry of Agriculture says the country has already invested in fortified food factories to deal with a growing demand on the market.

This is a result of the increasing demand on the Rwandan market. Currently, Rwanda imports most of the products including powdered milk, soya and cereals from Uganda, Kenya and Europe.

With Rwanda entering the new partnership, officials said the joint venture will reach more than one million people annually with effective nutrition interventions by 2017.

A factory will be constructed in the capital Kigali to produce fortified foods, creating 230 direct jobs while offering 9,000 local farmers a stable, sustainable income for a proportion of their harvest.

Agriculture Minister, Geraldine Mukeshimana told KT Press that: “By using locally grown maize and soya beans to produce fortified foods, this partnership is a right step in achieving this goal.”

According to Rwanda Development Board, former US President Bill Clinton, under his ‘Clinton Foundation’, in a joint venture with DSM and ETG, a regional agricultural supplier, has also invested $60 million in construction of fortified food processing factory, with a capacity to over 20,000 tons of raw materials every day.

Currently Sosoma and Minimex are the only local companies producing baby food, but not enough for the demand.

Major initial customers of the joint venture company include the World Food Program; facilitating an efficient response to food emergencies in East Africa, and the Government of Rwanda that is committed to ensuring that the Rwandan population has access to nutritional foods.

Rwanda will distribute the fortified foods across the country.

Ute Schick, CEO of AIF commented that: “We are proud to be supported by a unique coalition of committed partners to produce nutritious foods in Africa.

Our commitment will create jobs and provide income to local farmers.” 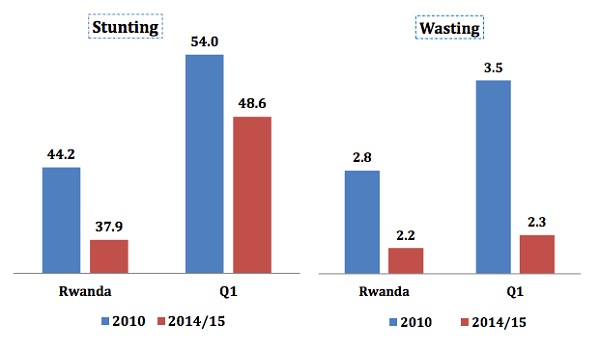