It is July 3, 2015 on a sunny Friday and villagers of Nyanza district are eagerly waiting for First Lady Jeannette Kagame. Women are dressed in colourful traditional outfits (imishanana). Excitement has captured the crowd.

The First Lady finally arrives. Things are happening very fast, and the mood is being felt, but she is exploring the environment carefully as she tours five new built homesteads she helped mobilise funds for.

Not so long enough she succumbs to something she might never forget in her life.

Sitting between elderly women in their sixties and above, mostly genocide widows, the First Lady wraps her arms and leans against one of them as she listens to a warm, but moving conversation.

Vestine Mukamusoni 64, a genocide widow, and one of the beneficiaries of this project, suddenly does something that arrests the First Lady’s emotions.

Mukamusoni, who lost her husband and two children to the genocide and all properties destroyed, is sobbing.

She struggles with holding her tears back as she thanks the First Lady for her generosity.

“This is something I had never dreamt of,” says Mukamusoni who spent years running all over the village seeking shelter in different homes, many a time not welcome.

The homeless and vulnerable Mukamusoni, and nineteen other widows, now have a decent home, thanks to the First Lady’s efforts to mobilise almost Rwf200 million for these houses.

Watching the elderly widows express their moving gratitude to the First Lady was arguable one of the most memorable moments of 2015.

During the 10th  celebration of Imbuto’s Promotion of Girls’ Education on July 5, 2015, in Kigali, Cecile Umurerwa, one of the beneficiaries told the gathering how she had lost hope to get an education, until the opportunity to pursue her studies was made possible by the foundation.

“I never expected to graduate from university and become an engineer today,” she said.

Umurerwa’s colleague, Sybille Ugirase, said that she considers the First Lady her parent. “You made us who we are today.”

Mrs Cherie Blair-wife of former British Prime Minister Tony Blair, who witnessed the historic event, advised the girls that they should seize the opportunity and remember that “all this involves humility, hard work and commitment.”

The foundation continues to provide guidance to the graduates and those still in school, through the creation of networking groups.

To date, 203 girls from across the country have been rewarded with laptops and trained in IT essential skills aimed at equipping the girls with ability to overcome cultural and socio-economic barriers.

“We are convinced that the best way to overcome the obstacles facing girls is to influence the home and school environments,” Mrs Jeannette Kagame told the graduates.

Her philosophy is that,  “A seed well planted, watered, nurtured and given all the necessary support, successfully grows into a healthy plant- one that reaches high and stands tall.”

Notably though, this year, apart from celebrating the 10th anniversary of the Promotion of Girls’ Education (through the Best Performing Girl Campaign), the First Lady’s Foundation, Imbuto, was also involved in numerous activities aimed to empower diverse communities across the country.

Through the 12+ project, funded by the Department for International Development (DfID), and implemented in partnership with Caritas and World Relief, Imbuto Foundation was able to mentor 4,023 young girls between 10 and 12 years old on social, health and economic aspects.

Since 2013, under the Early Childhood Development and Family (ECD&F) services, funded by UNICEF, and implemented in nine centers across the country and through home visits, Imbuto Foundation has been supporting the holistic development of 0-6 year old children through the provision of integrated health, nutrition, early learning and protection services to over 4300 families and 4600 children.

By providing an environment for learning and growth, over the last 16 months, these children under the age of six have been enrolled into classes that help them develop skills in school readiness and learn better hygiene practices.

These centers and home-visits programmes are also used to counsel parents on childcare, health and parental bonding, on a weekly basis.

In addition to the education support given to toddlers, Imbuto Foundation continued to promote the importance of school education for its scholarship recipients outside the classrooms.

Over 700 students attended an annual Holiday Camp, between November 29 and December 2, to interact with inspirational speakers and learn about various important topics such as critical thinking, entrepreneurship, debate skills, sexual reproductive health, among other life skills.

These students came from the Foundation’s Scholarship Project known as ‘Edified Generation’, created in 2003, to financially support bright, but vulnerable students pursue their secondary education.

To date, about 6,471 disadvantaged boys and girls have benefited from an annual US$300 funding, per student, for tuition, uniform, transportation and other school requirements at the secondary school cycle, while aiming to maintain 1,000 students on the scholarship project every year.

Most beneficiaries of the First Lady’s foundation, especially the vulnerable, have become self-confident men and women. Some are engineers, doctors and IT specialists.

This December, Imbuto Foundation also had its biennial event Celebrating Young Rwandan Achievers (CYRWA), which was organized in partnership with the Ministry of Youth and ICT (MYICT), to recognize YouthConnekt Champions, those organisations that steered their activities toward empowering Rwandan youth.

Through this partnership, MYICT and Imbuto Foundation recognized seven individuals and three organisations that made a positive, and lasting, impact in the lives of young people, living in Rwanda.

Meanwhile, apart from participating in a number of international events promoting education, the protection of the rights of women and children, and fighting poverty, to share ideas on what should be done to change the lives of communities across the globe, the First Lady also got involved in new philanthropic activities.

As such, this month of June saw the establishment of New Faces New Voices, a women empowerment initiative patronized in Rwanda by the First Lady, which set a target to raise $20 million to finance projects for women in business.

On October 27, the First Lady delivered keynote remarks at the African Philanthropy Forum in Kigali, a branch of the Global Philanthropy Forum which aims at building a community of African donors and social investors committed to international causes, primarily focusing on the effective and strategic delivery of solutions to the most pressing needs in communities.

The first APF conference took place in Addis Ababa, Ethiopia and this year, Rwanda was selected to host the second conference, because of its impressive records in tackling issues of national priorities. Mrs Jeannette Kagame was invited to speak based on her continuous philanthropic efforts through Imbuto Foundation, and other initiatives as the First Lady.

As the year ends with these remarkable achievements, one can only look to the future, eager to see the role Imbuto Foundation will continue to play in uplifting the lives of the more vulnerable ones, while creating an avenue for people like Umurerwa, to reach their full potential and empower others to excel in their field of choice.

List of international events attended by Mrs Jeannette Kagame in 2015 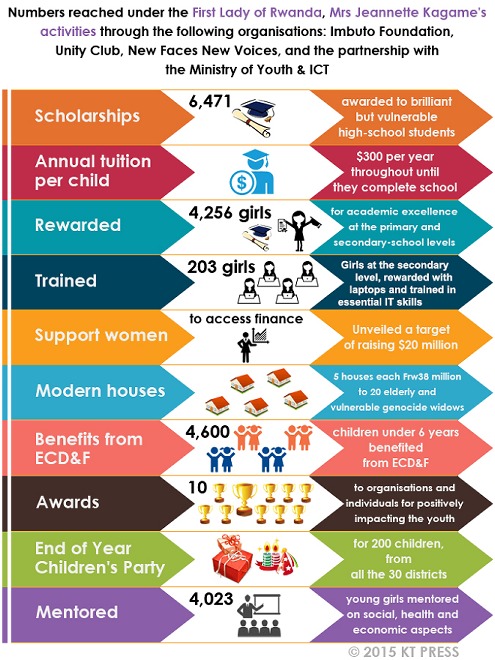