As long as there is still gender based violence and discrimination in the country, the judiciary and law enforcers will never be in good books with Rwanda’s First Lady Mrs. Jeannette Kagame.

The First Lady said injustices of any form in Rwanda must be fought vigorously and she reiterated that effort is entirely collective, but the judicially and the legislature must uproot the vice.

“Together we must continue working towards true gender equality, and put an end to any form of gender discrimination, or other injustices, causing harm to our girls and women, and preventing them [from thriving],” she said.

Mrs. Jeannette Kagame was speaking yesterday at Serena Hotel during a dinner gala to celebrate the International Women’s Day, where she said the gathering was to “reflect on our responsibilities, as women leaders and members of civil society at large, to uphold the meaning of this day.”

She said that Rwanda has, for many years now, been acknowledging the importance of women, and the irreplaceable roles they carry, for the wellbeing of the community.

But in her capacity as the First Lady and as a woman, Mrs. Jeannette Kagame’s role has been tremendous in different fields, such as education, health, social welfare, empowerment to mention a few.

Coincidentally, during the cerebration, the Minister of Gender and Family Promotions, Oda Gasinzigwa, announced that the First Lady had just received an award in   recognition   for   her contribution   in   the   fight against   gender   based   violence   and   promotion   of   women empowerment.

The award was announced during the 5th Kigali International Conference Declaration (KICD) General Assembly on the role of security organs to end violence against women and girls that took place in Algiers, Algeria on March 7, 2016.

Two more people received the award, given by the Director General of National Security of Algerian Police force Major Gen. Abdelghani Hamel; the President of the Republic of Algeria Abdelaziz  Bouteflika, and the UN Secretary General, Ban Ki Moon.

The meeting recognised that ISANGE One Stop Centre, an initiative by the First Lady, is an ideal holistic tool to prevent and respond to GBV and child abuse.

The center provides psychosocial, medical, police and legal services to adult and child survivors of gender based violence and child abuse occurring in families and the general community.

The meeting in Algeria agreed that Isange One Stop Center concept be copied and applied in other countries to address wide spread of gender based violence.

Meanwhile, the dinner, organized in partnership with the Ministry of Gender and Family Promotion and New Faces New Voices-a Pan-African advocacy group that focuses on expanding the role and influence of women in the financial sector, also celebrated the 20th anniversary of the Unity Club; an organization of former and present Cabinet Members and their spouses.

Under the Chairmanship of the First Lady, Unity Club provides its members the opportunity to promote social cohesion.

After partnering with New Faces New Voices (Rwanda Chapter), nine months ago, members have so far raised over Rwf70 million into a fund which will benefit its members to access finance and invest in profitable ventures.

“We should advocate for collective efforts, supporting vulnerable women from all fields across the country so that they can play their role in national development,” they First Lady said. 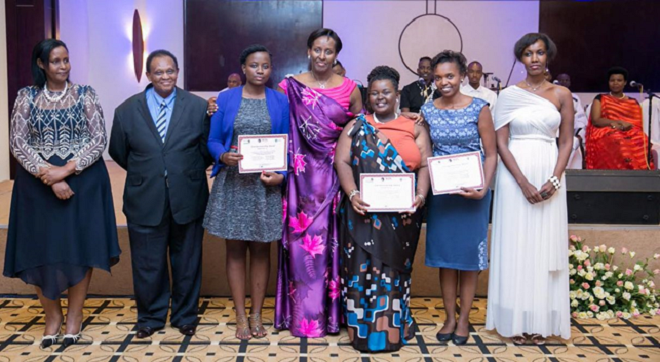