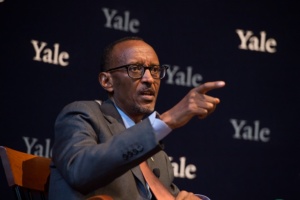 It is a pleasure for me to be at Yale, and I thank the MacMillan Centre for the invitation to speak with you today, and for the warm welcome.

It is often said that it is the special privilege of friends to speak frankly and openly to each other and that’s what I hope for here today.

This week at the United Nations General Assembly, the focus has been on implementation of two major, new agreements on sustainable development and climate change.

These pacts are proof that the United Nations remains relevant. Of course, international institutions have their flaws. Rwanda knows this from its own experience.

Nevertheless, the bias toward cooperation and dialogue in the multilateral system offers an alternative to zero-sum power politics.

That is why we in Rwanda are always happy to do our part, for example as the world’s fifth-largest troop contributor to peacekeeping operations.

At the same time, there is a growing sense of pessimism about the international community’s ability to deal with problems, such as state collapse, violent extremism, and forced migration.
Sometimes these efforts are not only ineffectual, they actually seem to make the problems even worse.

My purpose here today is to talk about what is wrong, and how I think it can be addressed.

The preservation of peace, security, and prosperity rests on a common vision for the future, anchored in shared values.
Yet today we are seeing the steady erosion of values-based solidarity, leading to real moral and ideological confusion and new instabilities, both within nations and in the mechanisms of international cooperation.

Profound change has been underway and the world order is shifting irreversibly.

Democracy is not in decline. But because of the levelling effects of globalisation, accelerated by the spread of technology and information, as well as the greater range of experiences and approaches that have been tested, we in the developing world have greater confidence to pursue the same ends in our own ways.

We increasingly base our legitimacy on results achieved and on the views of our citizens, rather than on external validation.

Some participants in the international system tend to see this shift as a challenge to their historical leadership. They continue to assert the right to define objectives and impose outcomes, without meaningful consultation with those concerned.

To justify that exceptionalism, action has to be seen in terms of moral responsibilities rather than narrow interests. Some countries simply expect to be trusted to work in the best interest of humanity as a whole.

These factors are contributing in important ways to the instability and uncertainty we face, by undermining the values-based solidarity, upon which the effectiveness of international cooperation has always depended.

What is at risk is the sense of a global community based on shared values, which the United States, Rwanda, and many others, are equally committed to. By asserting the right to define legitimacy for everyone else, trust between countries is lost, instability increases, and countries are even pushed to make bad decisions.

But one size does not fit all. The United States, for example, is huge; it may require impersonal and legalistic mechanisms to achieve adequate democratic consultation.

In Rwanda, to take another example, we have the advantage that the relationship between citizens and leaders can unfold in a more direct and face-to-face manner.

The processes may not look the same between two different countries, but the right question is whether the substantive outcomes are comparable in terms of the quality of civic engagement and the actual results achieved in the lives of citizens.

What matters is the value the system accords to each citizen, and their ability to give input and get their concerns and ideas addressed.

Nothing done against the wishes and expectations of citizens is sustainable. Supporting the persistence of the outdated norm that some can decide on behalf of others is a source of tension in international affairs.

It is not right and it doesn’t work.
Moreover the manner in which decisions of war are arrived at is truly chilling at times, as if real people don’t live in those places.

It is better to work patiently to facilitate change in society and build new consensus, while containing negative effects, rather than engage in slash-and-burn democratisation.

We can’t pour gasoline on volatile situations, light a match, and hope that the fire will cleanse and renew. Countries are not national parks and people are not trees.

An inefficient state is better than no state at all because it offers the greater prospect for sustainable improvement and transformation.

Yet it often seems as though chaos and disorder are required in order to convince others of the legitimacy of a system of governance.

It is important to step back and learn the lessons of the past errors of judgement and analysis.

Unfortunately there is little evidence that such introspection and course-correction are taking place. This leaves a vector of instability in world affairs that is of increasing concern and danger to all of us.

America and other major countries have the power to shape the world according to their designs.

However, there is an additional power that comes from working respectfully with others and valuing the input and contributions of friends.

When it comes to Africa especially there is a great deal of continuity with certain negative assumptions widely shared across governments, media, and academia, not only in this country but more generally.

Rwanda, for example, has experienced many contradictions in its relations with counterparts. Perceptions often loom larger than facts, and continued engagement is conditioned on accepting erroneous perceptions as true, even when everyone involved agrees they are not.

This is not diplomacy; it is a demand for submission. But Rwanda did not survive by giving in. If provoked, we prefer to stand our ground and defend what we know to be correct, even if there is a price to be paid.

This is not just a reflex of pride. We just believe that being straightforward is the best course, especially among friends.

After all, a willingness to obey is a poor predictor of reliability or virtue. Submission produces clients, but not partners.

It is normal for countries, whether large or small, to pursue their interests.
Let me give an example from the recent decision to phase out the sale of used clothing in our region of East Africa.
This measure aims to build our manufacturing base, and also, importantly, to fight the mindset that we are people who should generally be satisfied with second-hand things.

As we know, the United States strongly supports industrial development in Africa through programmes such as the Africa Growth and Opportunity Act.

Yet we have learned that there is some concern about our policy change because it is beneficial to some people here in some ways.

So why don’t we find a way to work together instead, so we maintain a good policy, which we all agree is beneficial, while finding a way to create new opportunities for these American firms.
There is always a solution like that, if you look for it.

I can hardly blame you, students and others, for being sometimes confused as to what is true about Rwanda or Africa. The manner in which you receive information, and have it validated, is designed to sow confusion and not build understanding.

There is a culture of making up one’s mind about Africa by borrowing assumptions, prejudices, and judgements, from trusted intermediaries, who, by the way, tend to look the same, as you may have noticed.

Some points of view are seen as inherently balanced, neutral, factual, because of who says it, and where.
But in that process many other voices are silenced. It is like being told you are uppity and have forgotten your place.

Let me give you a recent example. A Nobel Prize winner recently wrote that Paul Kagame effectively ‘farms’ Rwandan children out to Western aid donors, allowing them to save our children’s lives with heath care, in exchange for which criticism is suppressed.

Well, first, no one is afraid of criticising Rwanda, as we have seen.

Second, implicit in that logic is the assumption that Africans are motivated by animal impulses, lacking normal human feeling.

I don’t take his statement personally because he doesn’t know me or Rwanda. He doesn’t. He was just using us as a cardboard cut-out for some generic type of bad African.

It is as though the more we achieve in terms of outcomes, the more important it is to ensure that the Africans involved get no moral credit for it.

Significantly, not one participant in the online debate objected to this characterisation.

For centuries, the West has preferred to relate to Africa and similar places from a position of moral superiority. There is a word for this, which I won’t use, to avoid unnecessary distraction.

But let’s agree that it reveals a stunning failure of moral imagination and human empathy, apparently so profoundly embedded that it requires no further justification, even as it implicitly guides both foreign policy and higher education.

The United States is known for adopting a morality-based approach to global affairs. This is deeply rooted in its history and culture, and it is in fact a positive attribute, one which others are happy to join together with.

The enduringly strong relationship between Rwanda and the United States, not only between our governments, but even more so between our people, springs from the mutual recognition that we want the same things for ourselves and our planet and are working in good faith to deliver them.

That helps cushion the frictions that arise whenever actions are taken, or statements made, that implicitly deny what we share.

But the defence of universal values must focus on substantive outcomes rather than on fundamentalism about process, since clearly no one holds a monopoly of wisdom, as events have demonstrated.

Imagine how much more we could do together, how much safer and more hopeful our world can be, if we always relate to each other in a spirit of humility and mutual respect, united against the many radical forces seeking to change the globe beyond all recognition.

A major responsibility lies on young people, both in my country and here in this one, to resist easy superficiality.
Get to know the world directly. Don’t just read an op-ed or sign an online petition and assume that that is the end of the story.

To lead the world and make it better, you first have to understand it.

Be as humble, as you are curious. Be contrarian where needed, and ready, where necessary, to fight for what is right.

But let’s all remain open to having our views and understandings improved through a better comprehension of what others have endured, and what they want for their future, and what they can contribute.

I thank you very much.

NOTE: The Speech was followed by Q&A. More related content will be published as soon as available. EDITOR