Exactly one year after dropping arrest warrants against 40 Rwandan officials, Spain could be trying to turn Rwanda into a punching bag again.

Last month, when Iratxe García Pérez -a Spanish politician led a delegation of 8 Members of the European Parliament to Rwanda to share best practices on rights of women and gender equality, later chose to author a report totally different from the purpose of their visit from September 19-22nd.

During their visit, some of the EU MPs attempted to visit Victoire Ingabire-a genocide convict in prison but were denied access. Rwandan authorities told them meeting Ingabire was not on their official visit schedule.

While back home, the eight EU MPs wrote a five-page resolution titled; Rwanda, The Case of Victoire Ingabire but Rwanda parliament considers this report an attack on the country’s sovereignty.

Justice Minister Johnston Busingye told KT Press, “I can say three things; It is disappointing that the EU Parliament can attempt to behave in a patronising, imposing and arrogant manner. I thought this day and age was for partnership. Secondly, the resolution is a mumble jumbo shopping list with no ascertainable value. It is not based on facts or any attempt to establish them.”

He also suspects that the EU MPs who sponsored it, “either forgot what mission they had been to Rwanda for or they are geniuses at connecting things. The so called resolution and their mission to Rwanda seem, to us, to be totally unconnected.”

On Monday, during a joint session bringing together the lower house and Senate, the Rwandan parliament agreed to ask the European Union parliament to officially withdraw the resolution on Ingabire’s case.

“I would like this parliament to make this resolution an outright attack on the sovereignty of Rwanda,” said Hon. Adolphe Bazatoha the chairman of parliamentary committee on Unity, Human Rigths and the fight against genocide.

While reading the final resolution, Bazatoha said that the report disregards the country’s judicial system on handling Ingabire’s case, saying that judgement was based on evidence presented before court.

Rwandan MPs agreed to use all possible platforms to ask the EU Parliament to withdraw the resolution that Rwandan parliament says intends to divert the development agenda of the country.

Also the joint session found that the resolution was done by only three EU MPs out of the eight guided by their country’s negative intentions against Rwanda. Five of the EU MPs delegation members are Spanish, two British and one Belgian.

“There are some European countries hiding behind their MPs to waste our time, but we won’t allow,” Bazatoha said.

Senate President Bernard Makuza says the resolution by Rwanda parliament demanding the withdrawal of this EU MPs report is an indication that Rwanda is sovereign.

He also said the EU resolution contains hidden intentions by some EU MPs to distract their fellow MPs from Rwanda’s economic progress and improved livelihoods.

Rwanda parliament agreed that the EU delegation should ask for forgiveness from Rwandans for making resolutions that disrespect their decision on how they should be governed.

“It means that they had already prepared the resolution but they wanted to first reach on Rwandan soil, because they knew they could not just write from home and be accepted,” said Hon. Theonaste Karenzi.

For Hon. Gaston Rusiha, the resolution is a witch hunt against Rwanda and such acts amount to genocide denial.

“MPs who flew from Europe to learn gender best practices and ends up asking to see genocide perpetrators,” he added, “we don’t want those 8 MPs to come back to Rwanda before they ask  for forgiveness.”

“I don’t know where they get the guts of picking one criminal who gets three meals a day while enjoying all privileges disregarding the genocide survivors,” Hon. John Rukurwabyuma said. 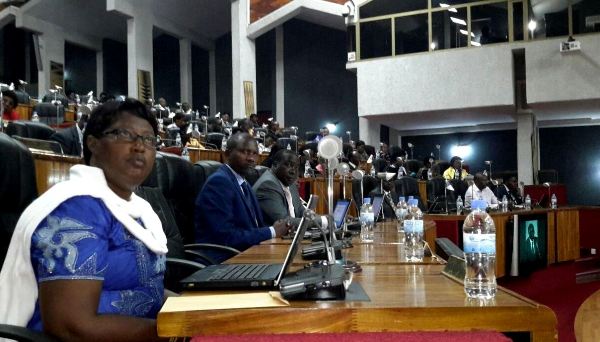