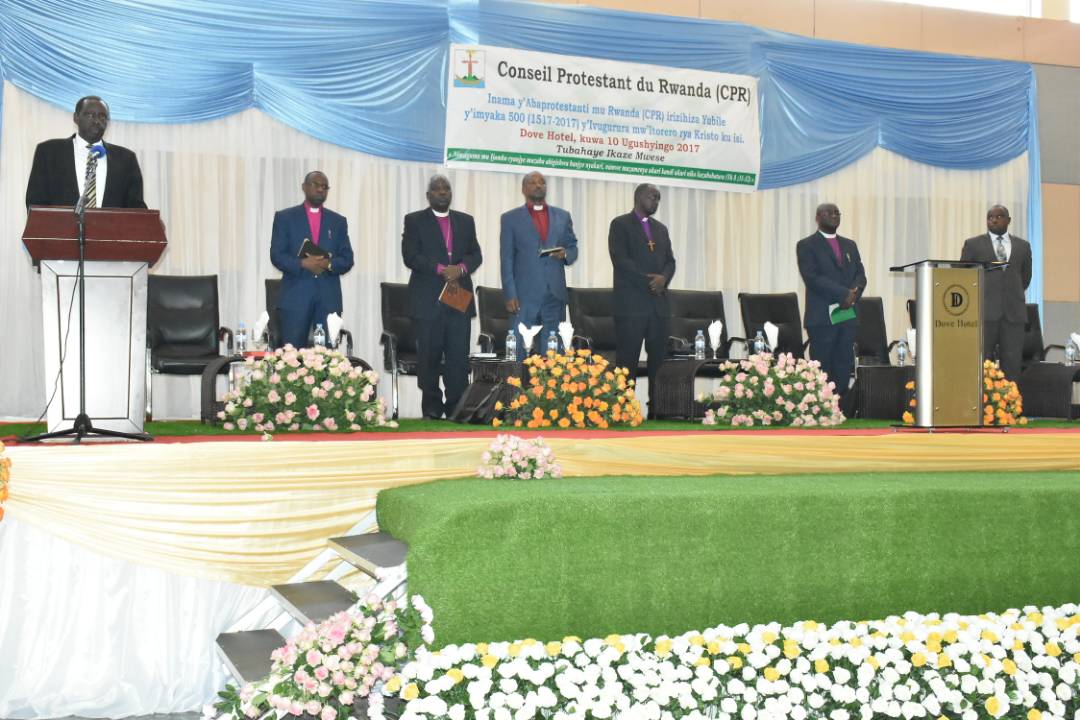 CPR leaders during celebration of 500 years of Protestantism

The president of Protestant churches in Rwanda Bishop Alexis Birindabagabo has declared war against pastors who deviate from their mandate of preaching the gospel and involve Christians in fornication and other sins.

Bishop Birindabagabo said this while presiding over celebration of 500 year anniversary of Protestantism in the world.

Brindabagabo who is the.President of CPR, an association that brings together over 5 million Christians from all the protestant churches in Rwanda (Episcopal, Methodist, Lutheran, Baptist, and Evangelical Friends Traditions).

The Protestant church has vowed to fight unwanted pregnancies, drugs and sexual harassment across the country.

A recent survey conducted by CLADHO – an umbrella of 12 human rights civil society organisations discovered that between months of July and September this year, an average of 25 girls were impregnated every day in Western Province.

Most culprits have been men – especially drug addicts, but also teachers, men of God have been accused in such cases.

According to Ministry of Gender and Family promotion, in Rwanda, despite all efforts, measures and actions put in place to fight teenage pregnancy, young Rwandan girls still get impregnated at unprecedented rate.

Birindabagabo said that CPR is launching what he called ‘a war’ on all these cases.

“We are launching a war of prayers but will also take other serious measures against illicit drugs and those involved in causing early pregnancies” Birandabagabo said.

“This force is enough to help government deal with such cases,” Birindabagabo told members.

He went on to pin some pastors and heads of churches who are caught up in bad behaviors of promoting fornication.

“I will not fear to kick out any pastor who promotes fornication in our churches. We cannot allow to have children with no legal fathers,” Birindabagabo told Protestants gathered at Dove Hotel.

“Imagine a pastor planning to have special prayers with another man’s wife. This is happening in some churches. This must stop,” Birindabagabo added.

Dr. Usta Kayitesi, Deputy CEO at Rwanda Governance Board who attended celebrations said that with 5 million members of the church, all issues affecting the society can be uprooted.

“I believe that with 5 million members, you have a representative in every village of this country. This can be the easiest way to help us fight all sorts of social issues affecting our society,” she said.

It’s a Must Win against Ethiopia, says Amavubi Coach Hey