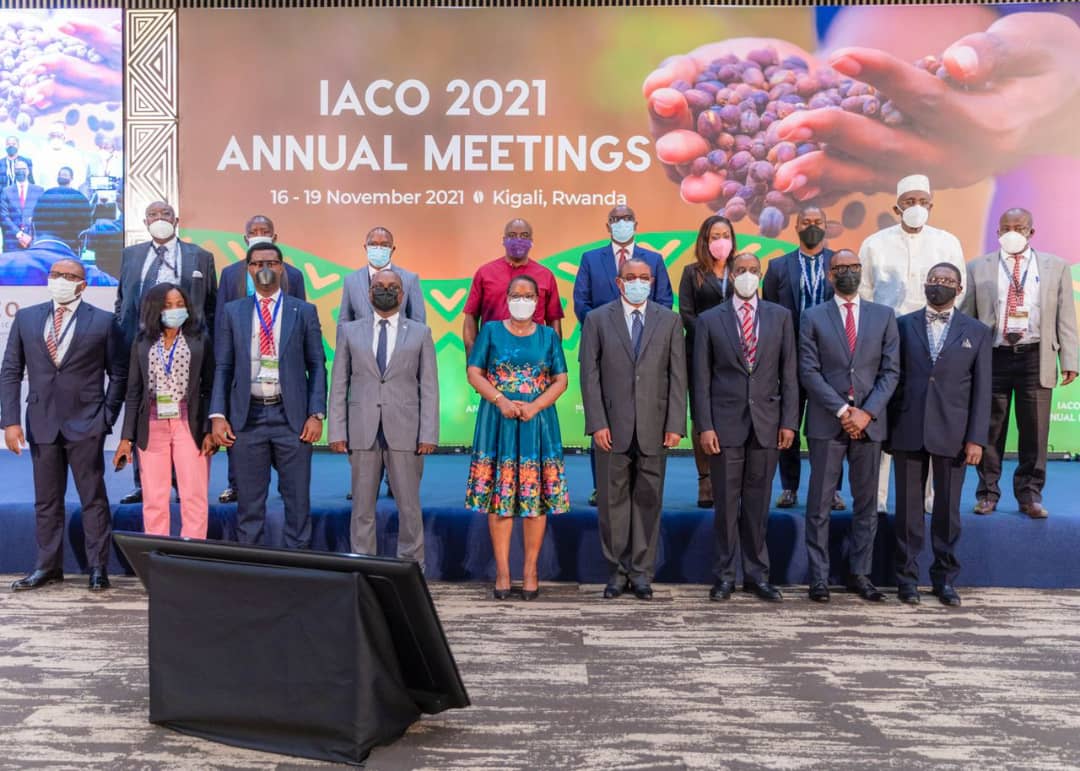 African Coffee producing countries meeting in Kigali city have made a commitment to improve the Africa’s coffee production, global impact and improved lives of coffee farmers.

The annual Inter-African Coffee Organisation (IACO) was opened this November 15, 2021 by Rwanda’s Minister of Agriculture and Animal Resources, Dr. Gerardine Mukeshimana who is also the current chairperson of IACO.

The meeting which is held under the theme ‘strengthening the coffee value chain for sustainable development of the economy and improving living incomes of African producers’ will run from 16th to 18th November 2021.

About 300 delegates including government officials, IACO, researchers, coffee businesses, policy makers, representatives of renowned coffee companies will participate in the forums to discuss possible ways of improving the state of coffee production among the 25 ICAO member states.

With the Africa Continental Free Trade deal in place, Dr. Mukeshimana said that Africa coffee-producing countries must ensure the transformation of the coffee industry from subsistence to a modern one.

“Our countries need to adopt new coffee policies that will ensure the sustainability of the coffee sector in Africa. This requires increasing production, improved quality, local processing, and consumption of coffee in Africa. To achieve this, we aim at ‘strengthening the coffee value chain for sustainable development of the economy and improve living incomes of African producers,” Mukeshimana said.

The minister said that there is need to change the way coffee benefits each in the value chain towards being more profitable for farmers who are at bottom of the value chain and yet play critical roles.

“Farmers should be motivated to invest in improved and sustainable agronomic practices to join hands with other stakeholders to drive a prosperous coffee industry.”

She said that if farmers are facilitated to invest this should be seen in results of presence of African coffee in local and international markets.

ICAO Secretary General, Ambassador Solomon Rutega expressed optimism in this suggestion revealing that with support from Africa export import bank (Eximbank) and Ecobank, ICAO plans to set up an African Coffee facility- (which was delayed by the COVID19 pandemic) but also financing small holder farmers to acquire equipment at primary and secondary coffee production level.

Rutega also committed that through his African coffee promotion vision dubbed “Drink African Coffee Build Africa” (DACBA) the initiative will support the industrialization of the African coffee sector and create employment for the youth.

In the same thinking, Abah Ofon, a representative of Africa Exim Bank said that they intend to build a relationship towards increased coffee value chains on the continent as part of attaining the commodity led African Union Agenda 2063.

“As Africa, we have the capacity and authority to make the coffee sector what we want it to be,” said Hailemariam Desalegn, the former Prime Minister of Ethiopia and Patron of IACO.

Jose Sette, Executive Director International Coffee Organization (ICO) and Josefa Leonel Correia Sacko Commissioner for Rural Economy and Agriculture showed optimism to improve global coffee markets and consumption due to relaxed business and activities during the pandemic especially in the European countries which are among the largest consumers.