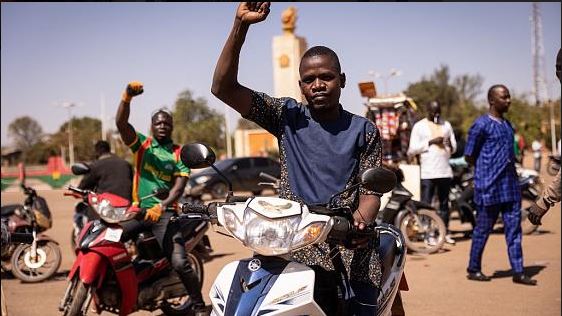 Only since the government had categorically denied a military coup had taken place, the Army in Burkina Faso has announced it had ousted the President, suspended the constitution, dissolved government and national assembly, and closed all national borders.

The announcement presented by Lieutenant-Colonel Paul-Henri Sandaogo, was made in the name of the hitherto unknown, Movement for Safeguard and Restoration (MPSR).

The army said that takeover was achieved without any violence, and all those detained, were safe, in an undisclosed location.

The statement said the army was united in the decision to end President Roch Kabore’s tenure in office, citing the security situation, and what according to the statement, was his failure to unite the country.

The announcement follows unrest in several military barracks, during which soldiers mutinied, issued several demands, including replacement of the military high command.

The government had immediately dismissed reports of a military takeover, saying the soldiers’ demands had not included the removal of the President. HYPERLINK

The regional block, ECOWAS (Economic Community of West African States) which has already imposed heavy sanctions against Burkina Faso’s neighbour Mali, following a military coup there, has condemned the actions of the Burkinabe army, which it termed an attempted coup.

“ECOWAS is following with great concern the evolution of the political and security situation in Burkina Faso, characterised since Sunday 23rd January by an attempted coup d’état. ECOWAS condemns this extremely grave act.”

Reports from the capital Ouagadougou say calm has returned, with people and traffic moving normally. There has not been a repetition of Sunday’s gunfire.

So far, the military will feel that international opinion, including from the African Union, and ECOWAS, has been reassuringly bland. The demand to ensure the safety of the President, had already been met, if the army’s own statement is to be taken at face value.

The military also continue to enjoy the support of the country. This may change, depending on how they themselves proceed.