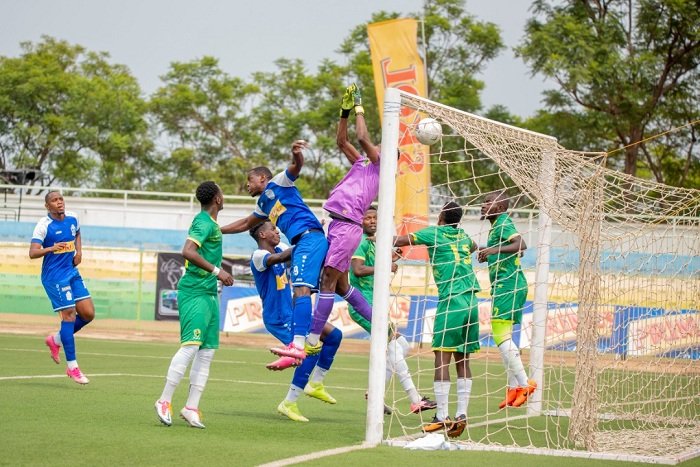 AS Kigali and APR played a goalless draw while Rayon Sports were hammered by Marines FC.

During Saturday afternoon’s games, Kiyovu Sports came from behind to kick off Matchday 14 with a 2-1 against Espoir FC at Kigali Stadium.

Ndayishimiye Thierry and Bigiriman Abedi found the back of the net in the second half as Kiyovu overturned a 1-0 half-time deficit after NKURUNZIZA Félicien put the host in front in the 28th minute.

Meanwhile, the Ugandan coach Mike Mutebi took to the AS Kigali dugout for the first time in Saturday’s match of the day which saw AS Kigali and APR sharing spoils in 0-0 draw, leaving disappointed those that would have been looking for goals.

Rayon Sports interim coach Marcel Lomami fielded a much-changed side without the likes of Onana Willy,Muvandimwe JMV, Nizigiyimana Karim Mackenzie and Nishimwe Blaise, found themselves behind after 19 minutes following Amimu Nahimana’s header while a second-half brace by Fiston Ishimwe sealed the victory for Marines.

It was no more than a deserved for the Rubavu boys who were sharper and hungrier.

Mukura got back to winning ways with 3-2 home victory against Musanze thanks goals from Muhoza ,Djibrine and Patrick while goals from Ocen and Kwizera were not enough for Musanze.

Elsewhere, Gasogi poor run continued with a 2-0 defeat by Etincelles.Ciza Hussein and Isaie Songa scored to secured important three points for the relegation-threatened side.

Matchday 14 continues today with two teams at the bottom of the table, Gorilla FC and Etoile de l’Est FC fighting for the survival at Kigali Stadium while Rutsiro FC entertain Gicumbi FC at Umuganda Stadium.

Playing for the first time under their new coach Etienne Ndayiragije, Bugesera will visit Police FC.