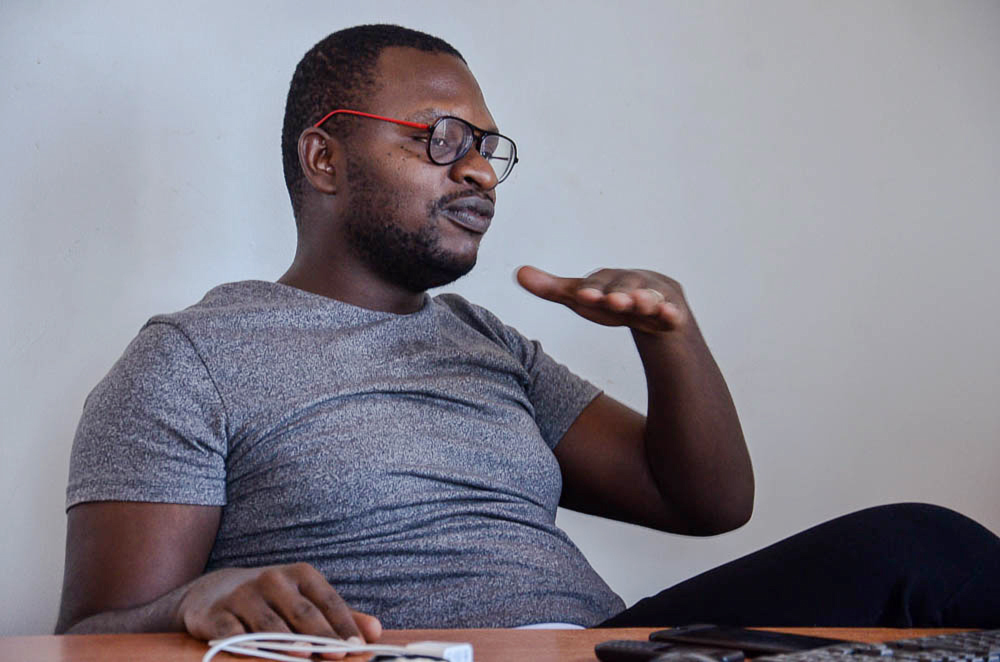 Giles Muhame and his Chimp Reports have become purveyors of fake news about Rwanda.

Some Ugandan writers have been attempting to sabotage efforts to restore good relations between Kampala and Kigali. “Inside Story: Why Rwanda’s Kagame Agreed to Reopen Border”, published on February 5 by Giles Muhame of Chimp Reports, is one of such attempts. Truth is, there was nothing “inside” about Giles story. Neither was it a story since all he did was merely to turn upside down Andrew Mwenda’s story titled “Kayihura, Kagame, Museveni” from August 2018.

Muhame’s “inside story” begins with an unbelievable claim that “Relations between Uganda and Rwanda had blossomed until 2017 when President Museveni appointed army officer Brig Abel Kandiho as head of intelligence”. The lie is meant to erase the decades long destabilization attempts by placing the conflict between the two countries to recent times.

In the same vein, the suggestion by Muhame that the Chieftaincy of Military Intelligence’s (CMI) operations were targeting sleeper cells of Rwandan spies is meant to justify the mass arrests and torture of Rwandans. He attempts to justify the failure to bring evidence to the accusations of spying involving hundreds, including children and elders, rounded up across Uganda, detained in ungazetted dungeons, tortured and dumped at the border.

The case of Rene Rutagungira, which Muhame refers to, is revelatory. It speaks volumes that even the assailants who attacked Rwanda and who were found with phones implicating Philemon Mateke, a high-ranking government official, were not tortured for two years without being brought to courts.

Instead, after their capture, files were prepared and sent to courts of law to decide their guilt. All Rwanda demanded from Uganda was, if these people are spies, to take the evidence to the courts because failure to do this only underscores their innocence.

If Rutagungira’s phones gave leads of “hundreds of raids and arrests of suspected Rwandan spies,” as Muhame suggests, then why wasn’t the phone that apparently led to other so-called spies used in court the same way Rwanda did with those caught with Mateke’s contacts?

Furthermore, contrary to Muhame’s disproven claims, Lt Mutabazi was not repatriated by Rutagungira. He was part of an exchange of criminals between Uganda and Rwanda under a bilateral memorandum of understanding that benefited Uganda more than it benefited Rwanda. It is therefore not clear what “illegal repatriations” Muhame keeps referring to.

More misrepresentations, half-truths and shallow analyses can be found in Muhame’s inside story.

For instance, Philemon Mateke was made minister the same year RNC recruits were intercepted by the Ugandan police at the Kikagati border post. The arrest led to a showdown between CMI and Police in which the latter lost. Uganda officials first claimed that these were youth going for “missionary work” in Bujumbura but soon after, in March 2018, concessions started to come.

“A group of Banyarwanda was being recruited through Tanzania and Burundi to go to Congo. They said they were going for church work but when they were interrogated, it was found out the work wasn’t exactly religious.”

Later that year, FDLR officials who were intercepted at the Bunagana border confirmed Mateke’s role in their meeting in Kampala, which aimed to create an alliance with RNC. The following year, 2019, the mobile phone of the commander of the attack on Kinigi showed that he had been in contact with Mateke in the lead up to the assault. In other words, Mateke is exactly who Chimp story says he is: a Hutu Power hardliner with deep ties to the former Habyarimana regime.

Muhame talks about Mateke being rewarded. But the part he conveniently leaves out in his cheap justifications of efforts to destabilise and economically sabotage Rwanda is this: Mateke was resurrected in order to be used as a means to facilitate cooperation between RNC and FDLR.

Even on the issue of 5th freedom rights for Rwandair, Muhame stumbles around without showing why Rwanda’s airline was singled out and denied traffic rights when other operators, even European airlines, were free to pick up passengers in Entebbe.

As for the electricity project which was meant to allow Rwanda’s access to cheaper energy sources, “Rwanda had proposed to fund the transmission in Uganda to its border. However, Ugandan officials turned down the idea, saying Kampala would fund the connection,” Giles writes, without acknowledging that they never did.

Muhame insists that Uganda’s decisions were for “economic” reasons. The argument would hold if “economic reasons” are reduced to keeping Rwanda reliant solely on Uganda’s supply of electricity. These are acceptable terms for the supplier but which any country that is attempting to reduce its cost of energy would oppose. But Rwanda, as any country with interests would do, will always retaliate whenever its interests are undermined.

On the railway and electricity, Rwanda’s concern is Uganda’s unilateral decisions, which Muhame calls “prioritization” that contravenes the decisions taken by the coalition of the willing. In Rwanda’s view this was blatant economic sabotage, especially given its willingness to fund it that was dismissed without cause.

Furthermore, Muhame fails to explain why economic deals with Rwanda’s enemies are deemed more important than economic and brotherly relations between two countries. For instance, Rujugiro’s investment of $20 million is preserved, but Kampala is willing to sacrifice over $350 million in exports to Rwanda. Here Muhame is involved in voodoo economics trying to justify the unjustifiable.

Muhame loses any ounce of credibility when he invokes CHOGM as a reason for opening the border. “Kagame didn’t want a bad reputation of hosting Commonwealth countries when the border with his closest neighbour was closed,” he writes. This one is actually a hilarious claim. CHOGM has been postponed twice and in the two instances Rwanda did not open the border. Does Muhame think that CHOGM was postponed on each occasion because the border remained closed?

“Kigali officials suspected France was training Uganda’s Mountain Division as part of preparations to attack Rwanda,” Muhame goes on as if he knows nothing about history. Beyond training them, the French can even fight for Ugandans and it wouldn’t worry Kigali. It would not be the first time RDF meets different armies on the battlefield.

As for the celebrations of Ugandans and Rwandans at the opening of the border, it is obvious that the two countries need each other. But the real celebration for Rwandans will be when Uganda stops its destabilizing operations and for them to be assured that they can be safe in Uganda the same way Ugandans are safe in Kigali.

If Giles Muhame wants the “Bots” to stop sabotaging efforts to bring peace between the two countries, he ought to take a closer look in the mirror. In the meantime, one thing remains clear: Rwanda will retaliate whenever its interests are sabotaged.

As a Bot would do, Giles Muhame peppers the names Byusa and Rwivanga in the story to give it an “inside” edge. But that too falls flat!

Ndamage Jean Damascene Is The New MUKURA VS President