Home Obituaries Madeleine Albright, An Enviable Legacy, And Some Lessons For Africa
Obituaries

Madeleine Albright, An Enviable Legacy, And Some Lessons For Africa 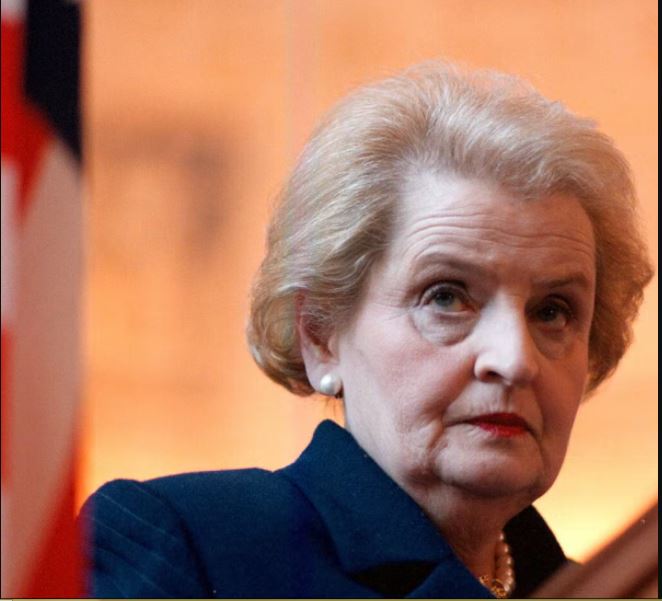 The former United States of America, Secretary of State, Madeleine Albright, who has died aged 84, leaves an enviable legacy of a life well lived. For Rwanda, however, she was one among the powerful and influential voices, who on their watch, called for a policy of the lethal indifference to one of the worst crimes against humanity, of any generation.

The people of Bosnia-Herzegovina will rightly remember Madeleine Albright, as someone who played a major role in the survival of the country and its people.

The worst period in the country’s history, coincided with Albright’s tenure, as first, the United States of America’s Ambassador to the United Nations, and then the first ever female US Secretary of State, effectively in charge of America’s foreign policy.

A native of the former Czechoslovakia, whose parents emigrated to the US, when she was just a child, Albright nevertheless kept up an interest in Eastern Europe, especially as an academic at Georgetown University. She would be a strong advocate for intervention in the Baltic conflict, as Serbian nationalists, waged a war of extermination, against their Muslim neighbours.

In 1994, when Albright was already settled at her desk, in New York, as the US Ambassador to the UN, the Hutu Power ideologues in Rwanda embarked on what they saw as their “final solution” for what they called, the “Tutsi problem.”

The US, along with the United Kingdom of Great Britain, led the UN Security Council decision, to what can only be described as the abandonment of Rwandan and Rwandans to their fate. It was a fate so harrowing, those among the victims, who could, paid their murderers for a quick death.

France, which was keeping the mass murderers supplied with arms, moral and political support, had of course campaigned for such an outcome. We now, commonly hear that if only the international community had known what was taking place in Rwanda. They of course, did know, but chose to avert eyes, and turn backs.

Like a number of others, in powerful positions, at the time, Madeleine Albright, would later, express her regret, and say, that she was only an ambassador representing a policy of her country, but now wishes she had argued harder. We must take her at her word. She would go on to co-chair the US’s Genocide Prevention Task Force.

Indeed, to see her as anything other than a perfectly decent human being, would be to draw entirely the wrong lessons. The right lesson, which ought to clear by now, is that when it comes to Africa, different rules always apply.

Then President of France, Francois Mitterrand’s dismissive remark, about the genocide against the Tutsi, that “in such countries genocide is not so important” may have been offensive in the extreme, but it was also instructive.

Given that his country was fully complicit in a genocide, in which over a million men, women and children had been murdered, it was a chilling attitude. But it is also one that was representative not just of France, but of the West in general, when it comes to Africa, and Africans.

Had the intended extermination of an entire people, been in any corner of Europe, you can bet that there would have been no question of the UN Security Council not knowing. In such countries, genocide is certainly important. It is regarded as what it is, an unimaginable horror against not just the targeted group, but all of humanity.

Unfortunately for the victims, the crime, long planned, and prepared, was in the heart of Africa.

As instructive, was the irony that the head of the UN’s peace keeping mission, as Rwanda was being abandoned, was an African, Ghanian career diplomat, Kofi Annan, as was the Secretary-General of the UN, Egyptian Boutros-Boutros Ghali. Neither would raise a voice for the men, women and children, who were being murdered in an African country, as Albright raised hers, for the victims of Bosnia-Herzegovina.

One of Kofi Annan’s later comments about Rwanda, was almost a finger wagging at Rwandans, in a defensive remark that it was they who had been guilty of their own genocide.

That a remark, which in every other circumstance, would be condemned as insensitive, and ill chosen, especially, by such a distinguished diplomat, was instead, then, as now, hailed by many commentators, and journalists, in the West, as “courageous” also has lessons of its own.

The inference seemed to have been, that it was not the international community to blame, but Rwandans themselves.

That of course, ignored the fact that the Rwanda Patriotic Front (RPF) leadership, which fought to end the genocide, and its ideology, never lost an opportunity before, during, and after the genocide, to make it clear to the world, that all Rwanda asked, and expected, was for the international community to fulfil its role, not shoulder a responsibility that properly belongs to Rwandans themselves.

The international community was, and is blamed for what it did, and did not do, within its stipulated remit, and Rwandans would find their own way of coming to terms with adopting a foreign ideology, that would inexorably lead to the unspeakable mass murder of their own. That the responsibility for this, was theirs and theirs alone, was not something they needed to be reminded of by Kofi Annan, or indeed anyone else.

In a world where women are still discriminated against, in favour of their sons, brothers and fathers, Albright deserves to be remembered as a distinguished woman, who blazed a trail for other women.

Now, reunited with Annan, Boutros-Boutros Ghali, they might all reflect, that while Rwanda remembers, it has forgiven worse, and wishes them nothing but eternal peace and rest.

Hear Us Out! Victims of FLN Attacks Petition the U.S, Belgium & EU to Consider Their Plight