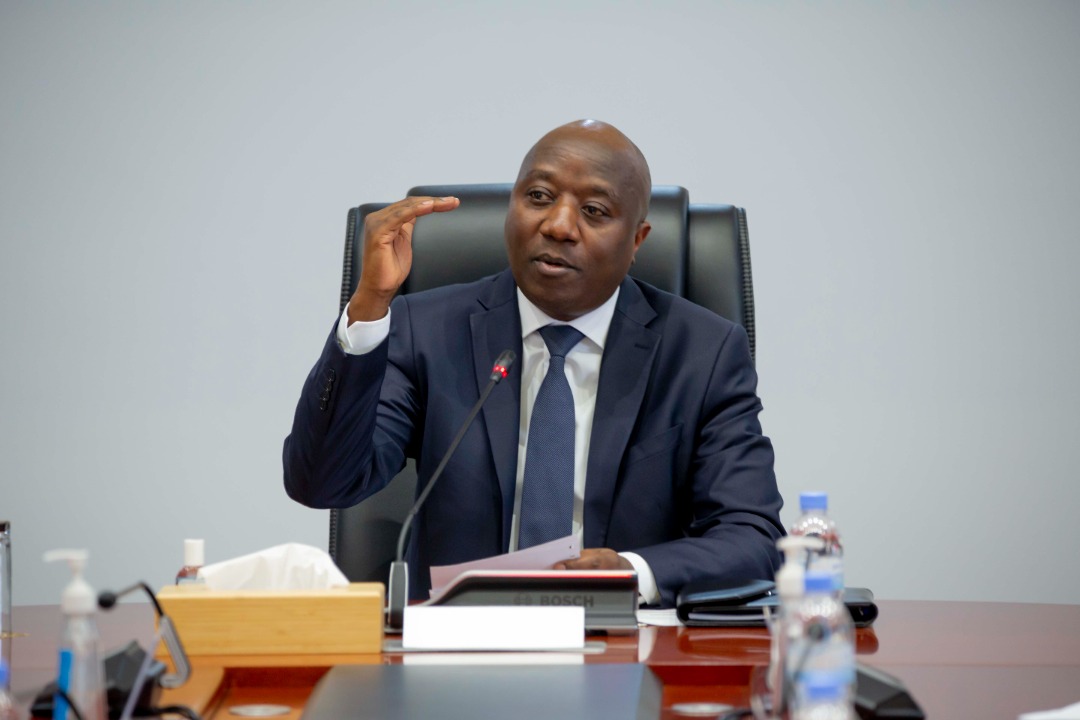 The Prime Minister, Dr. Ngirente explained that without incentives and subsidies, the impact of Covid-19 on the economy could have been worse.

Without Government incentives and subsidies, Rwanda’s economy could have suffered a more devastating impact from Covid-19 over the past two years after the pandemic disrupted markets and economies across the globe.

The Prime Minister, Dr. Édouard Ngirente, said on Wednesday that the Government of Rwanda has had to come up with different subsidies on key services such as public transport and on pump prices to ensure that Rwandans don’t feel the full brunt of the global price hike.

Dr. Ngirente made the observation during a press briefing on the state of the economy, the issue of increasing commodity prices, post Covid-19 recovery plans and on relations between Rwanda and other countries, among other issues.

The Premier gave a background of the current economic situation and inflationary pressures, attributing it to Covid-19, dispelling reports that the volatility in prices could be linked to the Russia-Ukraine Conflict.

PM Ngirente emphasized that the increase in commodity prices is being felt across the globe, given how the pandemic disrupted economies and markets and Rwanda couldn’t have been the exception.

“Covid-19 affected all economies across the globe and disrupted trade. The increase in prices was not felt in Rwanda alone, it is a global phenomenon. Globally trade declined by nearly 8.2 percent in 2020, continuing through 2021,”

“When such disruptions happen, Rwanda feels the impact because we don’t trade alone. It is for the same reason that we had to revise our economic growth targets. Before Covid-19, our aim was to average an annual economic growth of 9.1 percent, but when the pandemic hit, growth plunged below 3 percent and at some point even below zero,” Dr. Ngirente said.

He pointed out that before Covid-19, Rwanda was well on track to achieve the growth target, having registered an economic growth rate of 9.5 percent in 2019 but like other economies across the globe, the pandemic presented a major setback.

“If you look at how the sectors were performing before, Agriculture was growing by 6.1 percent in 2018, in 2020, it went below 0.9% even when we tried to ensure that agricultural activities continue during Covid-19 restrictions,” Dr. Ngirente said.

The PM said that agricultural output was not only affected by Covid-19 but also other factors, including climate change, which has been blamed for the changes in weather and seasons. 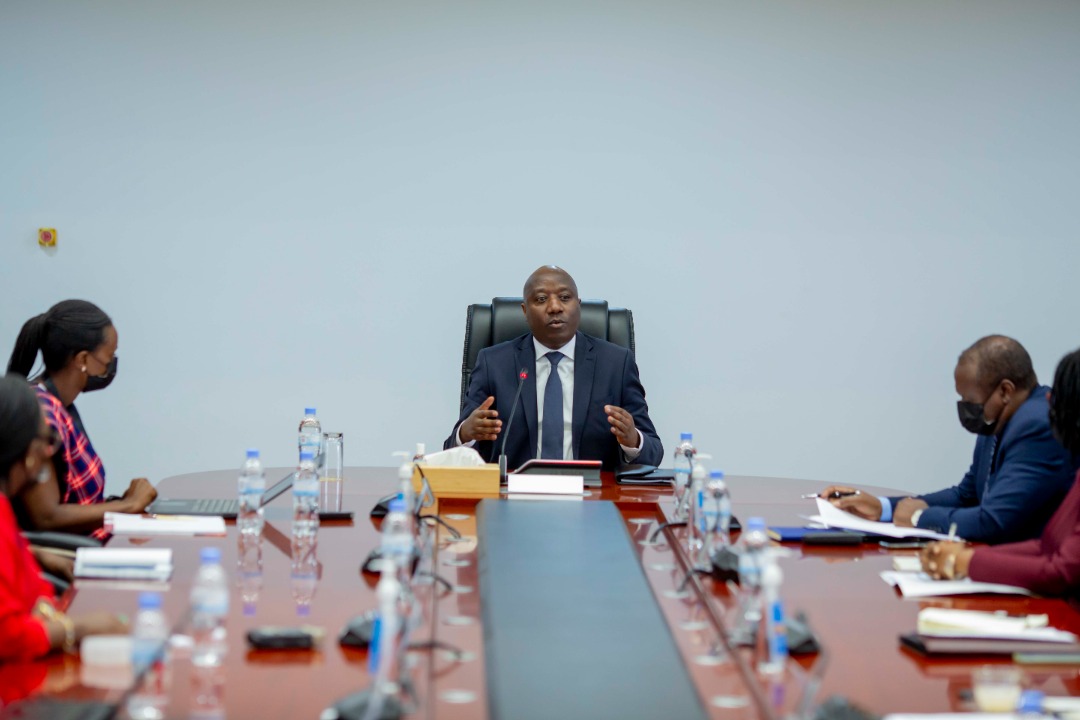 Dr. Ngirente said that some parts of the country such as the Eastern Province suffered from drought and unpredictable weather patterns which affected productivity over the past couple of seasons.

“As you might know, the Eastern Province, which is a source of most cereal or grain-based foods, faced a challenge of drought, which not only led to a decline in the produce but also the quantity of what we have in storage,”

“As a result, the government came up with a sustainable solution, which is deploying irrigation mechanisms and today we are seeing an improvement. The efforts are paying off and we hope to see an increase in yields,” Dr. Ngirente said.

Gov’t to the rescue

Responding to the challenge of increasing commodity prices, Dr. Ngirente said that the government did whatever it takes to cushion citizens from the trickle-down effects of volatility in prices across the globe by initiating a number of subsidies aimed at minimising the impact.

The Premier said that the current price hike and economic shortfalls can be attributed to Covid-19, which certainly increased the cost of trade and doing business.

Dr. Ngirente, said that today, the cost of importing goods increased nearly ten-fold, where previously the cost of shipping a container of goods from China to Rwanda cost about $1,500 but today it costs between $ 8,000 and $ 10,000.

“Over the past two years, oil prices have risen sharply. Today a barrel is at $123 but before 2020, it was at $63, meaning that the price of oil has doubled in two years,” Dr. Ngirente said. 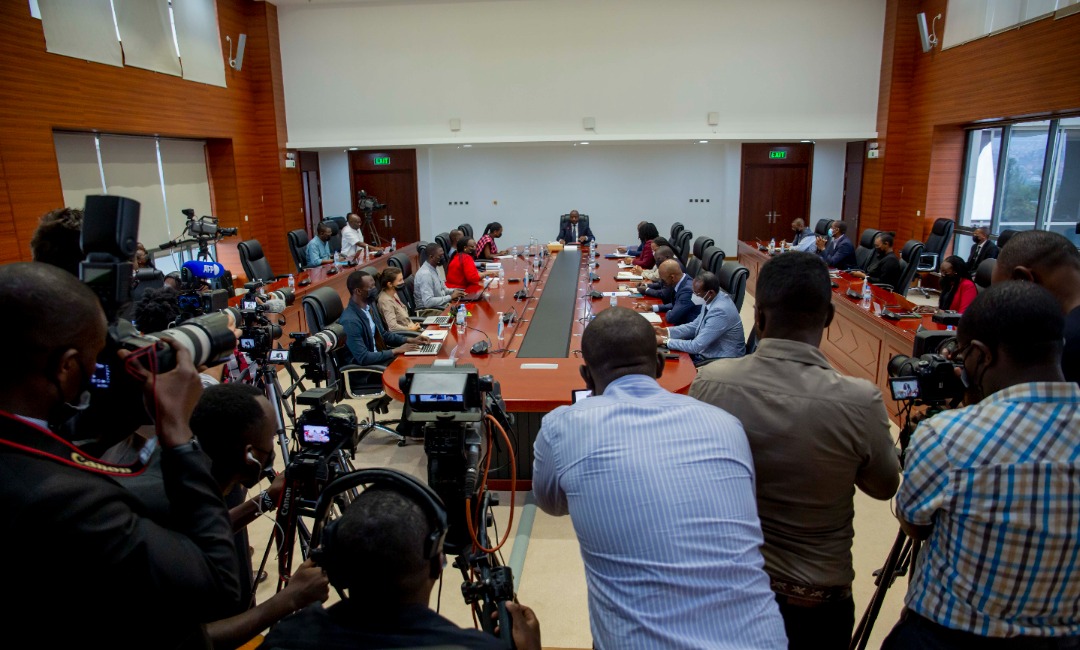 The PM said that measures have been taken by the Government of Rwanda to further boost the economy and protect citizens from bearing the impact.

An example he mentioned are pump prices which are revised every two months, pointing out that when the price continued to increase at the world market, the government came in with an incentive to top up so that the cost is not transferred to the consumer.

He said that this was more evident during the Covid-19 pandemic, where the government came up with measures to safeguard citizens against the increasing prices.

Dr. Ngirente said that in May 2021, the government committed to incur the additional cost on fuel, where a litre of diesel was supposed to cost Rwf1, 090, based on prices at the global market, but the government subsidized it to Rwf1,054.

On the other hand, at the time, a litre of petrol (premium) would cost Rwf1,161 based on existing market prices but with a government subsidy, the price came down to Rwf1,088.

“As of March 2022, the government continued to subsidise fuel prices to make it more affordable. Currently, a litre of fuel costs Rwf1, 256 but without a government subsidy it would cost Rwf1, 287,”

“The price of diesel currently stands at Rwf1,201 but it would be Rwf1, 262 without a government incentive. This is one of the measures the government takes to keep the prices of commodities in check,” the PM said, indicating that without such incentives, the situation would be even worse.

He said that the fuel subsidy has had a direct impact on transport fares, putting a difference of up to Rwf1,000 on upcountry routes and about Rwf200 in the city.

The Premier said that without a government subsidy, a journey from Rubavu to Kigali would cost Rwf4,040 but today it is Rwf3,310 while a trip from Nyabugogo to Kimironko would cost Rwf318 as opposed to Rwf253.

It was revealed that the government has so far put Rwf39bn of the ERF in the transport sector alone, in form of subsidies, working capital and loan servicing to safeguard operators.

Dr. Ngirente also pointed out that the government will continue to invest in post-Covid recovery plans, scaling up the Economic Recovery Fund (ERF) from Rwf100bn to Rwf350bn, pumping it in key sectors that will get the economy back up and running. 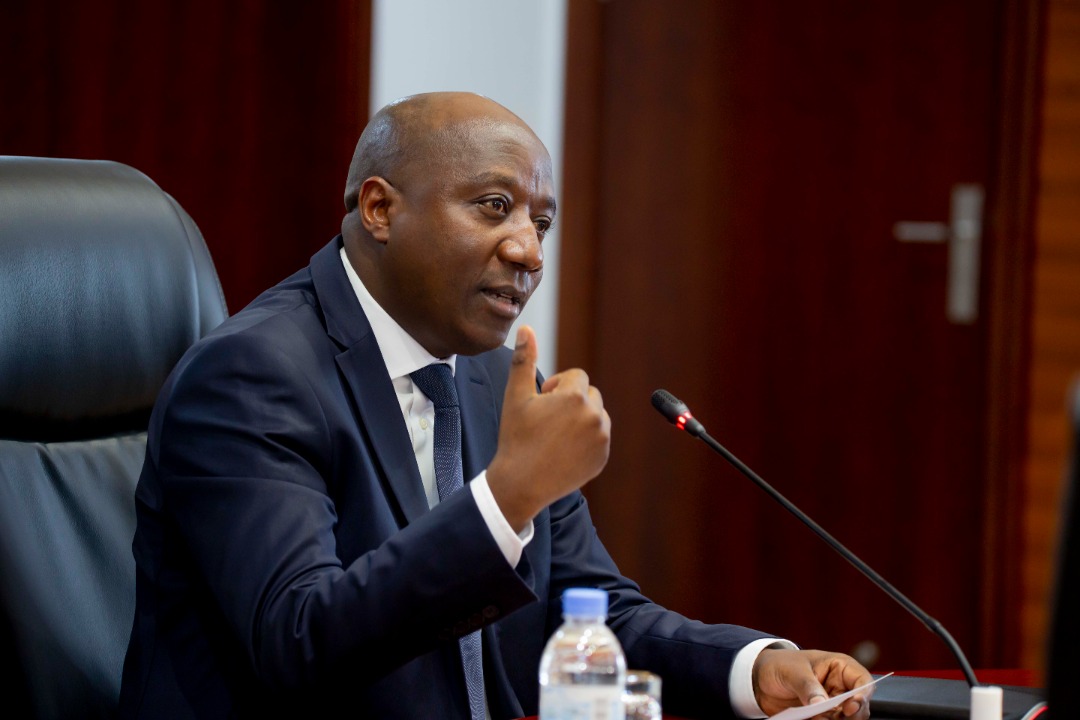 He pointed out that assessment done showed that the money disbursed under the ERF has helped the economy to restart, particularly the tourism and service sectors which are currently getting back on their feet.

Dr. Ngirente said that as part of the recovery plans, the government is supporting the private sector to fully recover while more efforts are being directed towards strengthening local manufacture through industrialisation, to cut down on imports.

Among other things, he said that the government assessed and supported the establishment of 38 new industries manufacturing essential goods and are expected to be fully operational over the next two years.

To boost agricultural output, PM Ngirente said the government is subsiding fertilizers, where farmers pay Rwf882 per kilo of NPK fertilizer instead of Rwf1, 357, among other incentives to increase productivity.

Trade with other countries

PM Ngirente also addressed a number of questions regarding Rwanda relations with neighbouring countries, which directly has an impact on trade and prices of goods, saying that full reopening and movement of goods will happen gradually.

The head of government business said that despite land borders fully reopening and the government ensuring that movement of goods continues, Covid-19 led to major complications in cross-border movement and trade. 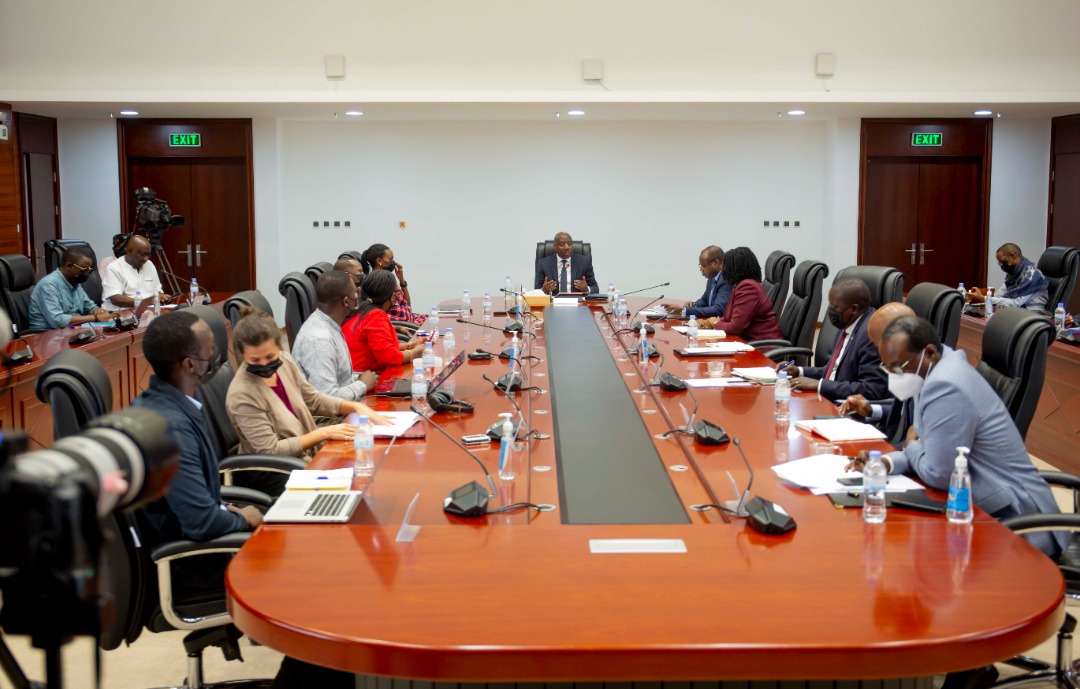 He said that the government is working around the clock to ensure that trade and free movement of goods is not hampered while specific issues relating to trade with neighbouring countries such as Burundi and Uganda, are being worked on bilaterally.

Dr. Ngirente however dispelled reports that Rwanda has banned certain goods from Uganda for example, pointing out that the government remains committed to East African Community (EAC) protocols on free movement of goods.

He pointed out that there are procedures to follow to import or export goods for any country, as instituted by the EAC, which must be followed, denying reports that Rwanda bars affordable goods from neighbouring countries to protect local manufacturing.

“We do not stop any goods from entering our country. In fact, we believe it strengthens our local industries when the market is competitive and people have many choices of quality goods,” the Prime Minister said.

He pointed out that the government will rein in traders who engage in speculation to inflate prices, hiding behind excuses such as the war between Russia and Ukraine. 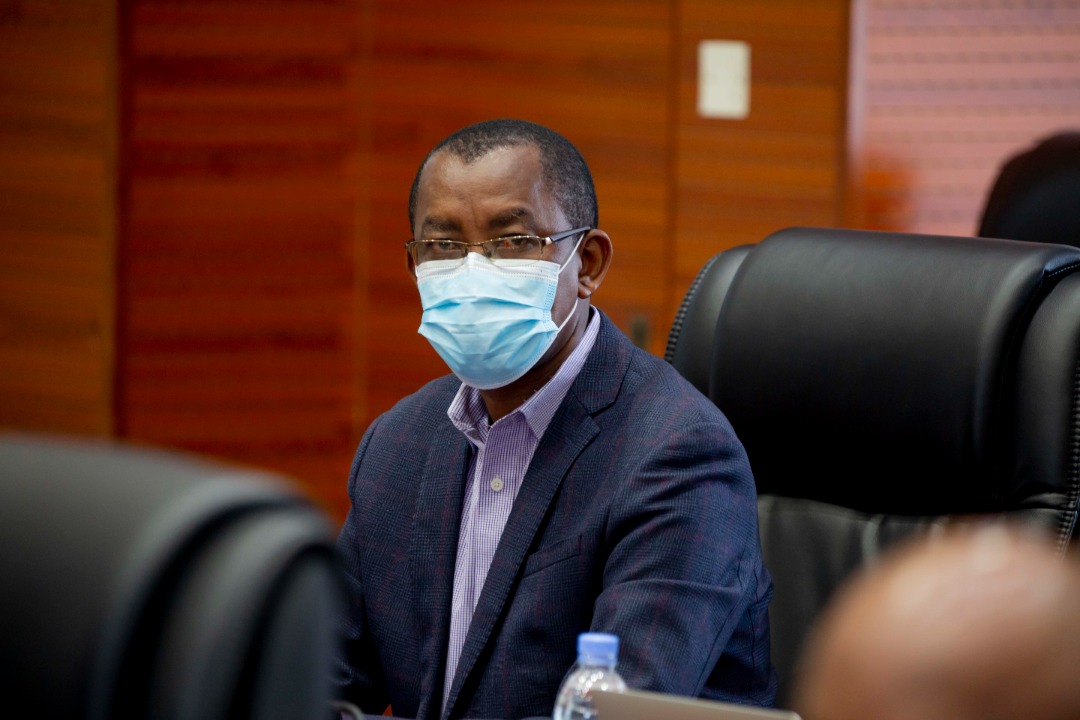 The Commissioner General of Rwanda Revenue Authority (RRA), Bizimana Ruganintwali was in attendance. 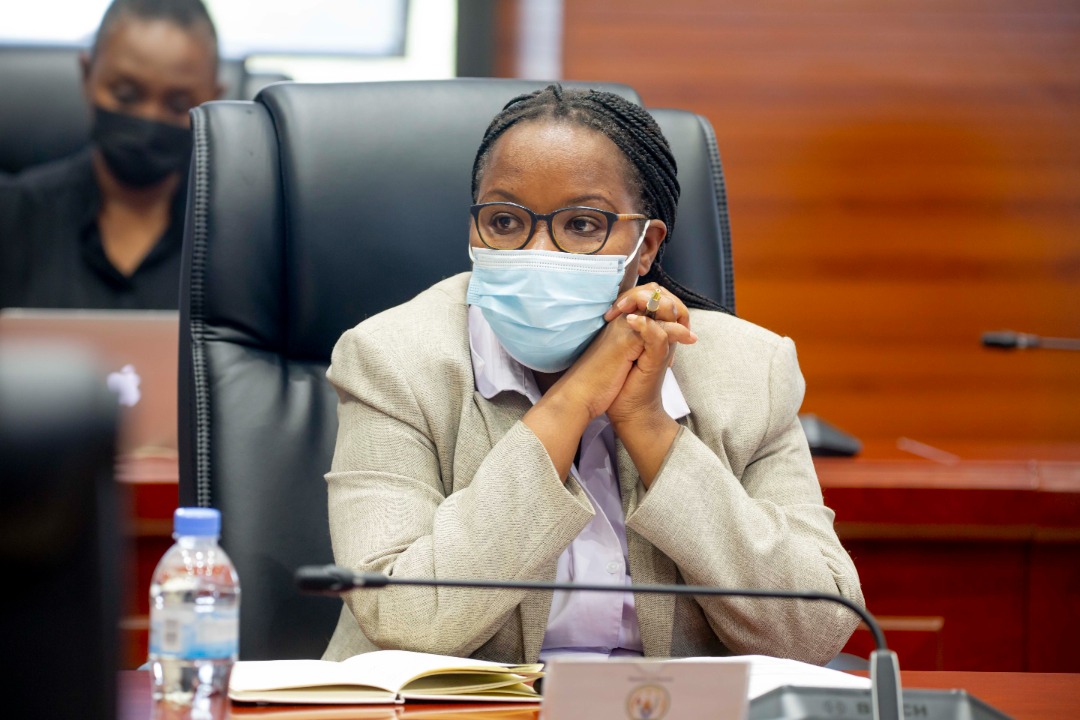 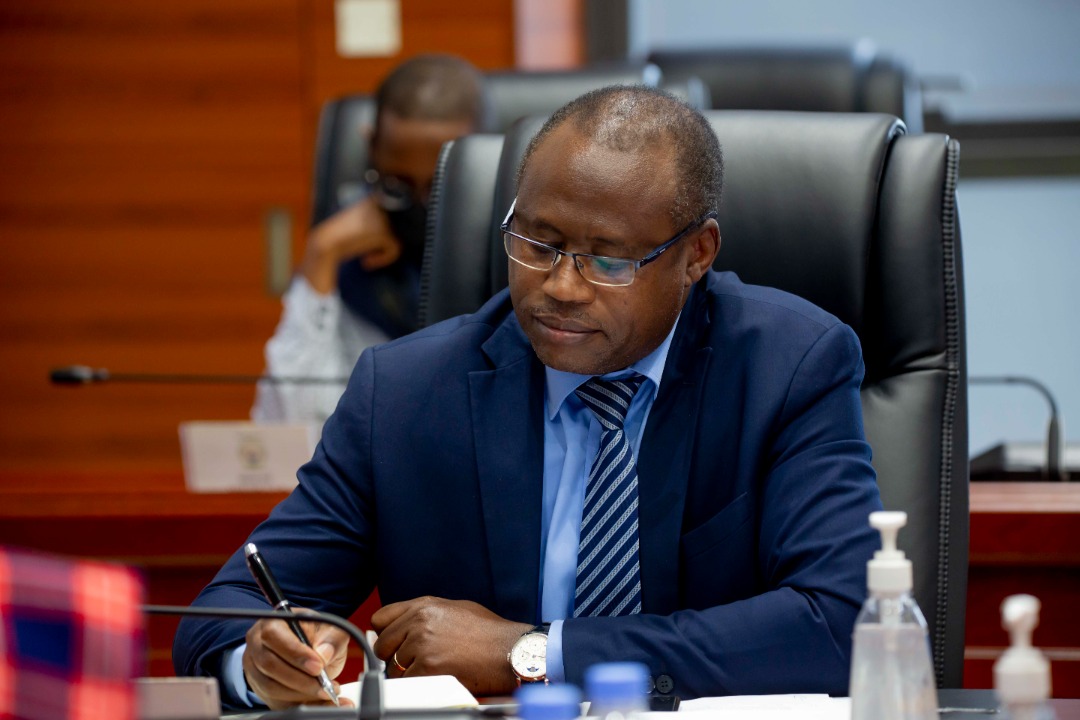 The Minister of Finance and Economic Planning, Dr. Uzziel Ndagijimana. 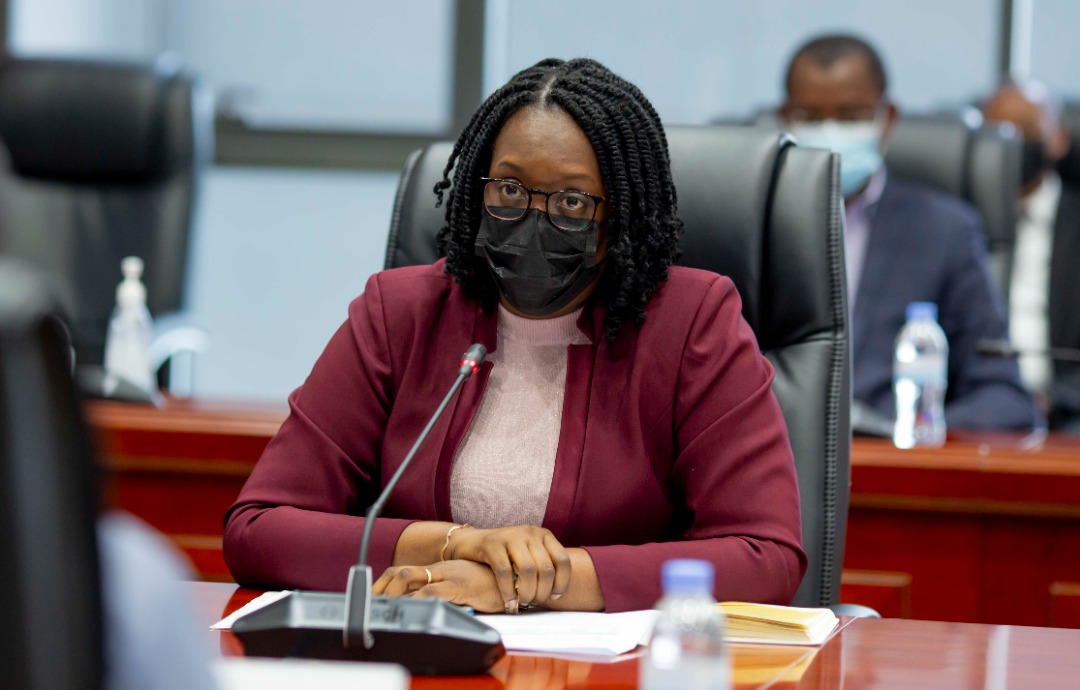 The Minister of Trade and Industry, Beata Habyarimana 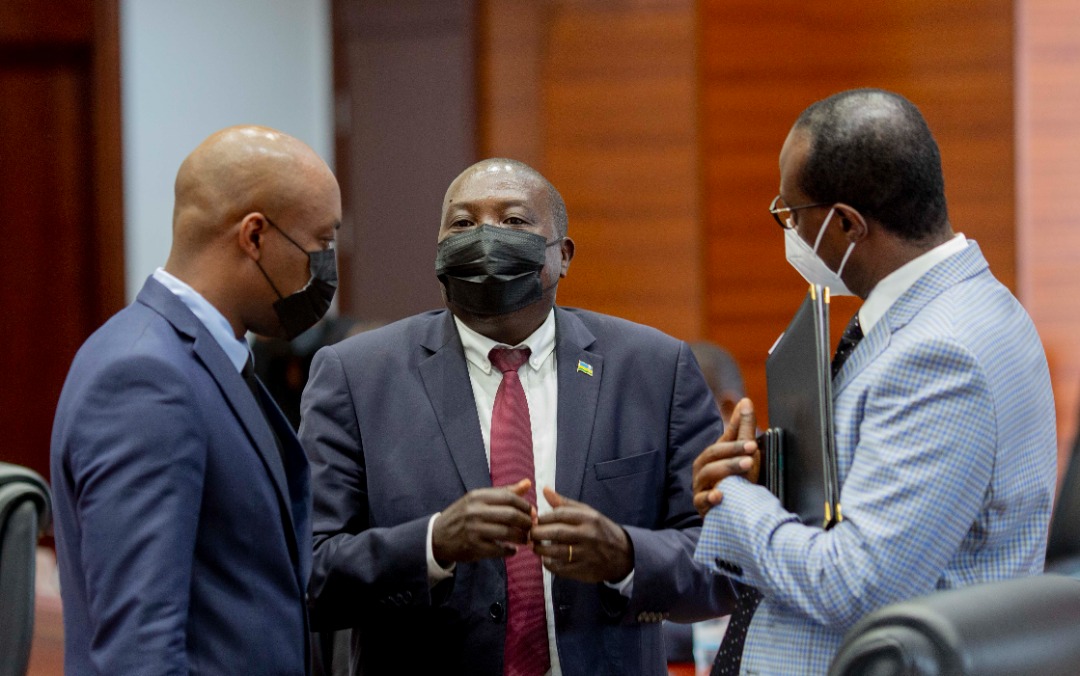 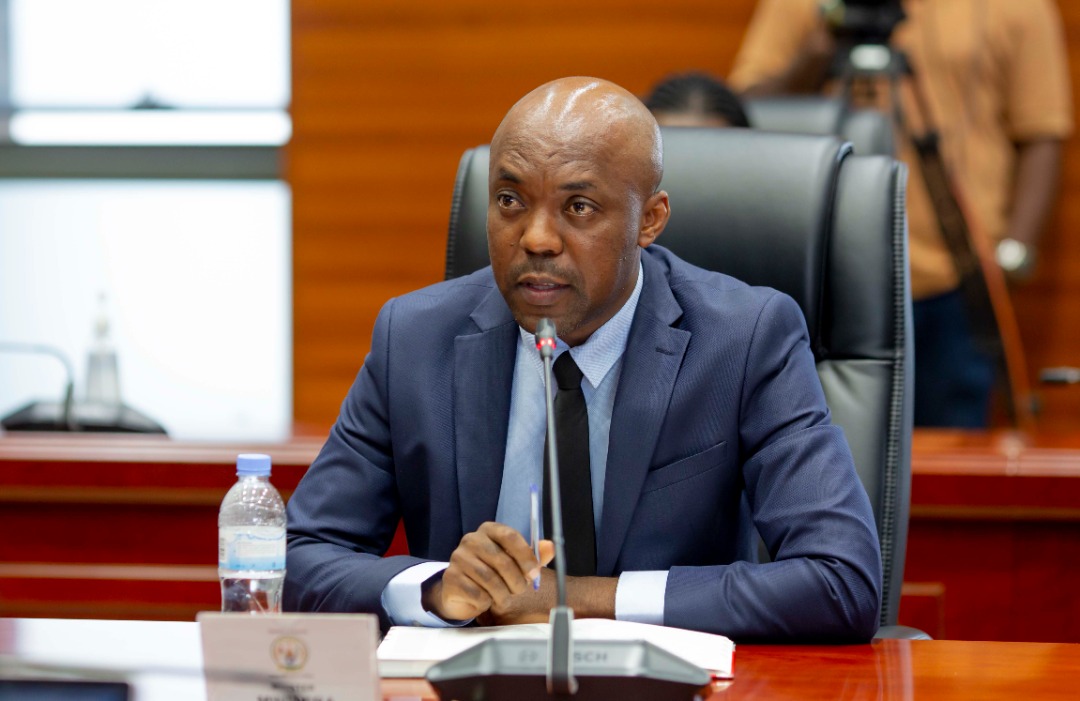 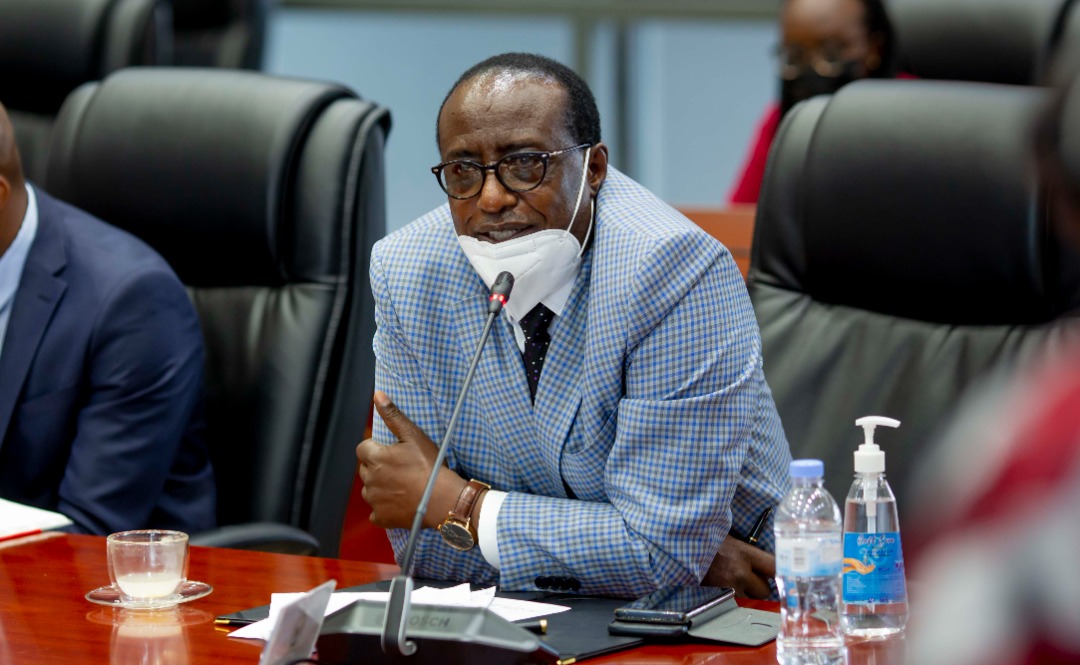 Prof. Nshuti Manasseh, the Minister of State in the Ministry of Foreign Affairs, in charge of the EAC. 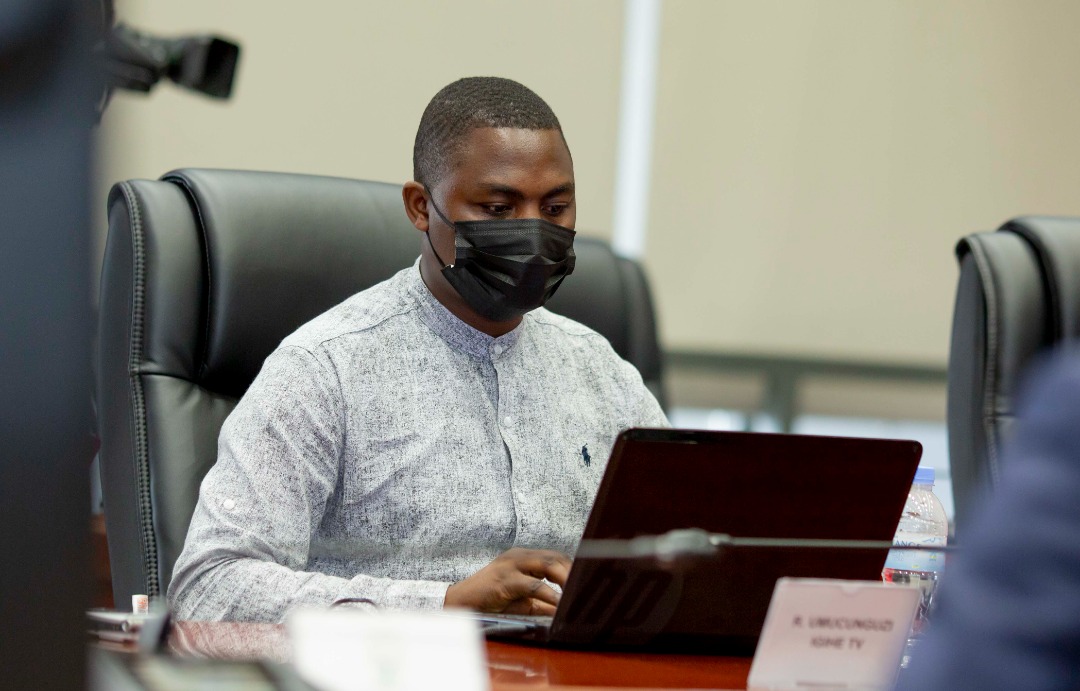 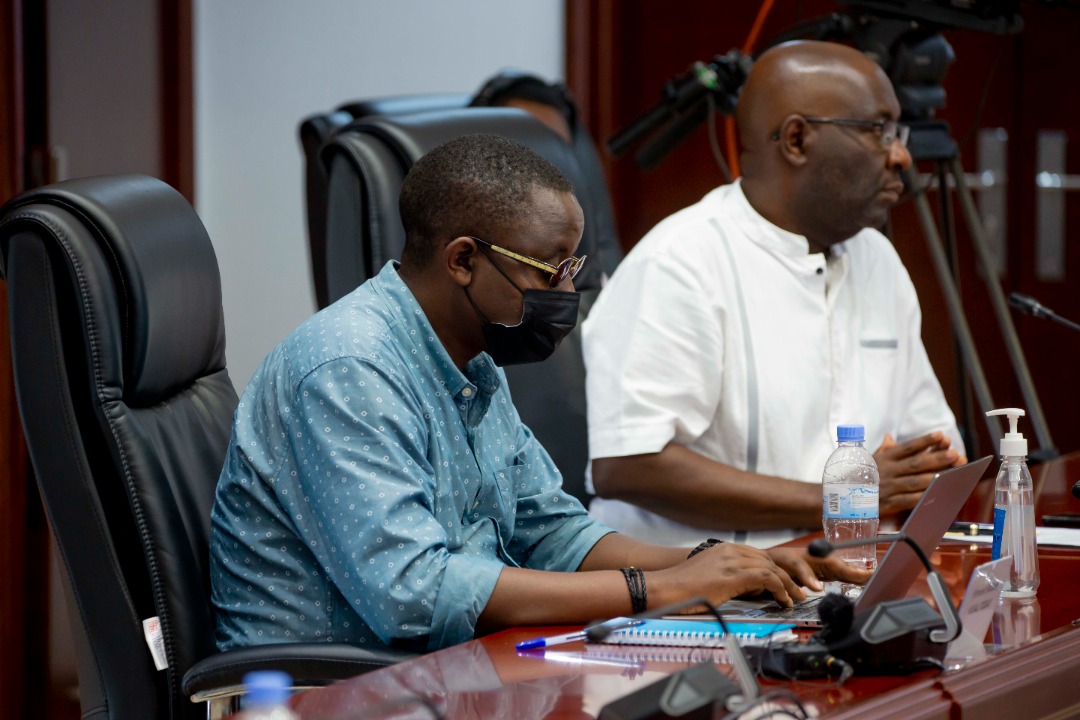 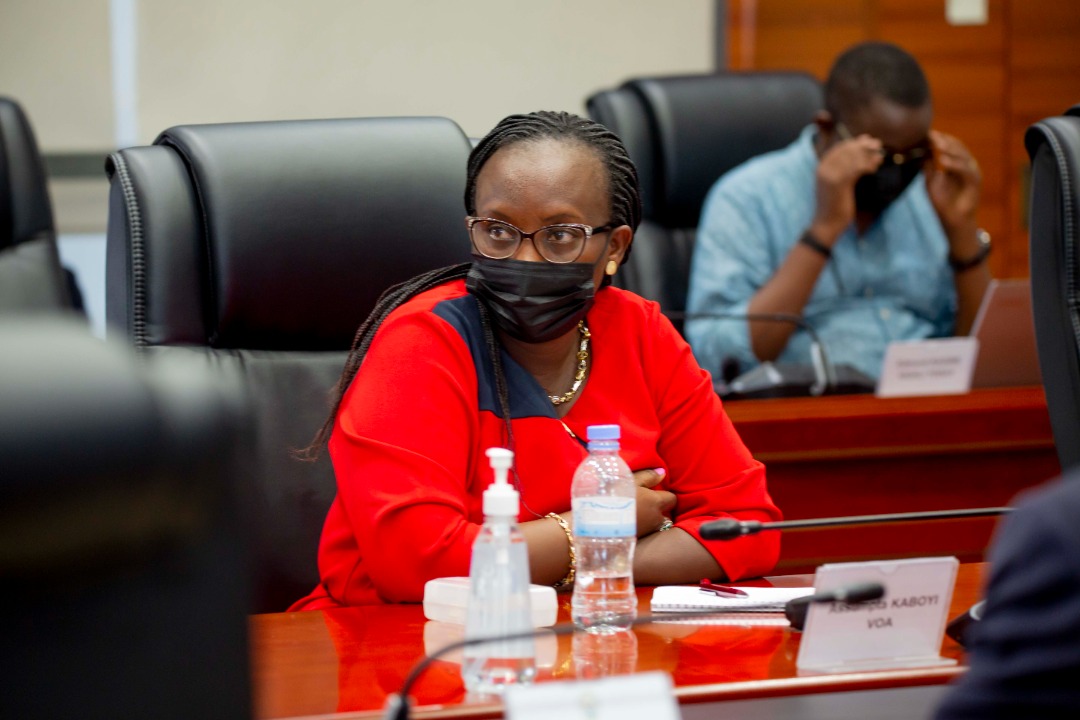 Calling All Creatives, Access Support And Training With Africa In Colours