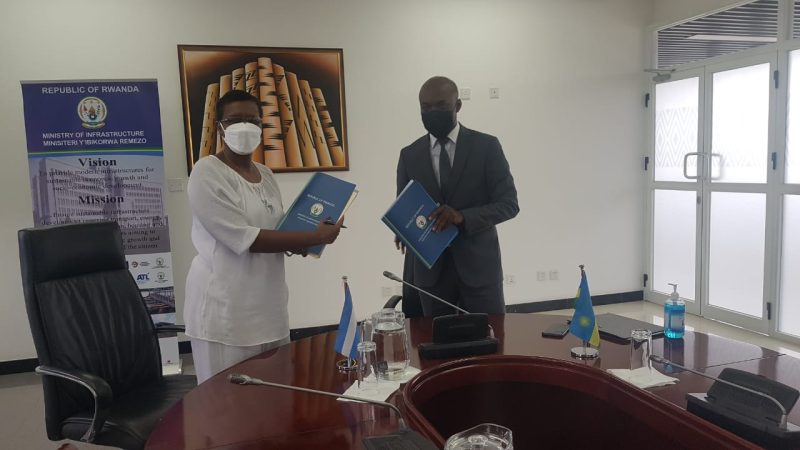 Like opening our respective gates to each other, is how the minister of infrastructure described the agreement, just signed between Rwanda and the Republic of Cuba. A first step in establishing bilateral relations.

The Bilateral Aviation Safety Agreement (BASA), was signed in Kigali, on behalf of Cuba and Rwanda, by Rwanda’s minister of infrastructure, Dr Earnest Nsabimana, and non resident Cuban Ambassador to Rwanda, Tania Perez Xiques, who travelled for the occasion, from her base in the Ugandan capital of Kampala.

The agreement is seen as a beginning to closer air links between Rwanda and both the Caribbean and South America.

“This is an important step in bilateral relations between our two countries,” said Dr Nsabimana, “it starts a people to people connection, bringing our peoples together” who also envisages an exchange of expertise, in areas such as agriculture, and medicine, in which Cuba famously excels.

For Ambassador Perez Xiques, the agreement promises not only a beginning of a bilateral relationship, and all that can be done within it, but also a further link between the Caribbean nation, and Africa as a whole.

“I am very excited about this agreement. It is a very big step between the two countries, a beginning to what our two countries can do together. We now look forward to our future partnership.”

The agreement is especially important for Rwandair’s continued growth, and search for new links and partnerships. The airline’s Chief Executive Officer, Yvonne Makolo, welcomes it as a promising gateway to the Caribbean and South America.

“As an airline, we are of course always looking out for new markets. The BASA agreement gives us a foot in the door into the Caribbean. It is a fantastic opportunity for both countries, to establish further connections for new links. It doesn’t mean that we will be flying to Havana tomorrow, but with the agreement it means the way is clear for us to do so, whenever we are ready to add that route.”

The agreement will also boost the historical links between Cuba and Africa, an opportunity that Ambassador Perez Xiques, particularly welcomes.

“Our bilateral relationship will help us to keep alive the historical relationship between Cuba and Africa, for the new generation, so that it does not disappear. I am especially excited about this, because as Ambassador, it is my responsibility, to bring awareness of Rwanda, in particular, and Africa in general, to the younger generation” she said.

If and when Rwandans and Cubans begin to board Rwandair to each other’s countries, they will need all of Rwandair’s award winning customer care, for a journey of almost 12,000km, 11,904, to be exact.

Cuba comprises the main Island of Cuba, the isle of Juventud, and several small archipelagos. It is the largest island in the Caribbean, and with a population of just over eleven million, the second most populous Caribbean nation, after Haiti.

The country is geographically close to Mexico, the United States of America, its Caribbean neighbours, and a number of South American countries.