On eve of the 1994 Genocides against Tutsi, ‘Dr. Odette Nyiramirimo’s family did a small gesture in the life of someone which has become the starting point of their remembrance story.

A man living with disability, his name Dusabe had come to see them in the morning when he said: “Doctor! I have seen a beautiful TV screen on sale from Germany Embassy. You know I don’t have a television please give me Rwf 50,000 top up so I can buy it.”

Nyiramirimo’s husband signed him a cheque of the exact amount he had requested. The receiver returned home with pleasure.

That evening of April 6, 1994, in a sign of gratitude, Dusabe who had a car for the disabled drove back to their home in Nyamirambo with the screen.

“We have to inaugurate this asset here,”  Nyiramirimo quotes Dusabe.

Tired they were, they attempted to convince Dusabe that they would see him later for celebration of his “milestone” but he resisted the idea.

“Barely had I served my husband and the guest a glass of wine, our phone rang. I rushed to pick the call and the shocking message was: President Habyarimana has died. When I repeated that loudly, the men who had not yet sipped were short of words,” Nyiramirimo said.

All things stopped and they first of all advised their guest to head home before it was too late as they weighed out which direction to take.

“Let’s head south! No!  Let’s cross to Burundi,” they argued.

The family understood that as they used to do when something was wrong, the Interahamwe would quickly mount roadblocks to arrest and kill the Tutsi.

Despite failure to agree on which stand to take, they at least agreed to pick Nyiramirimo’s sister Venancie Kabageni who was then a Member of Parliament.

Nyiramirimo’s husband picked her quickly and she joined the planning meeting but her stand was too bold.

“I am not going anywhere. I have been working with comrades to bring positive change in Rwanda. All the politicians in our struggle have agreed that we should stay so that we work towards restoration of peace after this incident,” Kabageni who was member of Liberal Party (PL) was quoted as saying after calling some politicians to debate on the way forward.

They failed to decide, and the head of family ruled: “It’s too late now. Interahamwe are everywhere and if we dare go out, they will finish us,” he said.

However, it did not take long for the family to understand that, home or street, no safe haven was available.

“We received several phone calls with children saying: mother and father have been killed, our siblings are gone, goodbye they are killing us,” says Nyiramirimo.

The family jumped into the compound of a nunnery which was next door. In the past killings that targeted the Tutsi in Rwanda, convents, parishes and other places of worship were spared. This had surely made them safe haven.

At the nunnery, there were many Tutsi who shared that same belief.

After three days, the Mother of the nunnery came to register the Tutsi in her compound and they pleaded her not to, after understanding that she was ordered to produce the list for Interahamwe.

Meanwhile, MP Kabageni was put in a special hideout in the poultry because she was most wanted.

In this nunnery of Benebikira, there were also two government soldiers from the Nduga zone, now in southern Province.

They told them that, due to divisionism in the country, they were also as threatened as the Tutsi. They advised: “just give us some money so we can protect you for the time being.”

They agreed that every family would pay them Rwf 50,000 daily. After a couple of days, it became a burden for the families.

“We proposed the soldiers to join us at home to plan how they could escort us up to Butamwa commune so we could cross river Nyabarongo to the south,” Nyiramirimo said.

In the meantime, killings intensified, and they received several bad news of the passing of their friends.

The most shocking was a call from one Ngagi, a businessman from Kiyovu who was saying “My wife has resisted the idea for us to leave when it was still possible, now they are coming for us. See you in heaven beloved!”

Indeed, after a couple of seconds, they heard gunshots before the man hanged up. Shortly after that, a houseboy at Ngagi’s grabbed the same phone and told them:

“Are you the ones who were talking with my boss? It’s over! They have just killed him with wife and children. The whole family is gone!” 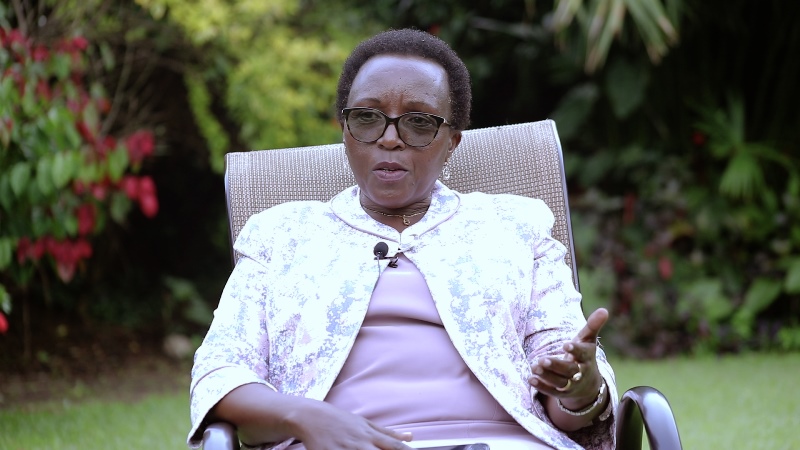 This case is still fresh in the memory of Nyiramirimo. She says it tears rolling in her eyes.

It actually warned her that it was imperative to go, despite all odds.

They agreed to give the two soldiers their Toyota Land Cruiser and $200 cheque just to have them cross to Butamwa, a neighborhood in the city outskirts.

The following morning, April 11, the whole family including MP Kabageni was on board at 5AM as agreed, but they waited for their two escorts in vain. At 6PM, they agreed to go alone at any cost.

The family arrived at Butamwa commune, and at first, it seemed that they were welcome.

MP Kabageni had got her ticket to parliament from Butamwa commune.

“Before parliamentary seat, she had been director of Mount Kigali school in Butamwa and most of communal police officers were her former students. So, she told them our wish to cross to Gitarama where killings had not started yet,” said Nyiramirimo.

“We still gave them money to escort us and once in the valley, we requested the boats from the other side to ferry us. They charged us Rwf 50,000, but after we had collected it, they refused.”

At that moment, the Tutsi who were hiding on Nyabarongo shores were excited to see Kabageni, their MP. They came out of their hiding saying: Happy to see you, where you die, we shall die!

The following arrangement was to try swimming skills, but some of them didn’t know to swim. They fabricated makeshift canoes from banana trees, and once the first person, Nyiramirimo’s hudband entered water, men and women at the opposite side of the river warned: Just dare and we kill you! We already know that all of you guys are Tutsi.

Similarly, Interahamwa started descending Butamwa hill and they surrounded the desperate Tutsi who had become a big crowd on Nyabarongo river.

“They were shooting, throwing grenades, shouting and killing. We run for our safety for the whole day, and in the end, we got exhausted. In that process, they killed Kabageni,” Nyiramirimo said.

“I sat down near her body in despair and told Interahamwe that they were wrong to kill us.”

The bourgmester of Butamwa who was trying to find a way to save the Tutsi sent his two policemen for Nyiramirimo’s family on pretext that he wanted to interrogate them over possession of firearms, “before killing them.”

They removed them from the hands of interahamwe and walked them to the backyard of communal offices where they had parked their car in the morning.

“At that moment, it rained cats and dogs and the burgomaster seized that opportunity to bring us food,” said Nyiramirimo.

“He warned that nearly 500 interahamwe were waiting for us and wanted us only dead. To this, he advised us to escape quickly.”

His bodyguard was angry with this advice, but when he wanted to shoot, the burgomaster ordered him not to.

The family took their car, started the engine and madly drove out of the commune compound.

“Interahamwe followed us with spears, machetes and all crude weapons. We broke 13 roadblocks on our way back to Kigali,” said Nyiramirimo.

Luckily enough, they were able to reach home that night without attracting anyone’s attention.

The nuns told them, that it was announced on radio that they were killed.

“That message brought us some safety. We switched off all lights and stayed inside until the time we were able to reach Hotel des Milles Collines where we stayed from April 27-May 28 when we joined RPF camp,” said Nyiramirimo.

Meanwhile, late Kabageni’s body was retrieved. She was accorded a decent burial on April 7, 1994.