President Paul Kagame has lashed out at ‘big countries’ that want to dictate to Rwandans what they should be, reminding them that they have no lessons to offer to the country for failing to show up when Rwandans were looking up to come to their rescue when they were being killed in their millions 28 years ago.

The Head of State who was speaking at the 28th commemoration of the Genocide against the Tutsi, said that the same countries that level different accusations against Rwanda, including lack of freedom of speech, democracy or justice, have their own shortfalls and should not be the ones dictating what other countries should be.

President Kagame, who spoke after laying the wreath with the First Lady, Mrs. Jeannette Kagame, at Kigali Genocide Memorial, where the remains of over 250, 000 victims of the Genocide against the Tutsi are resting, said that Rwandans know where the genocide ideology came from- theirs was only to execute. He pointed out that it is clear that the claims are aimed at covering up their own responsibility.

“A moment like this is a moment people are Speechless, not because of lacking the freedom to speak as some people would you want to refer to us -a country that has no freedom to speak. That’s rubbish. It doesn’t make sense, but the reason is also clear,”

“Just imagine the testimonial we have just heard, people being hunted down day and night for who they were, for who some of them are still today. Also imagine if those of us who were carrying arms had allowed ourselves to pursue those who were killing our people indiscriminately and also killed them? First of all, we would be right to do so but we didn’t. We spared them,” President Kagame said.

He said that some of the people who killed during the Genocide or benefited from it are still living today, in their homes, in their villages while others are in the government or are doing the business.

“We didn’t do that and yet people will have guts to say what they say about us or do against us what they still do, up to now. But let me tell you, we are a small country but we are big on a Justice. Some of those are big and powerful countries but they are very small on Justice. They have no lessons to teach anyone, because they are part of this history that saw over a million of our people perish. They are the cause,” President Kagame said. 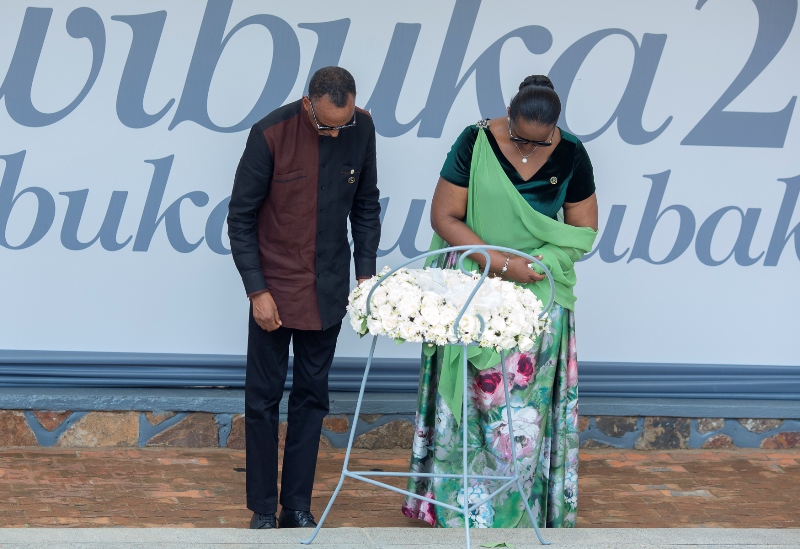 He said that Rwandans just executed or killed their fellow Rwandans but the history of that originated from elsewhere. He pointed out that it is the reason the same people who sowed the seeds of hate cannot give Rwanda peace.

“We are not the same. That’s why we did not kill another 1 million on top of the one we lost on the hands of these criminals. Some of whom are really protected, even now, by the very countries that talk about justice, give lessons about justice,” he said.