The UK Home Secretary, Priti Patel, and Rwanda’s Minister of Foreign Affairs and Cooperation, Dr. Vincent Biruta have fired back at the critics of the Rwanda-UK Migration and Economic Development Partnership”, asking them to offer solutions.

In an OpEd first published by The Times UK, Dr. Biruta and Patel argued that no humanitarian nation can allow the deadly trafficking of refugees and asylum seekers, asking those criticizing the partnership to come up with alternatives.

The two officials reiterated their position that the new partnership which was announced in Kigali last Friday offers a new innovative solution to the global immigration crisis since all the other solutions applied have failed.

“The global asylum system is broken. Around the world, it is collapsing under the strain of real humanitarian crises, and because people traffickers exploit the current system for their own gain,”

“These criminals play on the hopes of economic migrants, pushing them to make dangerous journeys because they can claim asylum if they make it,” Patel and Biruta argued,” in response to the criticism the deal has received.

The two Ministers further said that the breakdown has had devastating consequences for the countless men, women and children who have lost their lives or lost loved ones on the perilous journeys abroad.

“The existence of these parallel routes is also deeply unfair as it advantages those with the means to pay traffickers over vulnerable people who cannot. This can’t go on. We need innovative solutions to put a stop to this deadly trade,”

“The UK and Rwanda are determined to work together to tackle this pressing issue. The human costs are simply too high,” the two officials wrote.

“We must make the system fairer, by ensuring those in need of protection are able to find safety, while also addressing the imbalance of human capital and opportunity which drive economic migration,” they added.

Dr. Biruta and Patel said that through the partnership they will provide legal, safe, orderly and controlled ways for people to better their lives, flee oppression, persecution or conflict and enjoy new opportunities.

They further argued that the ground-breaking long-term partnership will set a new international standard because it tackles the urgent global issue of migration at its roots, by addressing the human capital imbalances which together with conflict and instability drive the global migration crisis.

“Through investment in jobs, skills, and opportunities in Africa, this bold new approach hopes to set a precedent that could be replicated elsewhere,”

“It will disrupt the business model of organised crime gangs and deter migrants from putting their lives at risk,” the officials write. 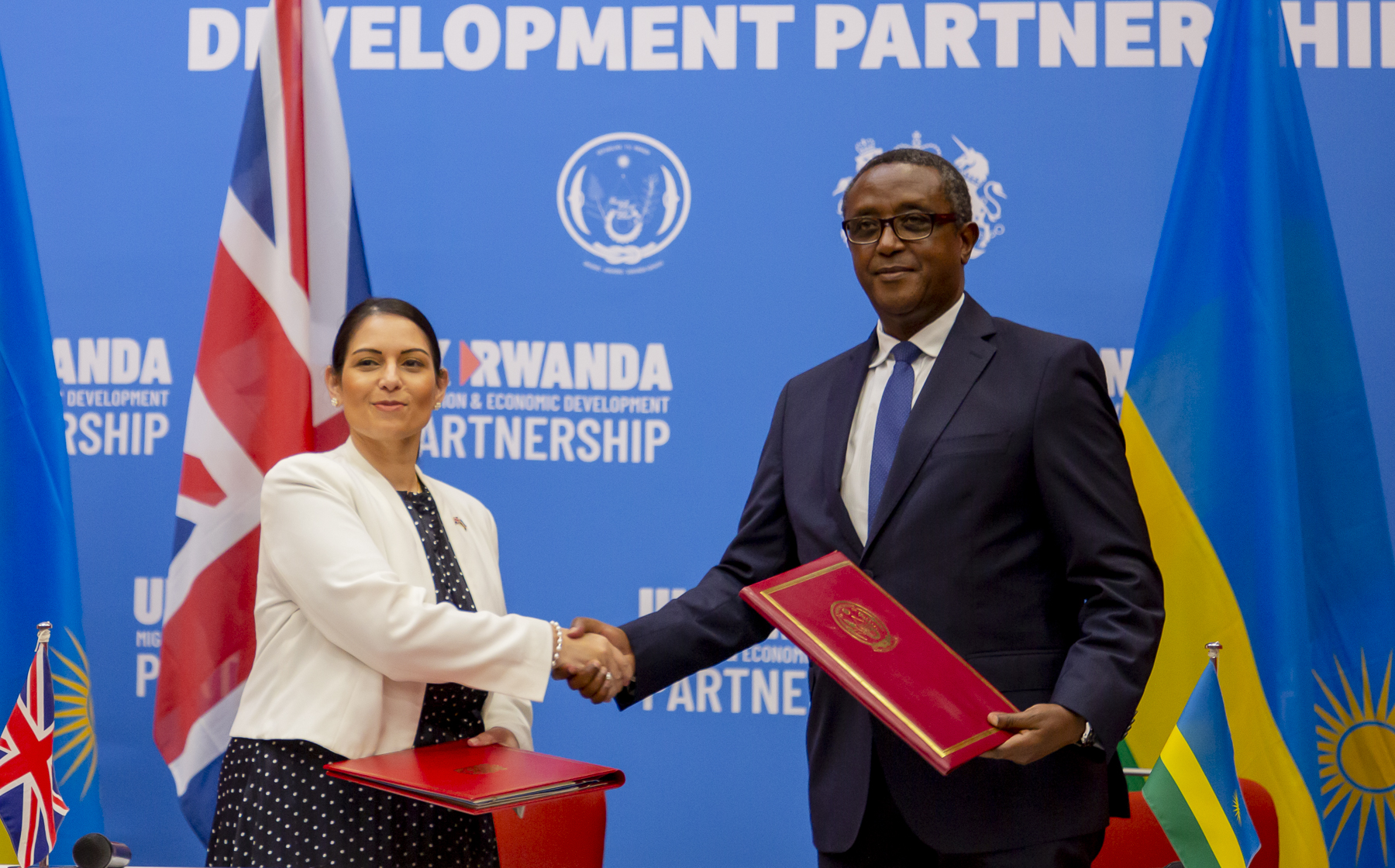 Dr. Biruta and Patel reiterated what they said at the press conference in Kigali that the partnership will ensure that asylum seekers who are in genuine need of protection will be safe and secure in Rwanda, the host country recognised globally for its record on welcoming and integrating migrants.

The two officials emphasised that Rwanda’s recent history has a deep connection to the plight of those seeking safety and opportunity in a new land, which has shaped the country’s approach to migration and asylum issues.

“Rwanda has a strong record of providing safety to those fleeing danger and in multiple global indexes, and consistently ranks as one of the world’s safest countries,”

“It already provides refuge for almost 130,000 refugees from multiple countries. In 2019 at the request of the UNHCR, Rwanda offered sanctuary to endangered migrants evacuated from Libya. This record proves the its commitment to protecting vulnerable people around the world,” the OpEd reads.

They further said that UK and Rwanda stand together in their efforts towards promoting a new, fairer and more effective global asylum system, which deters criminality, exploitation and abuse.

They added that the model will instead aim to support the humane and respectful treatment of refugees, provide human capital opportunities for migrants and the host community and offer safe and legal pathways for those fleeing persecution and insecurity.

“Illegal migration is a global issue and we are jointly leading in setting a viable plan to deal with one of the most complex challenges facing the world today,”

“We are taking bold and innovative steps and it’s surprising that those institutions that criticise the plans, fail to offer their own solutions. Successfully implementing this ambitious partnership will require concerted effort.”

Patel and Dr. Biruta said that allowing the suffering to continue is no longer an option for any humanitarian nation.