A delegation of Genocide survivors from Rwanda on 9th April 2022 joined officials from the Rwandan Embassy in Uganda, association of Rwandese living in Uganda, and different diginitaries working in Uganda in commemoration and remembering over 10,000 Genocide victims who were retrieved from rivers.

The victims were accorded decent burial in dignity in Mpigi district – Masaka along the shores of Lake Victoria.

The head of department of Regional Peace and Security in the Ministry of Foreign Affairs in Uganda Amb Julius Kivuna who officiated at the function said 28th commemoration invites people to always remember and never forget those who were killed in 1994 Genocide against Tutsi and live in unity and humanity.

“ We should also take time and remember the victorious former Rwandese Patriotic Army(RPA) Inkotanyi who took arms and moved in to stop the Genocide against the Tutsi,’’ said  Amb Kivuna head of regional peace and Security.

Amb Joseph Rutabana the High Commissioner of Rwanda to Uganda said that during the Genocide, killers did not mind the period of time it was.

“On 7th of April 1994, while Christians across the world were cerebrating Easter festivities, our country was going through one of her darkest times in history,” he said.

“A well-planned genocide against one portion of our population, was being executed, Tutsis were being hunted, hacked by machetes, their heads crushed by clubs, thrown into rivers and lakes, and those who were “lucky” were allowed to be shot. Being shot had become a “luxury”.

UN blamed to have looked on

In his speech, Amb Rutabana said Within 100 days, the perpetrators exterminated over a million innocent children, women, young people and elderly for the sole reason that they were called Tutsi.

Unfortunately, the International Community was passively watching. Instead of quickly intervening and save lives of innocent human beings, in some circles, debates were taking shape to determine whether what was happening in Rwanda was genocide.

While commenting on the tragedy of those who were thrown in water bodies,  he said  some of the rivers where they were thrown happen to be the tributaries of Lake Victoria-rivers Nyabarongo and Akagera.

“Thousands of bodies were carried by these rivers upstream into Lake Victoria. These were unprecedented and terrifying scenes for the people living here on the shores of Lake Victoria,” Rutabana said.

“I take this opportunity to thank the Government and the people of Uganda for showing the sense of humanity, empathy and solidarity by getting out all those human bodies from the water and accord them decent burial here and in other two sites.’’ 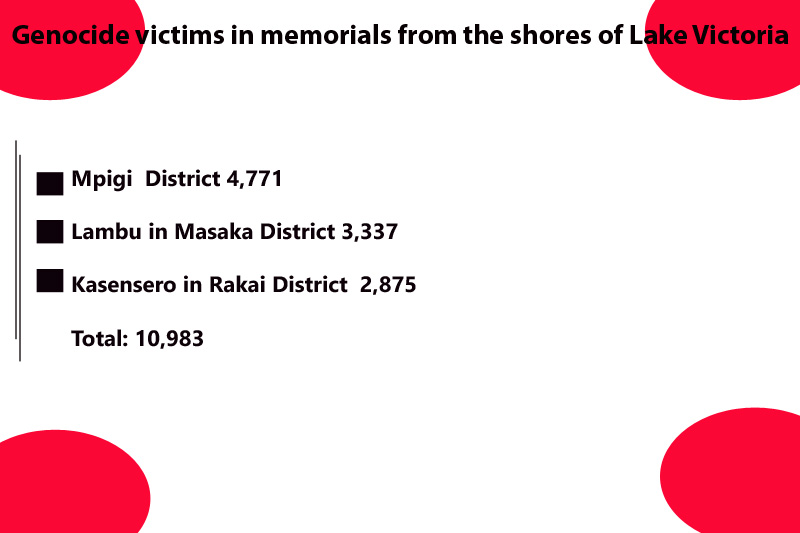 The High Commissioner to Uganda  said the people of Rwanda recognize and appreciate this noble act of according a decent burial to innocent victims from Rwanda.

“We are now able to come and commemorate the genocide here, where thousands of victims lay to rest. Today, the High Commission is happy to share this 28th Commemoration with members of HUMURA, which is an Association of Genocide survivors, who came from Rwanda,” he said.

“We console you, as direct victims, although we must therefore collectively denounce the Genocide and bring the perpetrators to justice wherever they reside across the globe. The Government of Rwanda will keep requesting that all countries adopt laws punishing the crime of Genocide and its denial.”

Indeed, the United Nations Security Council resolution 2150 (2014) of 16 April 2014 stipulates the prevention and fight against Genocide and other serious crimes under International Law.

The Vice president of Humura Victoria Warakoze  Nubumwe JBosco who led a delegation from Rwanda also thanked the Ugandan Government  with particural emphasis to the head of Four Ways Group Company Mohammed Thoban, who took the initiative of organising and constructing a memorial site in Uganda.