When the Genocide against the Tutsi began in April 1994, Angélique Uwamahoro was a toddler. She was the firstborn in her family and lived with her grandparents, uncles, and cousins in Shyorongi, Rulindo District, Northern Province.

On the massacre day which Uwamahoro does not recall well, killers stormed her grandfather’s home, gathered all of her family members and other Tutsi neighbors in the kraal and started killing them using machetes.

Uwamahoro was equally hit and she fell down and blood covered her.

After the killers had gone a man that Uwamahoro did not manage to identify came to check if there could be any survivors.

The man picked her with another child and took them to a relatively save haven.

“The man took us to his house and changed our clothes and told us not to fear because he wanted to save us, not kill us,” Uwamahoro recalls.

“He took us to another home and told a woman to hide us. The woman hid us under the bed for a period of time. The family that hid us also started moving to seek refuge, and we went with them. The woman lifted me on her back and pulled a hand of my colleague. We spent many days moving and sleeping on the roadside until we reached Zaire (Democratic Republic of Congo/DRC).”

According to Uwamahoro, it was unfortunate, that after many months they lived in DRC, the woman died.

“We lived together in DRC. Unfortunately, she died before returning to Rwanda. She would have brought me back and perhaps reunite me with my biological family,” Uwamahoro said.

“After her death, I got another guardian, still a woman. She told me to live with her. She took care of me. She told me to tell people that she was my mother. We lived together until we returned to Rwanda and settled in Rubavu district.” 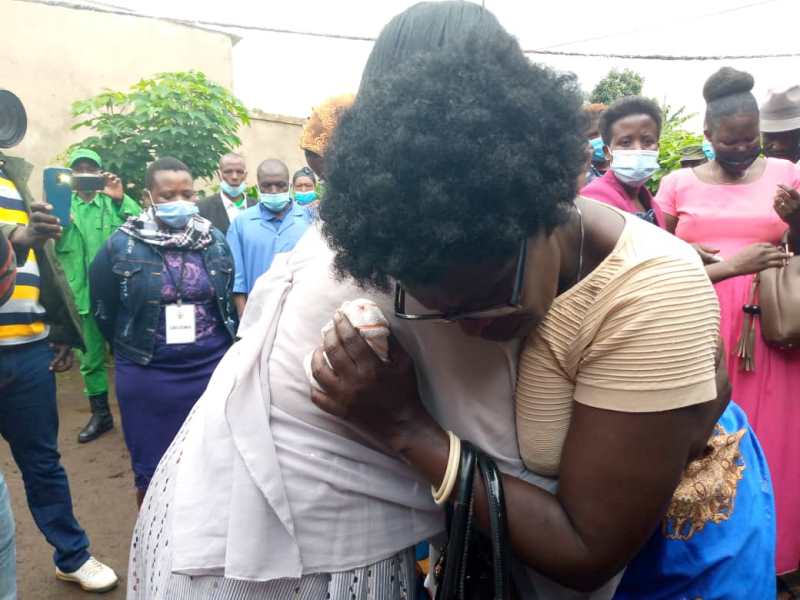 Several days later, another woman in the neighborhood promised to help Uwamahoro find her biological family, if only she accepts to join her.

“Our neighbor kept asking me whether the woman I lived with was my mother. I replied Yes several times as I was directed. But one day, I revealed to the neighbor that she wasn’t. She told me to shift and live with her and promised  to find my biological parents,” she narrated.

According to Uwamahoro, she accepted to live with the neighbor who eventually took her to a relative named Jacqueline Mukagatana.

“Someone brought me a child to be her guardian; I went in the bedroom and prayed to say; lord I am not a biological parent of this child, but give me the heart of loving her as my own child. I accepted to be her parent, put her in school  until she graduated,” Mukagatana said.

Today, it was tears of joy to Uwamahoro and almost the crowd that gathered to see the miraculous reunion after 28 years of separation.

Uwamahoro, the 33-year-old now reunited with her father, mother, and seven siblings who live in Nyagatare district, Eastern Province.

“I gave the information to media; saying my parents lived in Mugambazi. It’s what I remembered. I described everything I could remember, during the Genocide against the Tutsi in 1994; A man who got me from the dead bodies and the Journey to Zaire and back to Rwanda. I used media to search for parents just to try. I didn’t have hope, but it has now become a reality,” Uwamahoro said.

“After several days of searching, someone called me saying that they have finally got my family. But I didn’t believe what she told me until today when I saw them.”

Uwamahoro is now mother of two.

After the reunion, Epimaque Muganwa, the father of Uwamahoro said that he thought Uwamahoro died with the rest of the family members.

“She is my daughter. This is the scar I put on her when she was sick. During the Genocide, she lived with his grandfather. This is a miracle that I have never seen,” Muganwa said.

Liberata Mukamulisa, the mother of Uwamahoro said that she dreamed about her daughter frequently and she has finally seen her.

“She is my daughter. I thank God for reuniting me with my daughter,” she said.

To reunite the family, Uwamahoro’s parents were accompanied by Rulindo district officials.