Rwanda has the right and capacity to respond if it continues to be provoked by the Democratic Republic of Congo (DRC), the country’s Minister of Foreign Affairs and Cooperation, Dr. Vincent Biruta said on Tuesday during a media briefing on the situation between Rwanda and DRC which has escalated over the past two weeks or so.

Dr. Biruta, who addressed the press after a meeting with diplomatic corps to brief them on the tensions between Rwanda and DRC, said that the neighbour to the west, particularly the government forces, FARDC, have been engaged in acts of provocation, including shelling the Rwanda territory and kidnapping two Rwanda Defence Force (RDF) soldiers on patrol but Kigali has refused to be drawn into the conflict.

The Minister said that currently Rwanda has no soldiers on Congolese soil, and if it was to do so, it wouldn’t send two junior officers to face the national army. He said that while Rwanda is not interested in war, it wouldn’t sit back and watch while being provoked.

“There is no presence of  Rwandan soldiers in DRC. Rwanda cannot attack a country and confront the national army with just two junior soldiers,” Dr. Biruta said, emphasizing that there is no collaboration with anyone, where it is M23 or the Ugandan forces operating in DRC. 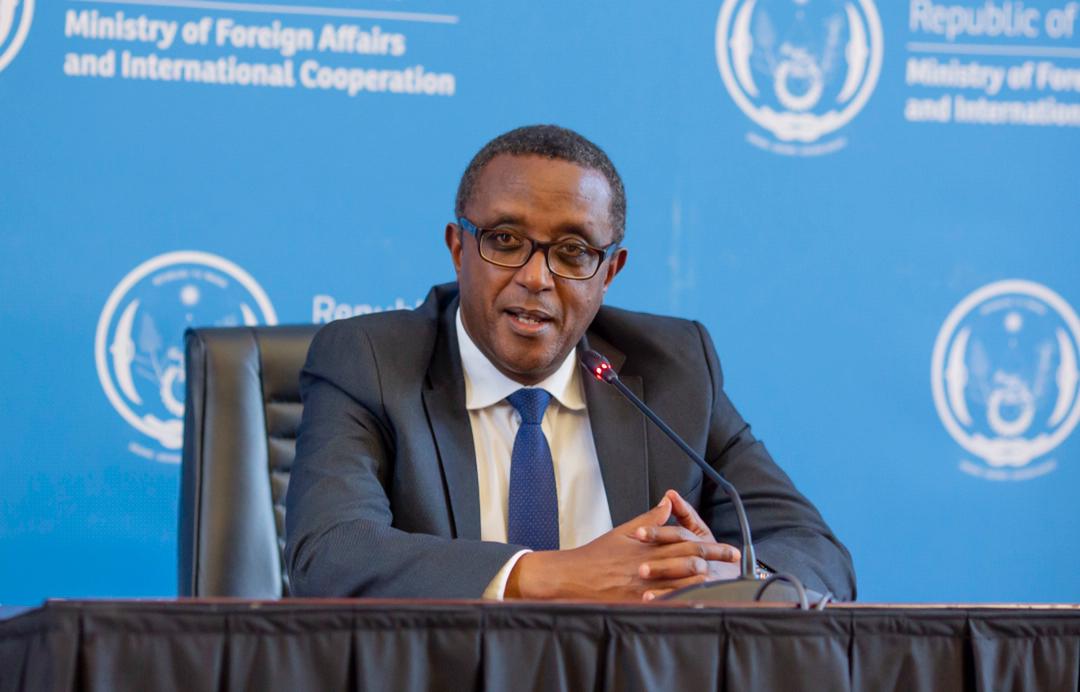 Dr. Biruta said that he discussed situation, including provocations, with the diplomatic corps and informed them them that Rwanda would not sit back amid continued actions of provocations.

“I wanted to discuss the matter with them and ask them what they would do if their countries were in such a situation. How would they handle it?” Minister Biruta said, giving a background of where it all started, dating back to 1994, when genocidal forces fled into the vast African nation and formed armed groups which continue to terrorise the region.

“Last week on 23rd May, the FARDC, working alongside the FDLR in their ranks, fired shells  across the border, into the Districts of Musanze and Burera. The attack resulted in several serious injuries and damaged property. This was the second shelling this year, following a similar attack on 19th March 2022,”

“These incidents have since been confirmed by the Expanded Joint Verification Mechanism of the ICGLR. Two soldiers of the Rwanda Defence Force, who were on patrol along our border, were kidnapped by elements of the FDLR and are now being detained by DRC authorities,” he said, adding that Rwanda has requested for their protection and immediate release. 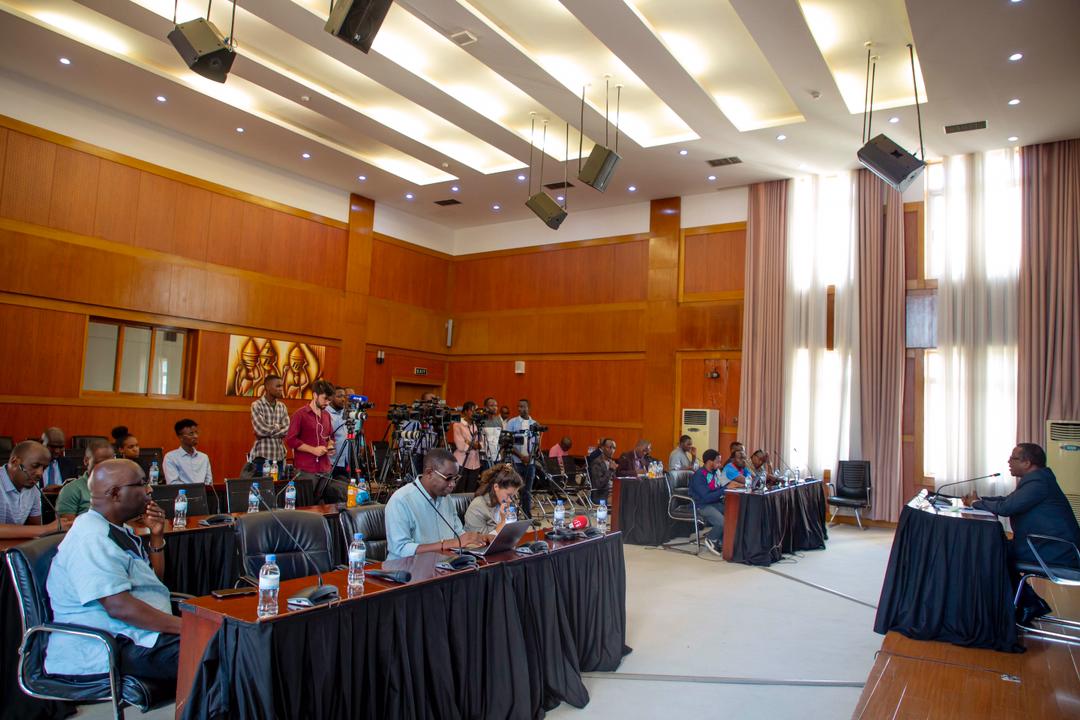 Dr Biruta, reiterated that DRC forces are fighting with elements of the Democratic Forces for the Liberation Rwanda (FDLR), a terror outfit formed by elements who fled into DRC after the 1994 Genocide against the Tutsi, adding that the UN Peacekeeping force in DRC, MONUSCO, cannot claim to be unaware of the collaboration between FARDC-FDLR since they are on the ground with them.

“During the interrogation, which happened in questionable conditions, by the FARDC of the two kidnapped RDF soldiers, MONUSCO was present. It is critical that MONUSCO act responsibly, and implement their mandate which includes fighting all armed groups,”

“What we are seeing today, are the consequences of unresolved problems that have existed in the DRC since well before 1994. For the last 28 years, there has been a proliferation in Eastern DRC of armed groups in general, dominated by the FDLR in particular, with all its various splinter groups,” he said.

Minister Biruta said that the president of FDLR in DRC remains a thorn in the flesh of the two countries as both the UN and DRC government have failed to act decisively against the group which continues to sow the genocide ideology. 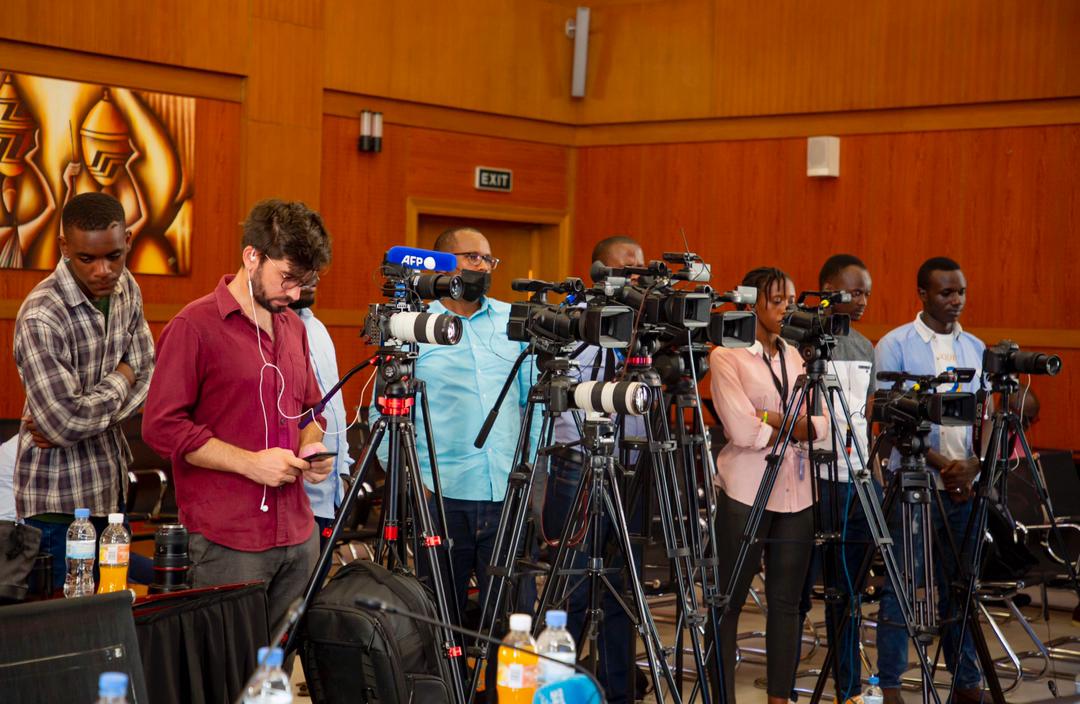 “This is a well-known fact to all, including MONUSCO that has been operating in the area since 1999. The presence of the FDLR has caused untold suffering to the people of Eastern DRC, and perpetuated insecurity in our region for close to three decades now,”

“Over the years, the International Community continues to ignore the failure to implement the many measures and agreements that the DRC has signed up to, aimed at restoring security and stability in the country and the wider region.

Dr. Biruta explained that since 2013, following the defeat of the M23 by the Force Intervention Brigade (FIB), a number of combatants fled to Rwanda and Uganda. He pointed out that those that entered Rwanda were disarmed and cantoned far away from the DRC border, which is where they remain, as agreed by the regional mechanism at the time.

He added that Rwanda has also made efforts to facilitate various engagements between these Congolese ex-M23 combatants and their Government, which culminated in an agreement and repatriation roadmap in 2019.

“As part of this process, the arms and equipment that the Government of Rwanda seized from this group were handed over to the Government of the DRC. There has been a lack of commitment or interest on the part of the DRC to implement the existing roadmap,” Dr. Biruta said, expressing frustration in how the DRC government handled the matter. 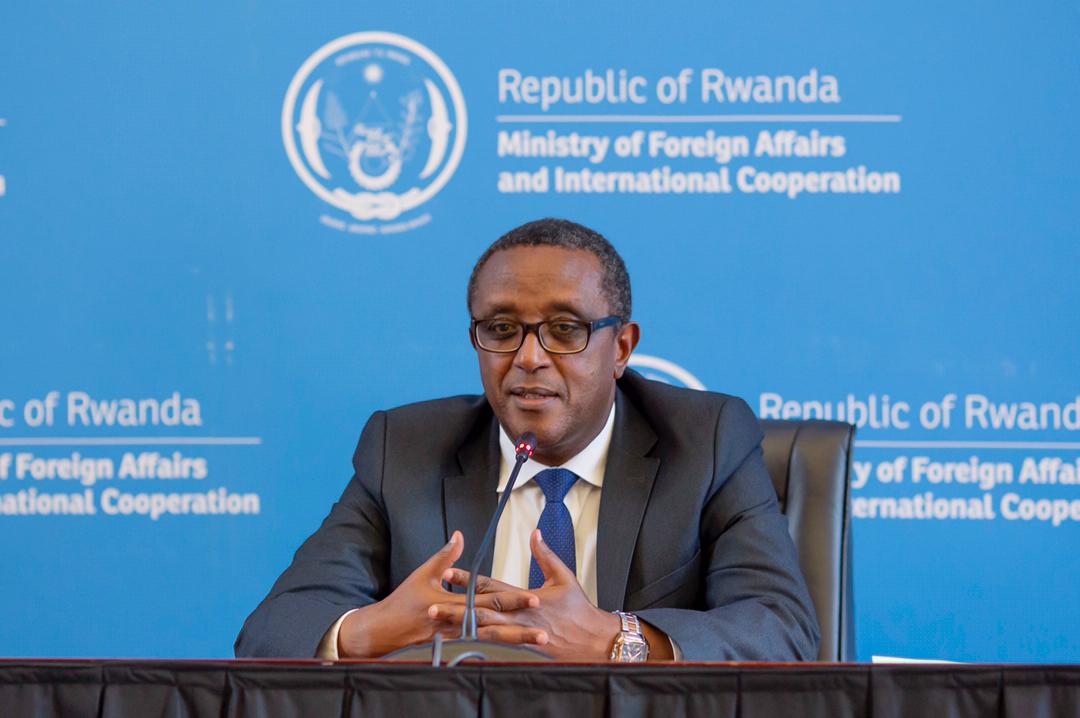 “It has been more than nine years, since the signing in Addis Ababa, of the Peace, Security and Cooperation Framework for the DRC and the region, which generated hope for ending all armed groups, and there are more than one hundred of them, which carry out regular massacres all over Eastern Congo that are routinely met with silence and indifference,” Minister Biruta said.

He said that Rwanda hoped that the accords would be the beginning of inclusive political dialogue, and the strengthening of security and economic cooperation but the problems have since persisted.

Dr. Biruta pointed out that the the more recent Nairobi Process, led by President Uhuru Kenyatta and President Felix Tshisekedi also brought renewed hope for stability in the region, through the framework of the expanded East African Community (EAC) but it did not yield results as parties could not agree on different issues, including demands from some of the armed groups.

Minister Biruta said that Rwanda is concerned with the hate speech targeting Rwanda on the Congolese side and the DRC government has not acted to stop the negative and dangerous ideology being peddled by politicians, armed forces and citizens, including on social media.

“A disturbing factor that should be of global concern, beyond this region is the blatant resurgence of anti-Rwanda hate speech and calls for Genocide, that are being encouraged by some officials and politicians in the DRC, and spreading through the population,”

“Genocide ideology has not stopped spreading since 1994. It seems to have become normal, as if everyone has to accept it as a fact, that one community must be eliminated. Negative propaganda is rising. We have seen this before. In the calls to hunt down Rwandans and destroy Rwandan businesses, no one can fail to see the seeds of Genocide emerging,” the Minister said.

“This is being met with silence from the International Community. Videos and other material are circulating on social media. Why is there silence on this issue?,” Dr. Biruta said, adding that not even the the United Nations Special Adviser to the Secretary-General on the Prevention of
Genocide has commented on the matter.

“Tomorrow, are we going to say again that we didn’t know? Rwanda is not interested in a crisis. Rwanda is committed to peace, stability and economic
development of our region and wishes to continue working with the DRC bilaterally, and through the established regional initiatives,” he said, adding however that the country will not sit back if the provocations continue. 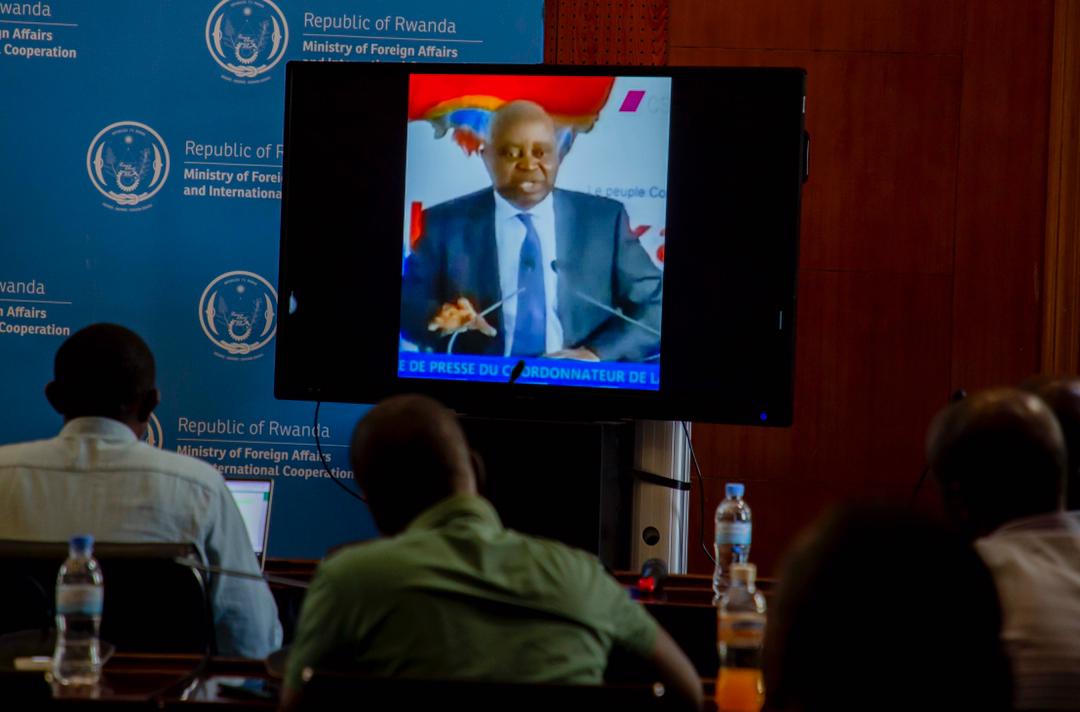 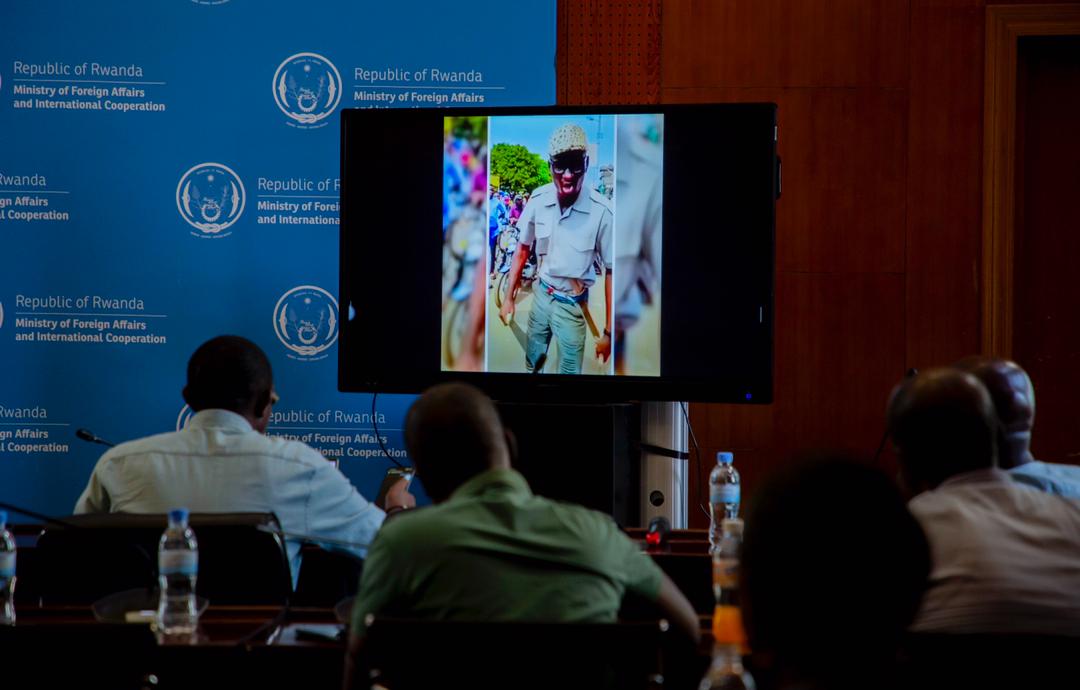 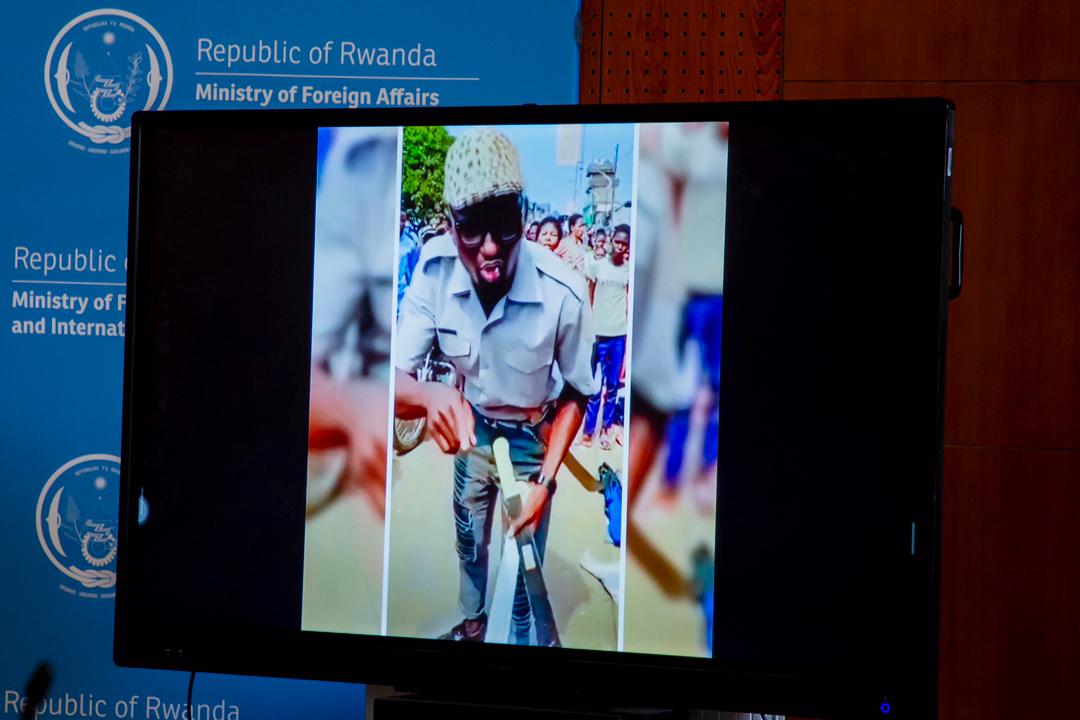 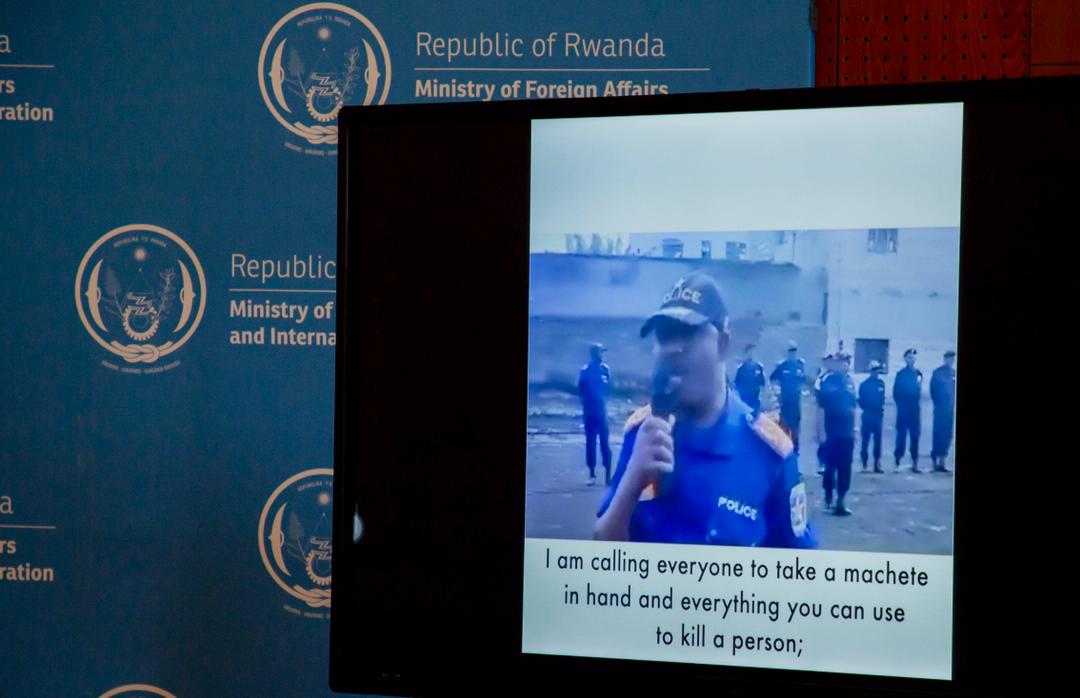