Research indicates that 95% of the residents in Kigali use pit latrines, a system which consumes an already scarce land in the capital Kigali.

That economic aspect of land also goes with an environmental impact; it is feared that this latrine system somehow connects to Rwanda’s longest river Nyabarongo (351 km long), a tributary of Lake Victoria.

The later is a big asset, not only to the region, but also to the continent and the world at large.

In effort to save the lake while also saving environment from the source, today Water and Sanitation Corporation (WASAC) and Lake Victoria Basin Commission (LVBC) have signed an agreement to construct a local liquid waste treatment plant to reduce polluting water bodies that are tributaries to Lake Victoria.

LVBC is an institution of the East African Community (EAC) developed from the EAC’s Lake Victoria Development Program that aims at preventing further pollution of the Lake Victoria’s tributaries from neighboring countries including Kenya, Uganda, Tanzania, and Rwanda. 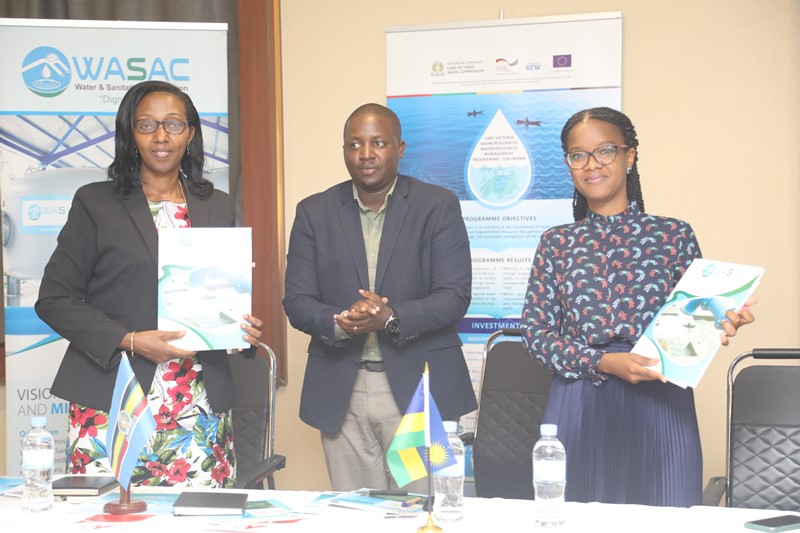 The project will be completed in three years, at a tune of Euros 8.1 million funded by the Federal Republic of Germany through the European Union and to be implemented by WASAC.

Furthermore, the project will collect domestic liquid waste from households in Kigali and will come with several advantages besides saving environment.

“The waste will be treated and turned into fertilizers, but we shall conduct feasibility study on turning the waste into fuel and other things in the long run,” Eng. Gisele Umuhumuza, the Acting CEO of WASAC said.

The project is aligned with Rwanda’s Vision 2050 which intends to ensure sustainable water supply and sanitation services for people.

The treatment plant has been recognized as a High Priority Investment (HPI) Project in the country’s development agenda –Vision 2050 – achievable through the country’s national strategy for Transformation (NST1) and the Green Growth and Climate Resilient Strategy (2017-2024).