President Paul Kagame says there is a need for a multinational political solution to the security challenges in the Great Lakes Region, particularly the conflict in the eastern Democratic Republic of Congo (DRC), rather than anybody apportioning blame, following a resurgence in fighting which threatens the stability of the region.

The Head of State, while addressing the 77th United Nations General Assembly (UNGA) in New York on Wednesday, without referencing the speech of the DR Congo President Felix Tshisekedi, who on Tuesday blamed the M23 insurgence on Rwanda, said that blame games cannot resolve the situation in DRC, which he insists requires a political solution.

President Kagame reiterated that the renewed conflict in Eastern DRC equally threatens Rwanda as it does the DRC, following recent attacks targeting the Rwandan territory, by terror group, the Democratic Forces for the Liberation of Rwanda (FDLR).

“In the eastern Democratic Republic of Congo, recent setbacks have served to highlight that the security situation is fundamentally no different than it was 20 years ago, when the largest and most expensive United Nations peacekeeping mission was first deployed. This has exposed neighbouring states, notably Rwanda, to cross-border attacks that are entirely preventable,” President Kagame said.

“There is an urgent need to find the political will to finally address the root causes of instability in eastern DRC. The blame game does not solve the problems. These challenges are not insurmountable, and solutions can be found. This would ultimately be much less costly in terms of both money and human lives,” he added in a short remark on DRC.

Referring to other global challenges, President Kagame said that the world is in a state of turbulence, with intersecting crises growing in scale and severity, including climate change, food price inflation, conflict, and uncontrolled migration, which call for the world to act with a sense of urgency.

“These challenges all require multilateral cooperation and efforts. Yet the perception, that the international system is no longer up to the task, has only deepened, particularly where the interests of powerful members are at stake. Despite shortcomings, there are examples to demonstrate that international cooperation can successfully address the issues that matter to all of us,” 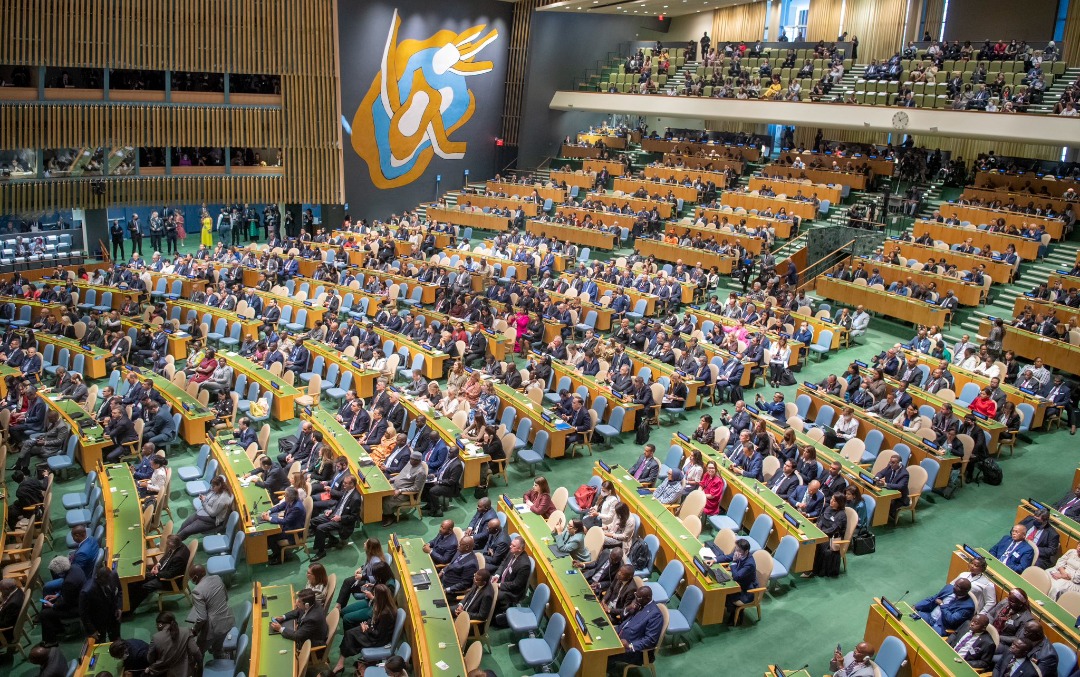 “Global health is a case in point. The Global Fund to Fight HIV, Tuberculosis, and Malaria has helped save countless lives in Africa and beyond, while also strengthening health systems. I hope that all countries will respond strongly, and sustain their commitments, at the 7th Global Fund replenishment session chaired by President Biden later today,” President Kagame said, adding that Africa is doing its part but must do more.

“For sustainability, external funding must go hand-in-hand with increased domestic financing for health. This is a priority which the African Union is tracking on an annual basis, and which I am honoured to lead on behalf of the organisation,” he said, citing some of the projects the continent is working with partners to bring end-to-end vaccine manufacturing through collaboration with BioNTech, and strong support from the European Union.

“This is critical to increase Africa’s resilience against future pandemics,” President Kagame said.

President Kagame said that the future of billions of children and young people across the world depends on overcoming the challenges of inclusion and quality of instruction, particularly as we recover from the pandemic, commending the UN Secretary-General for convening the Transforming Education Summit earlier this week.

“Away from the headlines, the United Nations and other multilateral institutions retain the ability to set an agenda, around which we can all rally. At the recent Commonwealth Heads of Government Meeting in Kigali, leaders adopted an ambitious program of action, including special instruments on Living Lands, Sustainable Urbanization, and Child Care Protection and Reform,”

“We also agreed to prioritize public-private partnerships to create digital jobs for young people across the Commonwealth. The future is digital and transformation is happening now, as evidenced by the ongoing work of the Broadband Commission for Sustainable Development and the Smart Africa Secretariat,” he pointed out.

The Head of State said that high-quality digital jobs are a practical response to the underlying drivers of irregular migration by closing the human capital investment gap that separates high- and low-income countries and to ensure that the benefits are equally shared, there must be continued investment equitably in emerging technologies, such as artificial intelligence.

In the area of peacebuilding and counterterrorism, President Kagame said that regional initiatives can complement the important work of the United Nations, citing examples on the continent.

“Regional or bilateral initiatives have been proven to make a big difference, whether in the Central African Republic, or the successful engagement to contain violent extremism in northern Mozambique conducted by Rwanda and the Southern African Development Community,”

“If this approach were tried properly in DRC, as proposed by the Nairobi Process, it would make a difference. However, to be sustainable, such efforts require consistent financial support from the international community. A lot is at stake, and time is not on our side,”

“We cannot anticipate or prevent every crisis. But we can be better prepared to react quickly and effectively when needed, especially if we work together,” President Kagame told world leaders.