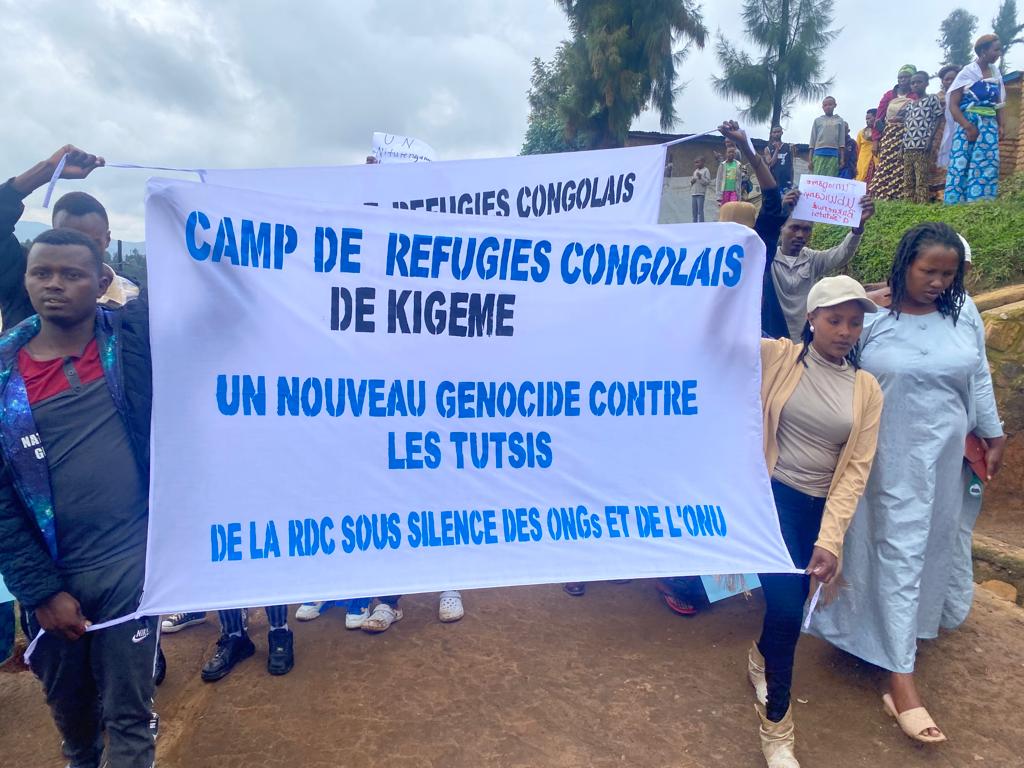 Congolese refugees in Rwanda are protesting what they are describing as a ‘silent genocide’ targeting Congolese of Tutsi origin following a recent upsurge in ethnic killings in the Democratic Republic of Congo (DRC).

The refugees who live in Kigeme Camp, Nyamagabe district, in the country’s Southern Province, took to the roads on Monday to condemn the ongoing silence of the international community as hundreds of their own continue to be killed in the conflict-ridden eastern part of the vast African nation.

The refugees, who have been living in Rwanda for more than two decades are asking the international community to protect their relatives in North Kivu and other parts of DRC who are being targeted because they are of Tutsi origin. They are also calling for full restoration of peace for them to return home.

The protesting refugees brandished placards denouncing the silence of the international community and called on the United Nations to act on the atrocities committed by armed groups, including FDRL, Nyatura, PARECO and Mai Mai, among others, who are allied to Congolese government forces.

Similar protests took place in Bunagana, near the DRC border with Uganda, where protesters denounced the ongoing killings which they are describing as a tactical genocide targeting Kinyarwanda-speaking Congolese and the killings blamed of M23.

The M23 rebel group, which says fights for the protection of Rwandophones, has debunked claims that they killed at least 131 people in Kishishe and Bambo – in the Rutsuhuru district of the eastern North Kivu province, instead blaming government forces FARDC and allied groups including FDLR. 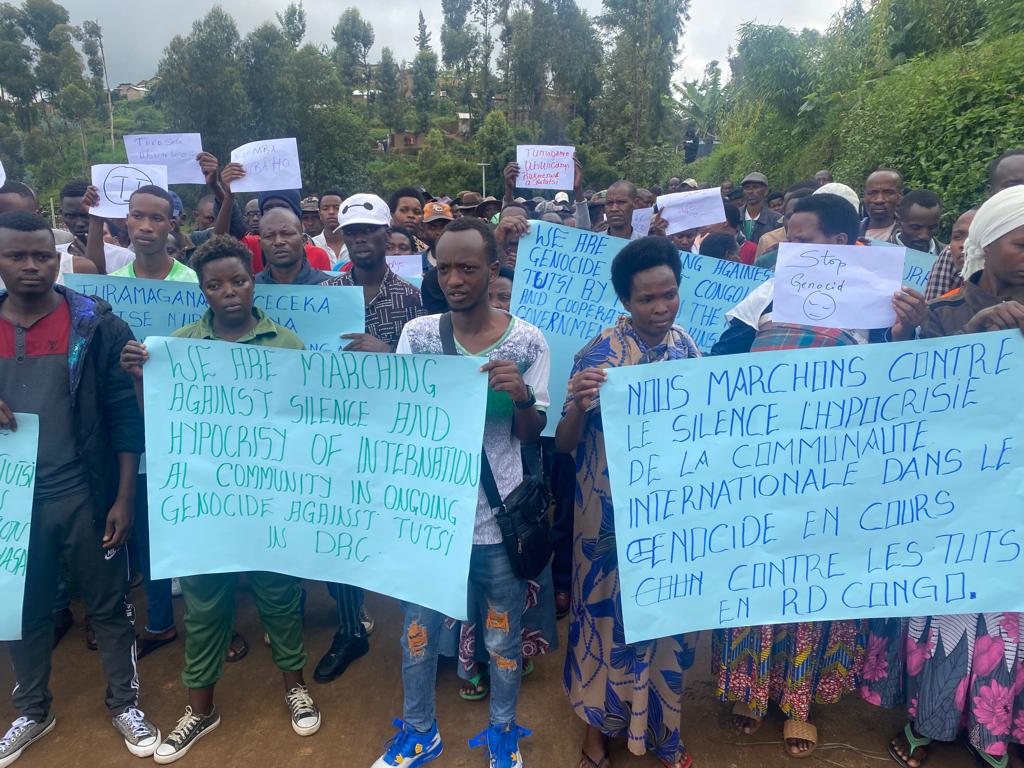 Amid blame games, Congolese refugees say more of the people especially in areas controlled by the government and armed groups continue to be killed in their numbers.

“We are here to condemn the ongoing genocide. We are here to protest against this life of being refugees all our lives. From birth, I was told that we are Tutsis and unwanted in our country, hence we had to flee,” said Faustin Kalisa, one of the protestors.

“We have a great country with all the resources but we cannot live in it. We are here as refugees, living in difficult conditions and our relatives we left behind are being killed. How long can this go on? We are extremely worried,” Kalisa said.

Lisele Bowune, who hails from Kisangani, but fled DRC because she was married to a ‘Tutsi husband’ said that while in Rwanda they are safe, they are worried that thousands if not millions of Congolese ‘categorised as Tutsi’ risk losing their lives in the ongoing violence being fueled by the Government of Felix Antoine Tshisekedi.

“All these years we have been here in camps, we can’t even get close to the border of our country of birth because of fear. Even our children can’t go there. I am Congolese, my husband is Congolese, I have never heard him speak Kinyarwanda even once. Our children are Congolese,” says Bowune, who is a mother of seven.

“I always ask God, what did we do to deserve this? Are we a cursed ethnicity? Why all this suffering,” she added. 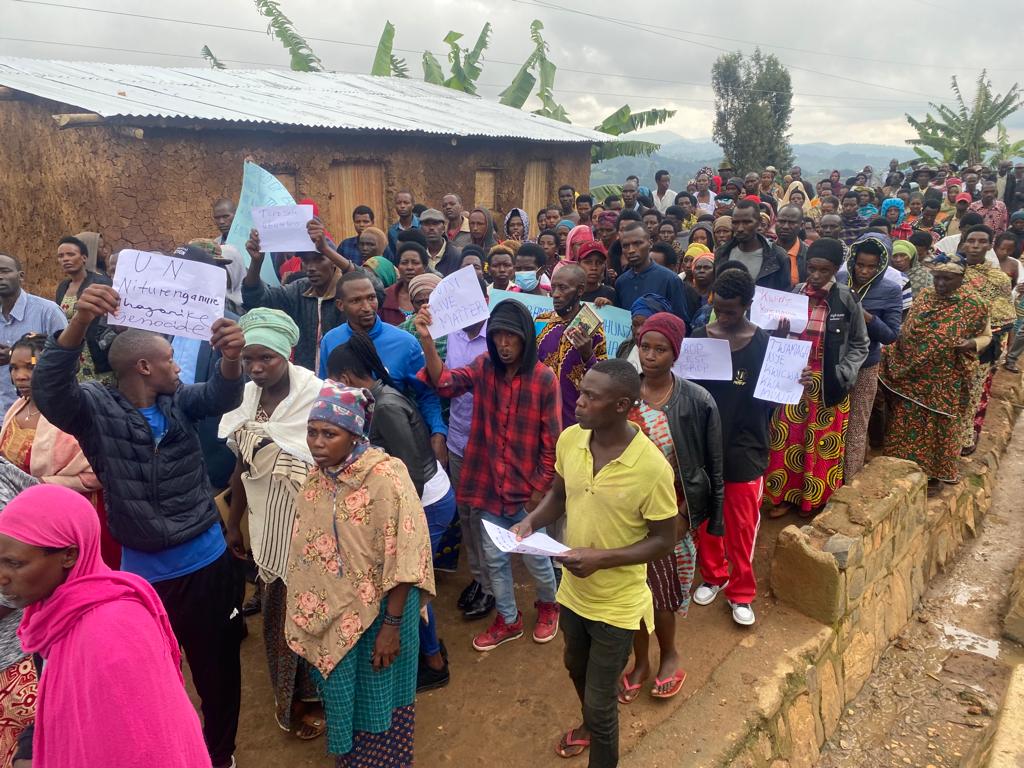 Elizabeth Nyirakibibi, who has been living in Kigeme Camp since July 2012, said that she fled DRC with her family when Congolese Tutsis were being targeted for who they were.

“This situation has continued. It gets worse everyday. We see videos of our own being decapitated in broad daylight. All the people here were born in North or South Kivu. This is our home, this is our country. We want justice, we want to go back home,”

“We are calling up the international community to come to our rescue because enough is enough,” Nyirakibibi said.

Kinyarwanda-speaking people make up to at least 5% of the population and inhabit North and South Kivu provinces, where they found themselves on the other side of the border during the partition and scramble for Africa. Rwanda hosts more than 75, 000 Congolese refugees who have been living in the country for nearly three decades now.

In a statement issued on November 30, Alice Wairimu Nderitu, Special Adviser on the Prevention of Genocide, condemned the escalation in fighting in the DRC following her official visit, pointing out that she was deeply alarmed by the escalation of violence in the Great Lakes Region where a genocide – the 1994 Genocide against the Tutsi in Rwanda – happened.

“The current violence is a warning sign of societal fragility and proof of the enduring presence of the conditions that allowed large-scale hatred and violence to erupt into a genocide in the past,” she said, citing the ethnic violence as a major concern for the international community.

However, M23 has accused the UN of taking sides in the ongoing violence, accusing the UN Peacekeeping force in DRC, MONUSCO, of taking sides and looking on as armed groups like FDLR, Nyatura, PARECO and Mai Mai continue to advance the genocide ideology.