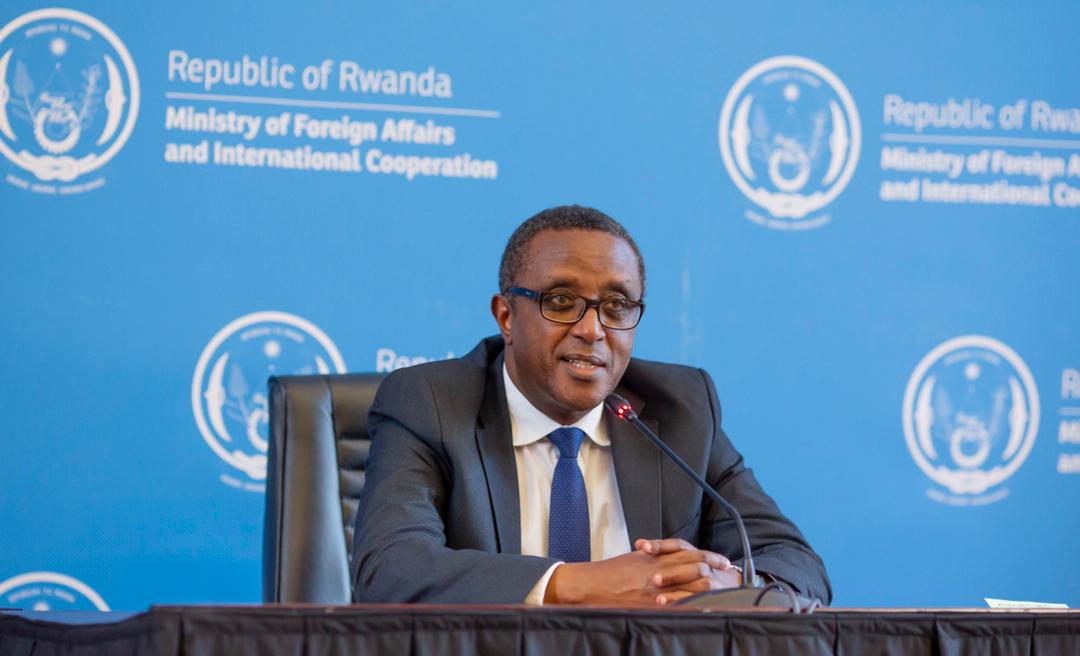 Rwanda says failure by the US government to address the root causes of insecurity in the Great Lakes Region, particularly in Eastern Democratic Republic of Congo (DRC), instead focusing on apportioning blame, amounts to external interference that does not provide a permanent solution.

Following a phone conversation between President Paul Kagame and US Secretary of State, Anthony J. Blinken, Rwanda’s Minister of Foreign Affairs, Dr. Vincent Biruta said that the US is not helping by leveling accusations of M23 support against Rwanda and failing to address the underlying issues that have led to insecurity in the region for nearly three decades now.

“A lasting solution requires the responsibility to be placed where it belongs:  The dysfunction of the DRC government and its institutions, and the support to FDLR,”

“External interference and dictates in regional and continental efforts that serve to shield DRC from accountability and emboldens them to be unresponsive to commitments made through ongoing processes. M23 should not be equated to Rwanda. It is not Rwanda’s problem to solve,” Dr. Biruta responded to Blinken via Twitter.

Minister Biruta reiterated that the security concerns of Rwanda need to be addressed, adding that where others may not feel obliged to, Rwanda is and will continue to do so.

Following the call and the statement issued by Blinken, Rwandans took to social media to ask why the US official did not mention at all the Democratic Forces for the Liberation of Rwanda (FDLR), an armed group mainly made up remnants and descendants of perpetrators of the 1994 Genocide against the Tutsi, who Rwanda says remain a threat to her security.

A statement attributed to US State Department Spokesperson Ned Price says that during the call Secretary Blinken expressed strong support for regional mediation and dialogue led by Angola and the East African Community.

“He underscored the need for concrete progress on and implementation of commitments made during these discussions, including the November 23 Luanda Mini-Summit on Peace and Security communiqué,” the statement reads, adding that Blinken made it clear that any external support to non-state armed groups in the DRC must end, “including Rwanda’s assistance to M23.”

Rwanda maintains that to address the persistent conflict in Eastern DRC, the root causes must be addressed, including the presence of FDLR on DRC territory from where they continue to threaten Rwanda’s security and also failure by Kinshasa to address grievances of Kinyarwanda-speaking communities in the country, which in the first place led to the birth of M23.

Speaking in Parliament last week, President Kagame said that the international community has for nearly three decades not been able to holistically address the causes of the conflict, starting with the failure to tackle the FDLR concern, while at the same time the DRC government has been allowed to get away with its own internal failures and incompetence that has fueled conflict.

Among other things, Kinshasa is accused of inciting ethnic violence targeting Kinyarwanda-speaking Congolese, also known as Rwandophones, which has emboldened the M23 to continue fighting against what they say is turning into a genocide of Congolese Tutsi.

DRC’s Felix Antoine Tshisekedi called on thousands of Congolese youth to enlist in the army and join vigilante groups to fight against ‘Rwanda’s aggression’, a call which saw attacks targeting the Congolese Tutsi increase in scale. Tshisekedi has refused to hold talks with M23, with his government insisting that the group is a ‘terrorist organisation.’

Regional efforts led by the EAC and the ICGLR are continuing amid blame games between the Congolese government forces and M23 over the most recent massacres in Kishishe, Rutshuru Territory on November 29.

M23 maintains that the Kishishe killings were heavily manipulated and publicized for political reasons, pointing out that the massacres were carried out by PARECO, one of the many armed groups in DRC affiliated to FARDC, and the blame was put on M23 by the Congolese government to tarnish the image of the group.

A statement issued by the M23 president, Bertrand Bisimwa, accuses the DRC government of manipulating the truth to wrongly implicate M23 in massacres carried out by Congolese government forces and armed groups allied to them including FDLR, PARECO, Nyatura, APCLS and Mai Mai, among others.