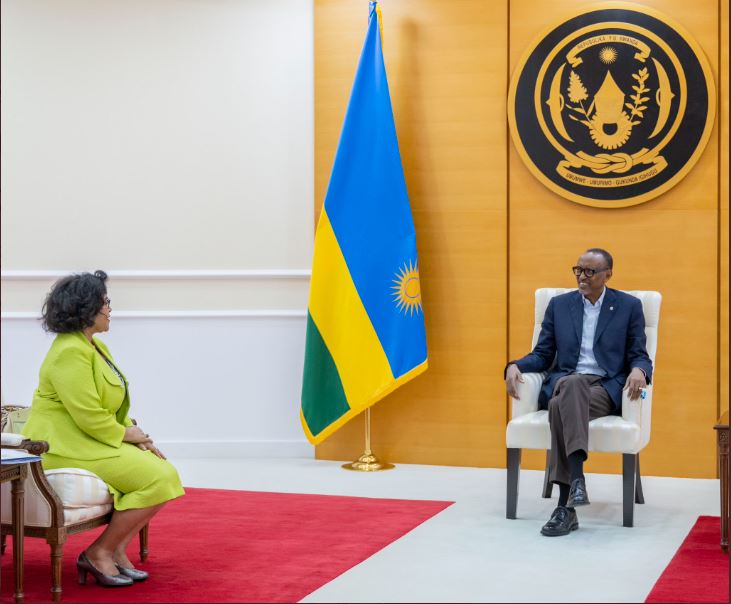 President Paul Kagame has met with the CEO of New Partnership for Africa’s Development (NEPAD) to discuss progress of ongoing infrastructure projects.

The President who is also the Chair of NEPA Heads of State and Government Orientation Committee, received Bekele-Thomas at Urugwiro Village in Kigali, January 21, 2023.

Bekele-Thomas has held discussions with Heads of States in preparation of the Second Dakar Financing Summit which will take place on 1 – 3 February 2023 in Dakar, Senegal.

The meeting will bring together members of this group, and African leaders to collectively learn how the continent is progressing and how to accelerate the projects aimed at building common infrastructure in various sectors.

The Summit will be opened by the president of Senegal and African Union (AU) Chairperson, President Macky Sall (Senegal) and attended by Heads of State and representatives of African Union, the Private Sector, Development Finance Institutions (DFIs), institutional investors and development partners.

By bringing together the highest decision-makers from the public and private sectors, the Summit will feature a Presidential Roundtable and ministerial dialogues that will provide space to find practical ways to accelerate the implementation of the Programme for Infrastructure Development in Africa (PIDA) by improving the outlook for financing of project preparation and aligning project needs with existing funding initiatives.

Additionally, through project deal-rooms, potential investors will also have an opportunity to discuss   the financial viability of projects with the member state project-sponsors.

The PIDA initiative requires a total amount of $11.3 billion which includes the cost of an independent advisory panel of experts (supported by DFID), regional and sector consultative workshops (supported by National Trade Corridors Fund -NTCF and European Union-EU) and implementation of an infrastructure database (supported by the EU).