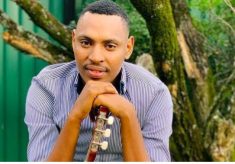 [caption id="attachment_63136" align="alignnone" width="624"] Artist Charles Kagame[/caption] Rwanda’s gospel singer Charles Kagame who is based in Australia has gone back to the studio to work on his maiden album after nasty car accident which he narrowly survived.  The Naragukunze hit maker disclosed the information while premiering his new song dubbed Amakuru, which will feature on…
Read More
ShowBiz
Tags: Local Music