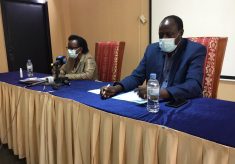 [caption id="attachment_66939" align="aligncenter" width="2048"] NCHR says Rusesabagina's rights are respected.[/caption] The National Commission for Human Rights (NCHR) says terror-suspect Paul Rusesabagina is being accorded his full rights, refuting claims by his family that he is being denied basic needs in jail. On Friday, the commission said it visited the ‘Hotel Rwanda’ movie protagonist in Nyarugenge…
Read More
National
Tags: Latestnews, Rusesabagina
“We Must Be Diligent in Securing Better Lives for Our People”- Kagame to RDF
June,11 2021 Edmund Kagire Comments(0) 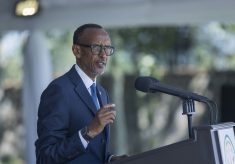 [caption id="attachment_66922" align="aligncenter" width="2047"] President Kagame speaking at the graduation ceremony. Photos/Village Urugwiro.[/caption] President Paul Kagame has challenged members of Rwanda Defence Force (RDF) to be more diligent and uncompromising in whatever they do, to ensure the stability and security of the country and the people. The Head of State, who is also the Commander-in-Chief…
Read More
National
Tags: Latestnews, RDF
A Year in Photos: EU, City of Kigali Launch World Press Photo Exhibition
June,11 2021 Edmund Kagire Comments(0)

[caption id="attachment_66906" align="aligncenter" width="1024"] The Ambassador of the European Union in Rwanda, Nicola Bellomo, the Mayor of City of Kigali, Pudence Rubingisa and Matthijs Wolters, the Ambassador of the Kingdom of the Netherlands in Rwanda[/caption] The year 2020 was an eventful year across the world. It is the year the world was turned upside down…
Read More
National
Tags: European Union, Latestnews