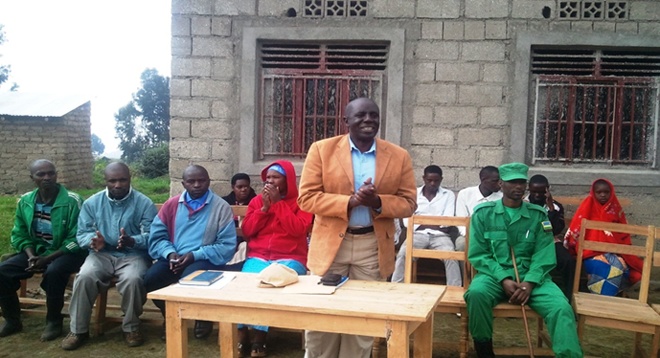 Rwandans living along the border with Democratic Republic of Congo are persuading Rwandan rebels across the border to abandon rebellion peacefully and return home.

Early this week, Adjudant Jean Pierre Bizimungu 34 a member of the FDLR rebels was convinced to dessert and crossover back into his country.

Bizimungu was also serving in the Congolese army FARDC in a platoon stationed at Hehu village in DRC near Bugeshi sector of Rubavu district in Rwanda.

A number of Rwandans that crossed into DRC daily always stopped and interacted with him in Kinyarwanda convincing him that Rwanda was very peaceful and developing.

“We did our best to make him desert the Congolese army and stop being part of people that threaten Rwandan security,” Anastase Hitayezu, in charge of security in Hehu village told a Kigali Today journalist in Rubavu district.

The Rwandan community from this region had been reporting cases of looting by the Congolese army.

They were prompted to start investigating a soldier called Adjudant Jean Pierre Bizimungu 34, for the past four months.

At several occasions, they even gave him food after learning that his battalion did not have enough. Later on, they even got his phone number, and started reminding him there was no better place than home.

“I was first reluctant to return because I doubted about my security once at home,” says Bizimungu originally born in Kinazi, in Ruhango district, southern Rwanda.

Bizimungu has now deserted and he came dressed in Congolese military uniform and carrying a gun, which he reported to the Rwanda Defense Forces operating from Rubavu.

He is looking forward to supporting the Rubavu residents’ campaign to repatriate three more Rwandans in his battalion.

Meanwhile, Lieutenant Colonel Nibabaza a.k.a Mambo Gerald, former head of G1 in the administration of Democratic Front for Liberation of Rwanda (FDLR-FOCA) just repatriated with his wife, a Sergeant and five other combatants a week ago.