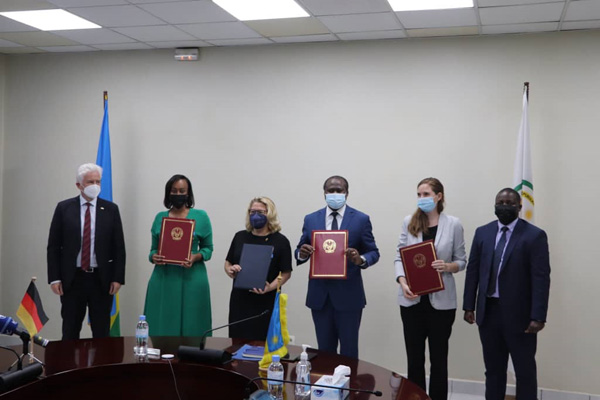 Germany and Rwanda have signed and launched a New Climate and Development Partnership and funding agreement worth €56million to support Rwanda’s green growth and climate resilience for sustainable development in the city of Kigali and other parts of the country.

The high-level ceremony was held in Kigali March 1, 2022 and witnessed by Svenja Schulze, German Federal Minister for Economic Cooperation and Development, Uzziel Ndagijimana, Minister of Finance and Economic Planning, and Patrick Karera, Permanent Secretary in the Ministry of Environment.
The German delegation had earlier on also meet with President Paul Kagame to discuss more on Climate and Development Partnership and further bilateral relationship between both countries.
The Climate and Development Partnership is aimed at working together to implement Rwanda’s climate action plan, also known as Nationally Determined Contributions (NDCs) to the Paris Agreement.
Rwanda was the first African country to submit an updated NDC in 2020, which has gained international recognition.
Under its NDCs, Rwanda has committed to reducing its greenhouse gas emissions by 38% by 2030 compared to a business-as-usual scenario – under the condition of international support and funding, complementing domestic resources.
Other important parts of the NDCs relate to adaptation matters such as water security, agriculture, land and forestry, settlements and health.
The new partnership between Germany and Rwanda gives particular attention to NDC implementation projects through the Rwanda Green Fund (FONERWA) and to sustainable urban development measures.
The Federal Minister for Economic Cooperation and Development, Schulze, said:
“The climate crisis affects all of us. We can only tackle this global threat by global cooperation. Fighting climate change is one of the top priorities of the German government and development cooperation is a very important part of this endeavour. Rwanda is a driving force in international cooperation on climate action. Together, we want to move forward into a carbon-neutral and sustainable future.”
Ndagijimana, Rwanda’s Minister of Finance and Economic Planning, welcomed the partnership as a new chapter in the bilateral cooperation.
He said the partnership is aligned with National Strategy for Transformation One (NST1) under the Economic Transformation Pillar with the main objective to accelerate private sector-led economic growth and increased productivity focusing on promotion of sustainable management of the environment and natural resources to transition Rwanda towards a Green Economy.
Furthermore, Ndagijimana said the partnership comes to support Rwanda’s Nationally Determined Contributions targets that are estimated at $11 billion in investments.
Dr Jeanne d’Arc Mujawamariya, Minister of Environment said this partnership contributes to  the country’s strategies to have clear climate resilience measures that are tailored to the communities’ livelihoods and joining hands to embark on the climate and development journey and lead to the concrete implemention of national plans to have a green and climate resilient Rwanda.
The impacts of climate change can already be felt in Rwanda today.
For instance, temperatures are rising and weather patterns are changing, landslides and floods are increasing with over 200 lives lost in 2021, particularly affecting the poor, rural population; therefore, making climate action a focus of highest political importance for the Government of Rwanda.
Therefore the Rwandan-German Climate and Development Partnership will scale up support for climate measures in the areas of intervention “Climate change mitigation and adaptation” and “Sustainable urban development”, on the basis of Rwanda’s NDC Implementation Framework.
This plan involve programs combining capacity development and financial support for the implementation of the Rwandan NDCs, strengthening the population’s climate resilience (involving reforestation measures, flood protection and water management enabling climate-resilient agriculture), as well as sustainable waste management and the circular economy.
Green Climate resilient Kigali
In the field of climate-smart urban development the country’s focus lies on the construction of a new settlement Green City Kigali, with a high urban density and affordable housing for up to 8,000 inhabitants, quality and green urban infrastructure including nature-based solutions for drainage and heat absorption, rainwater use and fresh water supply as well as waste water treatment.
At today’s signing ceremony Rwanda and Germany also kicked off the implementation of priority projects of the new partnership of a total envelope of €56 million.
The financing agreements for the urban development project Green City Kigali (€30 million) and for the implementation of the Rwandan NDCs through the NDC Facility at the Rwanda Green Fund (€26 million) were signed with the German Development Bank KfW.
Complementing climate adaptation and mitigation projects in Rwanda, both countries also cooperate in international climate initiatives, particularly in the Taskforce on Access to Climate Finance and the NDC Partnership.
The new Climate and Development Partnership builds on the existing portfolio, which adds up to a total of €163 million.
Germany officials said that they intend to make further funds available in future.

BioNTech Vaccines Production in Rwanda to Kick Start in 24 Months