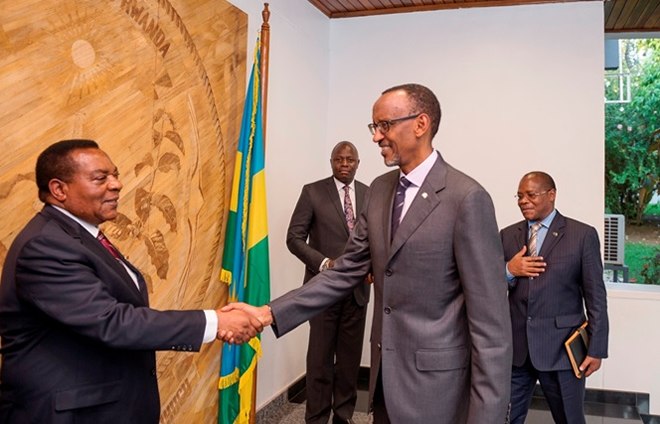 In an unexpected circumstance, Tanzania is openly defending Rwanda against allegations that have put the country in a hostile relationship with its closest neighbour, Burundi.

Tanzania’s Foreign Affairs Minister, Augustine Mahiga, who is on a working visit to Rwanda, said the allegations that Rwanda is arming refugees to revolt against President Pierre Nkurunziza is an “invention.”

President Nkurunziza has refused to step down since riots began last year, protesting against his third term.

In a diversionary tactic due to immense pressure, President Nkurunziza is blaming Rwanda for the mess in his country.

Following the repeated accusations, Rwanda has decided to relocate all Burundian refugees to another country, which is yet to be announced.

Mushikiwabo said Rwanda could not bear ‘more politicking sounding the issue’ of Burundi.

Minister Mahiga said Rwanda’s decision is understandable. “I understand the very agonizing decision that Rwanda is considering,” he said.

“It is been a basis of flying rumours, criticism and counter criticism,” Mahiga told journalists in Kigali before he flew back to Dar-es-salaam.

Meanwhile, Tanzania is one of the hosts of thousands of Burundian refugees and has, however, been Burundi’s closest ally.

Yes, according to Minister Mahiga, Burundian refugees are causing havoc in his country.

“We have identified some elements that belong to the Burundi military…we have also arrested some elements engaging some recruitments and we had to take them to court and jail them,” said Mahiga.

Minister Mushikiwabo told KT Press that part of the discussions with President Kagame centered on Burundi.

“When Rwanda and Tanzania meet, we discuss Burundi. It is a problem of the day,” she said.

“We regretted that the problem has not been resolved and our wish is to see Burundi get back on track,” Mushikiwabo said.

Minister Mahiga asserted his sympathy for Rwanda in dealing with the issue.

The two countries agreed to engage the international community on the matter, but Minister Mahiga insisted that “the final decision will be with the Rwandans.”

Meanwhile, Mahiga had earlier met with his counterpart, Minister Mushikiwabo, and discussed how the two countries can deepen bilateral partnership.

They focused on collective skills transfer, investment in development projects and peace and security in the region.

Mahiga also had a luncheon with members of the business community and discussed opportunities to increase trade and business between both countries.

Earlier, he, and his delegation, paid tribute to the victims of the 1994 Genocide against Tutsi at the Kigali Genocide Memorial.

He said that the history of the Genocide is a shocking experience.

“I find it difficult to comprehend this. But this museum has to be there as a lesson, as a teacher, as a memorial,” he said.

He said how Rwanda has managed to reconcile and rebuild itself is an experience other troubled countries should copy to create systems that will bring “understanding, coexistence, and prosperity”.