Take me to the moon: Rwanda breeding geeks 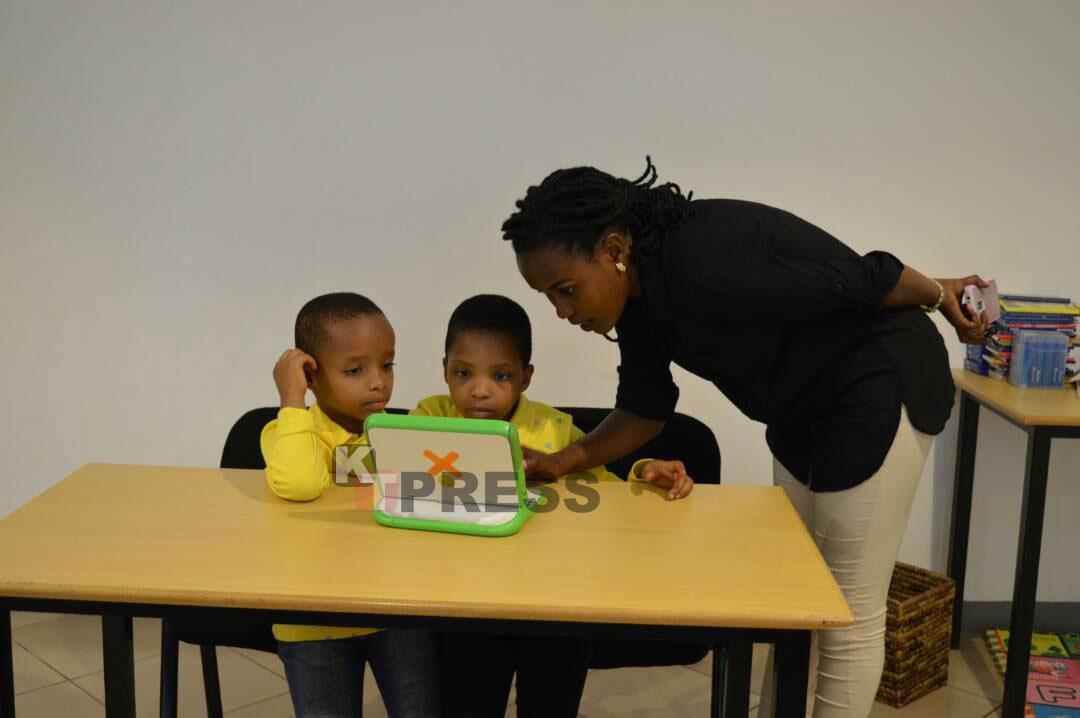 It is an awfully hot Friday. The scotching sun has gone terribly wild. The nauseating dry haze has arrested the rolling hills of Gisozi, a suburban neighborhood of Rwanda’s Capital City, Kigali.

People on the street are sweaty, thirsty, but enthusiastically up and running. The noise pollution from a busy carpentry workshop is too irritating.

A nearby primary school is under siege. First, the temperature in classrooms is disturbingly high.

Magnifique Uwase’s classroom is heating-up like a Japanese Jacuzzi. Students are sweating, tired and hungry, but tenacious. Something powerful is holding them up. Passion.

Uwase, the 11-years old light-skinned skinny girl is a perfect reflection of that passion. She is the most nagging in her class. “Please, please….please teacher,” she repeatedly calls the teacher to come and explain a computerized mathematical task.

Each student has a laptop from which they learn how to solve mathematical tasks, such as geometry. They draw mathematical figures, such as squares, triangles and circles.

The class setting is epic; in a U-shape arrangement and intensely interactive. The teacher literary forces students out for lunch.

For teachers, this is a humble begging of developing brains that might end up in Silicon Valley. The difference is, though, “it’s just the begging of grasping the tech-world from scratch,” says Sandrine Mukakagina, Uwase’s Mathematics and Computer teacher.

Sometime in 2005, Prof. Nicholas Negroponte, presented a to a UN-sponsored World Summit on the Information Society in Tunis, Tunisia, a project called One Laptop Per Child of which he is the founder and chairperson.

Rwanda’s President Paul Kagame had attended the summit. Kagame was fascinated and thought it was such a great idea to explore.

Guided by Rwanda’s development blueprint of transforming the country into a knowledge based middle class economy, his cabinet approved a pilot to distribute 10,000 laptops around the country.

If the pilot became successful, the cabinet agreed, the country would order for more laptops. Eventually, the pilot over performed marking the beginning of Rwanda’s pursuit for advanced technologies.

Rwanda decided, “The principal…is to provide every student with the opportunity to have a personal computer or at least to share the computer with a few other students,” says Prof. Lwakabamba, the minister of education.

“We believe that this will ensure every student in Rwanda has the opportunity to be equipped with computer skills,” he adds.

Nkubito Bakuramutsa, the national coordinator the OLPC Project, says, “We are preparing Rwandan kids for critical thinking, opportunity to innovate and later to create.”

Rwanda is a landlocked country with barely no natural resources. “Only quality education would rescue Rwanda,” says Bakuramutsa, the coordinator of the project. “And we mean, education that focuses on promotion of science and technology, critical thinking and positive values.”

Meanwhile, the country had no idea how daunting undertaking a project of such a magnitude would be.

First, teachers had not been trained to offer lessons using computers. An immediate solution was to hire IT-savvy teachers from Singapore Finland or California in the US.

Economically, the country was not in position to afford such an expensive venture.

In mind, however, says Prof. Lwakabamba, Rwanda figured it out that, “This project was inevitable, it was one of the key strategies to achieve the country’s [ICT] vision.”

President Kagame endorsed the project and took the lead, demanding for regular reports.

Ten years later, today, 204,000 laptops have been distributed in 407 schools around the country, making Rwanda the 3rd largest deployment in the world after Peru and Uruguay. Kenyan Members of parliament have visited Rwanda twice to learn how best they will implement a similar project.

Unique about Rwanda’s deployment is that, it also caters for the deaf and the mute students who are better equipped to learn using visual tools such as animations.

These gadgets, robotic and waterproof as they are, are graphic rich and designed for both urban and rural environment.

The second challenge the project needed to address immediately was connectivity to the internet and electricity. Schools with no electricity are still waiting to be connected to the national grid.

Those with electricity were provided with content hosted on servers. At the moment, 200 schools are connected to a server, a wireless local area access point, and digital content including, eBooks, math, science and English courses.

The server is also equipped with a school management and information system with security features to track laptops.

Meanwhile, with all the political blessing and support from national institutions, the project caught the society off guard.

Barely no teacher was prepared to use a computer as a teaching tool. “It was a disaster,” says Bakuramutsa. Yet, teachers were a major component to the project implementation.

Some schools, all urban, were technologically ready.

“In fact, those few needed extra computers,” says Bakuramutsa. But those from the rural areas did not even want to see them. District education inspectors would find laptops still dumped somewhere in stores.

“They were resistive,” says Bakuramutsa. Some teachers had never seen computers before, he adds. “Those who had seen them had never used them.”

Traditionally, a teacher is the custodian of knowledge. “When the kids exhibited a tech-savvy cult, teachers felt their knowledge had been put into question,” says Bakuramutsa.

That, he says, was a serious challenge the project had not anticipated. “The mindset in teachers was tough to change.”

Prof. George Njoroge is the Principal for Rwanda’s College of Education. He explains what the teachers were facing. “It is pressure. It is for everybody,” he says.

He is a Kenyan academician hired by the government to help build a desirable teaching structure. He says, “The country is also pressured to fit into the IT globalized world.” “Who do you think will drive this vision? It is the schools.”

Teachers back to school

With the advent of the OLPC project, the government decided thousands of teachers had to undergo a vigorous refresher training, including Sandrine Mukakagina, Uwase’s Mathematics and Computer Science teacher.

The College of Education has been ordered to ensure all students take a compulsory computing course and train how to access and use open source materials.

“We are pursuing the learner-centered methodology,” says Prof. Njoroge. “Pupils have now learnt how to play around with computers, most especially how to surf the Internet and get maps and scientific diagrams of various parts of the human anatomy.”

This, according to Prof Njoroge, makes the teachers not the “I know all” anymore. “They only facilitators.”

Some geeks in place

Meanwhile, Bakuramutsa says, there is a growing number of 9, to 10 and 11year-olds programmers learning logic, solving mathematic problems and creating game. Some are using programming languages such as Etoys and Scratch.

The government believes this exposes children to possible careers through information technology. “They are the future software engineers,” says Bakuramutsa.

However, this also demands for teacher prepare and deliver their lessons using digital content.

Nehemia Ayirwanda is a sophomore at the college of education. He never had the opportunity to see or use a computer in his high school. “I never met such a tool,” he says. But he is aware the challenge ahead. “I have no choice but to study computing.”

Prof Njoroge believes “What happens in classrooms has an indicator to where the country wants to go.” “We have to prepare teachers who will drive the country’s ambition.”

The ministry of education is reviewing the national curriculum and pushing for appropriate infrastructure in order to produce the desired ICT society.

The government has completed the physical burying of a $100m fibre optic cable underneath all the 30 districts, which includes civil works and laying of ducts.

The US based university, Carnegie Melon, is already in Rwanda to accelerate the ambition. “Not that we don’t have technology universities, but the presence of such institutions tells you where we are heading to,” says Bakuramutsa.

CMU has campus in Kigali. Students receive the same quality of training as those at the main campus in USA. The purpose of Rwanda having partnered with CMU to set up a campus in the country was to close the gap that might be created throughout the development of a highly skilled IT society.

Michel Bezy, is CMU’s Associate Director. He discussed with The New Times, a local daily a few weeks ago, about CMU’s vision in relation to Rwanda’s goal.

“If you look at how the ICT industry developed in the US in the Silicon Valley, it began with a world class university, Stanford University,” says Bezy. “It may take a bit of time, but slowly there will be a knowledge base that will be able to take on the future of ICT [in Rwanda].”

Jeff Gasana is one of Rwanda’s finest IT entrepreneurs. He runs a software and IT solutions company; SMS Media Ltd, in Rwanda with subsidiaries in 13 countries. His has suffered so dearly to get skilled staff to help him expand his business. “With this project, I am starting to have hope for a better future,” he says. “The IT industry lacks a lot of expertise, so with these kids cropping up, we believe they will balance the equation.”

Uwase from Gisozi Primary School is one of the beneficiaries of this dramatic investment into ICT in education. She is a future computer geek. She says her dream is to become a mathematician and a software engineer.

This ambition puts insurmountable pressure on teachers and the government. Prof. Njoroge believes the only option to deal with the pressure is to simply provide the tools and develop transformative teachers. “If not, then forget the [ICT] vision.”

But the transformation goes hand in hand with the tools at disposal. “We have the tools now, and a visions. The next thing is,” says Bakuramutsa, “a fundamental change. And that is what we are undergoing.”

Thousands of Rwandans descend on Atlanta to meet their President

Inside story of why Rwanda Senate president resigned