“A glass of milk” brought Kagame and me together – First Lady 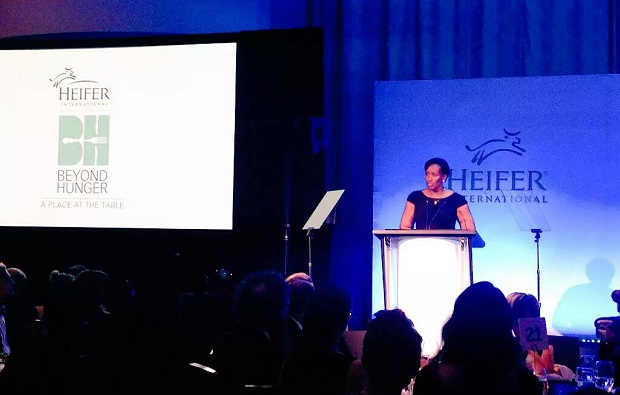 Rwanda’s First Lady Jeannette Kagame has told an audience in Los Angeles (USA) of the special place cows hold in Rwandan society – as they have pulled thousands out of poverty.

“Heifer donations of cows hold a special meaning, their worth represent social ties deeply rooted in our traditions,” said Mrs Kagame at a ‘Beyond Hunger’ gala hosted by Heifer International on Friday evening.

The organisation hosted the 4th Annual “Beyond Hunger: A Place at the Table,” gala event in Los Angeles. The celebrity-filled event brought together advocates in the fight against extreme poverty.

Sharing a personal story, the First Lady told her audience that it was “a glass of milk” that brought President Paul Kagame and her together.

“I lend my voice to the Rwandans impacted by this partnership and testify that it could only be a natural fit in our values,” she added.

Since 1944 Heifer International has assisted more than 18.5 million families—79 million people—move from poverty to prosperity. In Rwanda, it has been operational for the last 15 years – and available data shows it has assisted more than 45,000 families to improve  food security, a move that has helped government significantly cut extreme poverty.

Heifer International has been one of the partners to government in its ‘One Cow Per Family’ program under which, for years, the poorest homes have been given a free cow. Figures show more than 250,000 cows have been distributed.

In July this year, Pierre Ferrari, the chief executive officer and president of Heifer International, was in Rwanda.

“We are proud to have Her Excellency the First Lady of Rwanda, Madam Jeannette Kagame at our Beyond Hunger Gala,” said Ferrari at the event in Los Angeles yesterday.

Meanwhile, at the gala, Chris Gero of Yamaha Entertainment, emerged as the 2015 ‘BeyondHunger’ Noble Globe awardee.