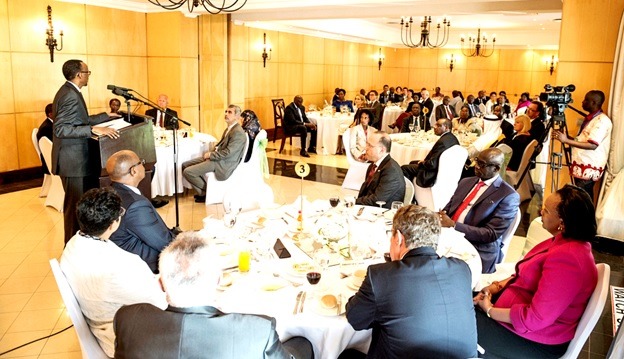 President Paul Kagame addresses diplomats in Rwanda during a luncheon

At a glamorous annual diplomat luncheon held at Village Urugwiro, President Paul Kagame clarified in a brief but precise address, Rwanda’s engagement with the rest of the world.

He explained that Rwanda’s desire and commitment to engage with the wider international community is driven by what Rwandans stand for as a people; “We contribute meaningfully to global cooperation because it reflects who we are as a people.”

The President said that Rwanda values open dialogue and, “we listen carefully and also contribute, where we can.”

He also expressed gratitude for the support Rwanda has received from the international community in the past two decades as the country struggled to emerge from the difficult times as a result of the genocide against the Tutsi in 1994.

“We very much appreciate all that you do, to keep our relations strong,” he said. “For us, this counts for a lot. Thank you for what we have achieved together and look forward to more as we continue to make progress we want and deserve.”

As usual, he repeated what he has always said about Rwanda’s ambitions and aspirations.

In Rwanda, he said, “we are determined to prosper. Rwandans are working to be our best selves, fully responsible for our future, a burden to no one.”

“You are in a position to see this first-hand and provide useful context, back to headquarters, when called upon,” Kagame said.

Uganda’s Ambassador to Rwanda, Richard Kabonero, the Dean of Ambassadors in Rwanda, a post he has held since 2008, spoke briefly and described how the international community understands Rwanda. By quoting Kagame, he said, “We will make this country prosperous not by riding on back of others but based on our abilities.”

President Kagame later talked about how indeed Rwanda desires with all efforts, to become a self-reliant nation in the near future.

“There is no doubt, we need to be who we are. We can work to be better versions of who are.” “That is what we struggle to achieve,” he said.

Before concluding his address, President Kagame, who lost his mother on November 23, 2015, thanked everyone for the condolences and support he received during the hard time.

“Thank you for the messages of condolences received when my mother passed away. There are moments when we are just humans, thank you for being with us in those moments.”