Rwandan mother having her baby vaccinated

Mothers working for public and private employers can now begin applying for the newly enacted 12-weeks maternity leave to attend to their newborn babies, under the new law which has been published in the national gazette.

Minister of Justice, Johnston Busingye expects that institutions will comply with maternity protection law without any delay, given that, “Ignorance of the law is no defense.”

President Paul Kagame, in March 2015, while chairing an extraordinary cabinet meeting approved the law allowing mothers to get 100% of their salary while on a 12-weeks leave.

Under the previous law, mothers only received full salary during first half of maternity leave and in second half were required to surrender 80% of salary or return to work.

With the new law, every month any employer from either private or public institution will contribute 0.3% of every employee’s net salary. Every employee will also give 0.3% from his/her net salary.

The total sum (0.6%) will be remitted by the employer to the Social Security Administration, which is a department of Rwanda Social Security Board (RSSB), not later than 15th of every month.

The money in this scheme is destined to cover the second half of maternity leave of every working mother. In this half which is 6 weeks the mother only used to get 20% of her salary.

According to the law, any beneficiary who subscribed for at least one month is entitled to the benefits.

Employers are required by law to pay the employee maternity leave benefits due by RSSB and claim reimbursement which shall be made within the next thirty (30) days.

In case of delay of payment, the employer will be fined with 1.5% of every month that was not covered.

“Mothers will no longer have to face the tough decision of either completing the entire leave period and lose a huge part of their family’s income or going back to work before they or the baby is strong enough to be separated for long hours,” said Moses Kazoora, communication director at RSSB which has the mandate to manage the scheme.

“I can’t imagine my wife leaving our baby with the maid just a few weeks after birth,” Martin Sibomana, a civil servant told KT Press that in the near future if they decide to have another child, the new maternity law will enable his wife spend more time with the baby but retain her salary. 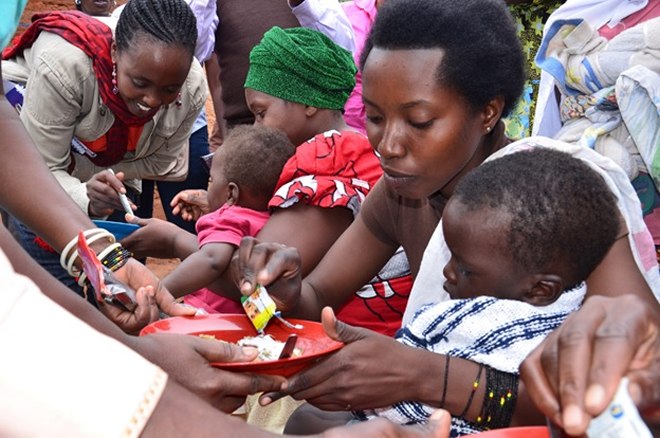 Rwandan mothers during a community sensitization campaign to combat Malnutrition

Currently, a salary of an employee from formal sector is paid with some other deductions.

These include 7% contribution to the health insurance, a pension of 3% and a tax on salary-Pay As You Earn which is the difference between the earning and Rwf 30,000, multiplied by 20% for those earning lower than Rwf 100,000.

Employees earning higher than Rwf 100,000 monthly, the Pay As You Earn is the difference between the earning and Rwf 100,000, multiplied by 30%.

In a previous story, employers said they are committed to do the deduction for the well-off of a Rwandan mother.

“It is not a burden to us,” said Ritesh Patel, Chief Finance Officer of Utexrwa Ltd, a textile factory in Kigali.

“Provided that when a mother comes back, she delivers to the company’s expectation ,” Patel said.

The day the new maternity fund will be operational, UTEXRWA will be contributing Rwf 120,000 ($174) monthly.

Kazoora said, “We hope the order will come out within a month or so, and then mothers will start benefiting from the fund.”

Rwanda and US University Sign Deal to Invest in Social Impact

Meet The Most Hated Woman in FDLR