Home NewsNational Could Rwanda Be Facing a Shortage of Condoms?
National

Could Rwanda Be Facing a Shortage of Condoms? 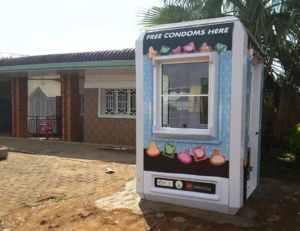 Issa Masengesho is preparing to close his shop at 11 pm in the busy night spot around Prince House in Remera in the capital Kigali. But there are two clients he is not ready to serve.

The clients seem to be ready to double the price of the product they are looking for. Unfortunately, Masengesho and other shopkeepers in the neighbourhood have not stocked product for the last two weeks. The products are scarce.

Both Masengesho’s clients are looking for condoms.

“They come to buy condoms when they have agreed with the woman they are to sleep with. They are much disappointed when they don’t get them,” Masengesho who normally sells a whole or two dispensers of condoms of different kinds told KT Press.

Like at Masengesho’s shop, the demand for condoms around the country is increasing day by day.

In a mini survey conducted by KT Press around Kigali and three other secondary cities; Musanze, Huye and Nyagatare, most people complained they were not getting condoms in the nearest shops while others who had could hike the price.

“We don’t know what is happening. You either forget sex or go live (having live sex),” a man who had come to buy condoms in Remera said.

For sex workers around Migina-Kigali’s popular place for sex workers, scarcity of condoms leads to having unprotected sex. “You see him as a potential customer and cannot let him go, so you decide to do it (sex) without a condom,” Uwase, a sex worker said.

Uwase says having sex without a condom requires the customer to double the price which goes up to Rwf15, 000 ($18) but the scarcity of condoms, she says, let sex workers give bonus to their clients.

“Yes. When he is not willing to give that amount, he gives you normal price and gets a bonus. My children need food,” a sex worker and mother of three at Agence pub in Remera said.

According to Society for Family Health (SFH), the main wholesaler of the country’s two subsidised brands -Plaisir and Prudence, the country has surplus stock for condoms up to next year.

“There is no shortage,” said Cyrus Ntaganira, Total Market Approach Manager at SFH. The problem is most likely on retailers who are not buying condoms and this is different from lacking supply.”

Ntaganira told KTPress that some retailers would opt not to stock condoms which at times cause a shortage at a particular place, thus ironing out a likelihood of a national shortage.

The country currently has over 18 brands of condoms with innotex from France at Rwf1000 being the recent to enter the market. However, the most used are Prudence, Plaisir due to their affordability. They are sold at Rwf100-200 and Rwf300 respectively.

In a recent survey conducted by Rwanda Biomedical Centre (RBC), it was indicated that there is a decline in condoms usage mainly in the high risk groups with only 25 percent of those who had casual reporting to have used a condom whilst only 33.1 percent for those who tested HIV positive said they used condoms regularly.

RBC does not relate decline in condom use to shortage of condoms but rather the attitude of people who prefer to have unprotected casual sex. This, however, happens when the high risk group has rather widened if we look at demand in condoms.

According to available figures, demand for condoms in the country increased to 150 million last year, from 130 million in 2014.

The country recorded 132,386,779 male condoms distributed between July 2013 and June 2014, while female condoms which are rarely used amounted to 45,020 condoms in the same period under review.

Dr Sabin Nsanzimana, head of HIV/Aids prevention at RBC told KT Press, “We have seen growth in condom demand. We are looking at reviewing distribution plans to increase accessibility.”

In this context, this year RBC introduced condoms booths around Kigali city in high risk areas which provides free condoms. The government is planning to increase condom use, as one of the measures to reduce new infections by 13 per cent.

Rwanda has the lowest HIV prevalence in the region with prevalence rate contained at 3 per cent, according to Rwanda Demographic Health Survey (DHS) 2015.