The First Lady of Benin Claudine Talon is pursuing her five days official visit to Rwanda where she is taking note of social activities her Rwandan counterpart initiated to improve the well-being of vulnerable communities.

On the third day of the visit, she traveled to Eastern Province to visit several initiatives that benefit women and children.

Both First Ladies-Claudine Talon and Rwanda’s Jeannette Kagame were in Nyamirama Sector, Kayonza district today where Imbuto Foundation – an organization by the First Lady has established a center for Early Childhood Development Center and Family (ECDC&F).

At the center, Imbuto staff strengthen capacities of primary caregivers to provide effective care and stimulating child chances to optimal growth and development.

It has a merit of being an integrated community based model, for cognitive stimulation and school readiness of 0-6 years children.

The two officials and their delegations visited a women opportunity Center, established by Women for Women International, an organization that empowers women.

The center promotes farming skills and financial support to rural women in Kayonza district and neighboring communities. Their tour in eastern province was concluded at the Integrated Development Plan Model Village located at Mukarange sector.

While at a gala dinner yesterday, Benin First Lady Claudine lauded the activities of Imbuto Foundation which she said, inspired her. “The first time I visited Jeannette Kagame’s office, I was impressed and inspired by Imbuto Foundation.

I heard all about it and decided to replicate her initiative in my country. It didn’t work immediately but later in July I succeeded to establish a foundation that supports mothers and children and distributes water to the most vulnerable people,” she said.

The First lady also visited Isange one Stop Center which provides psychosocial, medical and legal services to adult and child survivors of gender based violence and child abuse.

The First Lady visited Kigali Genocide memorial and honoured 250,000 victims of the 1994 Genocide against the Tutsi laid to rest at the memorial.

The visit of the First Lady comes after a three-day visit by Benin President Patrice Talon to Rwanda in August this year.

President Talon promised to his Rwandan counterpart Paul Kagame that the relationship between the two countries would be an example to the rest of Africa.

“We can show that Africans can have meaningful exchanges and also learn from each other,” he said.

“Africans visit the rest of the world but they don’t visit each other. After learning from Rwanda, I have decided that Africans will no longer require visas to enter Benin. My dream is to create a relationship of exchanges and tourism.” 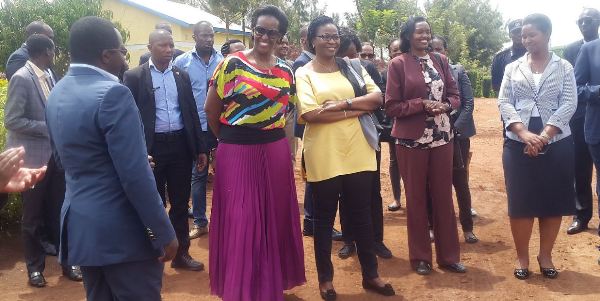