Christmas 2016 is the first of its kind for several categories of poor communities in Rwanda who did not get just food, but what they needed most.

Throughout the year, Good Samaritans kept extending their hand to the poor, giving them food and clothes to mention but a few. Nevertheless, many others took time to think of something memorable to give to the needy families as they end the year.

The 3-bedroom houses are worth a total Rwf 47.3 Million that was raised by RPF members from the province, as part of the party’s policy to ensure social protection for all.

They are equipped with dining and living room furniture, beds and other basic needs in a home,  plus an installed 5,000 cubic meter tank for water harvesting.  They are also connected to electricity.

Marianna Mukabahizi, a Genocide widow aged 65 is one of the beneficiaries from Ngoma District. She told KT Press, “I had never dreamt to live under such a roof. Long live ‘RPF’ and its chairman who has put me in such a confortable shelter where I shall spend the rest of my life.”

“The gesture by members at provincial level is really commendable that RPF members at District level need to replicate it so that all the homeless people in this province get a shelter,” said Judith Kazayire, Governor of Eastern province and chairperson of RPF Inkotanyi in the province. 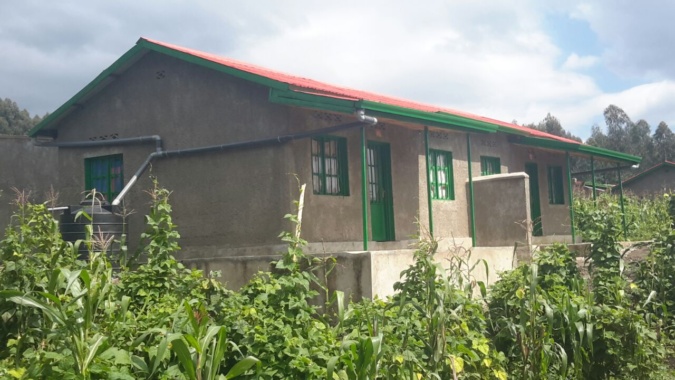 The same day, 200 families from Nyabihu and Musanze Districts of Western and Northern Province respectively were relocated to new/modern houses from high risk zones.

In this program the country intends to shelter over 40,000 households currently residing in swampy areas, steep slopes and other areas that would expose them to calamities.

A model village also called Green Village located in Kabyaza cell of Mukamira sector- Nyabihu District; brings together several residents of Nyabihu and Musanze who enjoy essential social amenities like road, electricity and clean water. Part of the facility is also rain water harvesting tanks and communal cowsheds. The houses were built in vicinity of schools for their children and a health center as well.

“Only God knows how I used to suffer during rainy season; police and army officers used to come to my family rescue as flood wanted to sway us,” said Beatrice Mukanyandwi, mother of eight, one of the beneficiaries.

At a tune of Rwf 1.6 billion, construction of the houses was sponsored by United Nations Environment Program (UNEP) to support the Reducing Vulnerability to Climate Change in North West Rwanda through Community Based Adaptation (RV3CBA).

The project was implemented by the ex-combatants ‘Reserve Forces’.

While traffic rules’ breakers, criminals would think “police is just police anytime,” the men in uniform these festive seasons reminded the general public they also have a sense of humanity.

On December 22nd, National Police in Southern province handed over two houses to two families where daughters in one family were victim of an incest they were forced into by their father, while, in another family, a daughter had been forced into sex by her brother.

The houses are located in Nyamagabe and Kamonyi District respectively and the suspects are in the hands of justice.

The crime was allegedly a result of high density in the families, Community policing chief ACP Celestin Twahirwa told KT Press, “This action intended to increase the bedrooms for these huge families and thus to prevent this crime from happening again.”

At the same time, Twahirwa said, it will guarantee privacy and security to the victims.

The district has started construction of Rwf 600 Million Model village in a system of four in one, to house the 40 families in Mutenderi sector, Mutenderi cell.

“We expect the houses to be ready by July 2017,” Aphrodis Nambaje, the Ngoma district mayor told KT Press.

Besides the houses, other important supports were handed to the needy this Christmas. RwandAir, the national carrier provided Rwf 40 Million worth of equipment to 122 disabled children at “Izere Mubyeyi” center located in Kanombe sector, Kicukiro District.

The equipment includes wheelchairs, crutches and other that will ease children mobility.

John Mirenge, CEO of RwandAir said however much his company is commercial, it always gives back to the community through social activities.

“We are not here to just do the luxurious air transport. We also think about those that are less privileged and need our support whatever small,” he told the Kigali International Airport neighboring community which is most exposed to the noise of RwandAir jets whenever they land or take off.