A reclusive commander of FDLR rebels is finally in Rwanda – despite a campaign launched by Congolese groups fiercely opposing his repatriation or exchange him for Gen Laurent Nkunda, KT Press exclusively reveals.

Brigadier General Comes Semugeshi surfaced uninvited at a UN base in eastern DR Congo last week. UN officials told KT Press then that Gen Semugeshi informed them he was fed up with the “unending lies and empty promises” by his commander in the Conseil National pour le Renouveau et la Democratie (CNRD – Ubwiyunge) – one of the two factions of FDLR.

He had planned his escape for some time – and simply fled to United Nations stabilization mission in DR Congo (Monusco) base in Kitchanga.

Semugeshi had been receiving death threats because his decision to leave the rebel group had become obvious, and it is said his commander General Wilson Irategeka got to know it.

Under normal circumstances, when a member of armed group manages to reach Monusco premises and asks to be repatriated, Monusco proceeds with gathering information on him, and then accompanies him/her to Rwanda.

But when Semugeshi reached Monusco, civil society in Congo went into full gear, demanding that Monusco hand him to DR Congo government “so he can answer for his war crimes”.

Some groups had also started suggesting that he should only be handed to Rwanda in exchange for Gen Laurent Nkunda, a Congolese rebel commander who has lived here for years.

Details of how he reached Rwanda remain unknown, but it is believed he may have been smuggled by Congolese authorities who handed him to their Rwandan counterparts.

Jean Sayinzoga, chair of the Rwanda Demobilization and Reintegration Commission (RDRC) told KT Press today, “He (Semugeshi) is in the country. You can go and interview him in Mutobo.”

Mutobo in Musanze district is country’s demobilization centre. All the ex- combatants spend three months at the centre learning vocational skills and civic education, entrepreneurship and other programs that help them embrace new life.

In Rwanda, Semugeshi’s ancestral home is in Eastern Province (in former Kibungo Prefecture) where his family currently lives.

In 1994, Semugeshi was a senior officer in the Forces Armées Rwandaise (FAR) – Gendarme at a base in Rwamagana and was a student at a senior military officers school, Ecole Supérieure Militaire (ESM), 32nd intake. 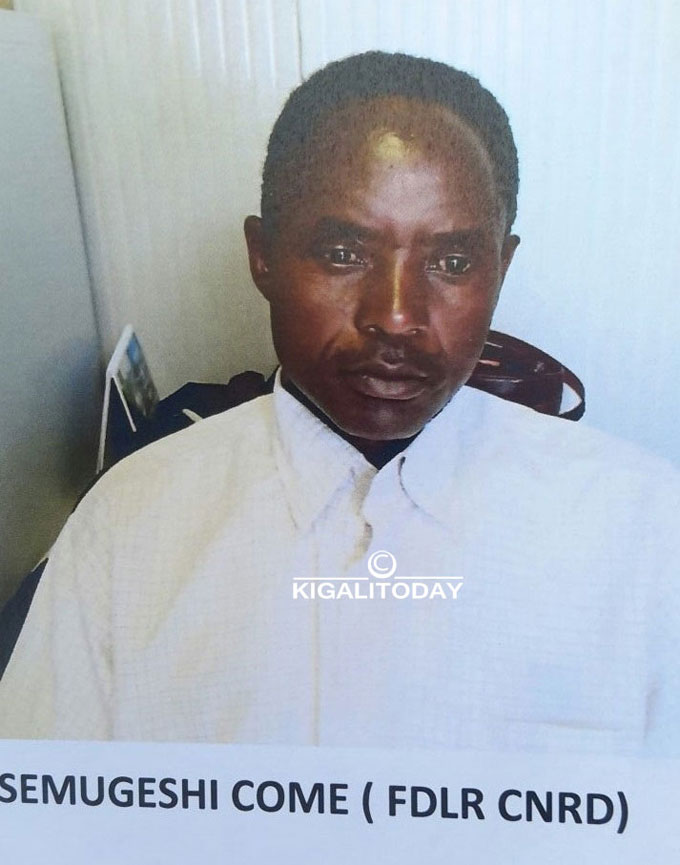