More than 50,000 victims of the 1994 genocide against Tutsi are laid to rest at Murambi Genocide memorial site in Nyamagabe district. They succumbed to extreme cruelty by French soldiers working together with Interahamwe militia with an ultimate objective of wiping out every Tutsi.

During the genocide , Murambi village, Remera cell in Gasaka sector was a place where Interahamwe attacked Tutsi with extreme cruelty and brutality killing them in tens of thousands.

In this place, they killed very many Tutsi, buried them in a huge mass grave and used bulldozers to level the site creating a volleyball court on which they played every day.

Twenty three years later, about 1500 residents of this area have today gathered at Murambi  memorial site in commemoration of the genocide against Tutsi which claimed over a million lives in 100 days across the country.

Prime Minister Anastase Murekezi was guest of honour and was accompanied by Esperance Nyirasafari, the Gender and Family promotion Minister. Mourners first had a guided tour at a massive memorial site that is still undergoing extension works.

Touring this site, mourners sobbed due to seeing the extent of extreme cruelty used by French and Interahamwe militia to kill Tutsi.   After touring the site mourners sang commemoration songs.

Simon Mutangana, one of the only 34 survivors of Murambi massacre took to the microphone to give a wailing testimony of how French soldiers tricked them in plan to exterminate them.

He told mourners that on April 21 at about 3am after 20 days of heavy resistance, the French soldiers arrived in Murambi in company of Interahamwe militias.

This was after former Gikongoro prefect, Laurent Bucyibaruta, told thousands of fleeing Tutsi to come to Murambi in assurance of their safety.

“We had been fighting militias with stones for all this period but we finally got overpowered,” Mutangana told mourners amid screams of traumatic mourners. Memories are still fresh among those who survived Murambi massacres.

According to Mutangana, Interahamwe, with support of French soldiers, threw grenades at them. “Many people died and others were seriously injured,” he said.

This was the start of heavy killings, Mutangana told mourners. He remembers that Later on the day of attack, French came and ferried Interahamwe militia to give more killing support in Cyanika – a nearby area.

The day’s mission was to exterminate children. As all this happened, Mutangana said, “French soldiers were leading the militia to dig mass graves with caterpillars. They threw dead bodies and those still alive in graves,” Mutangana said.

Mutangana’s testimony is among several horrifying accounts of victims that witnessed the gruesome attacks by French soldiers and Interahamwe militia.

Prime Minsiter Murekezi was over powered by emotions and broke down to his knees as he laid a wreath on the tiled grave in which over 50,000 victims are buried.

According to a guide at the memorial, in 1994, French soldiers brought in heavy equipment to dig several pits where many thousands of bodies were placed.

They then placed a volleyball court over the mass graves in an attempt to hide what happened. Among the bodies currently displayed are many children. 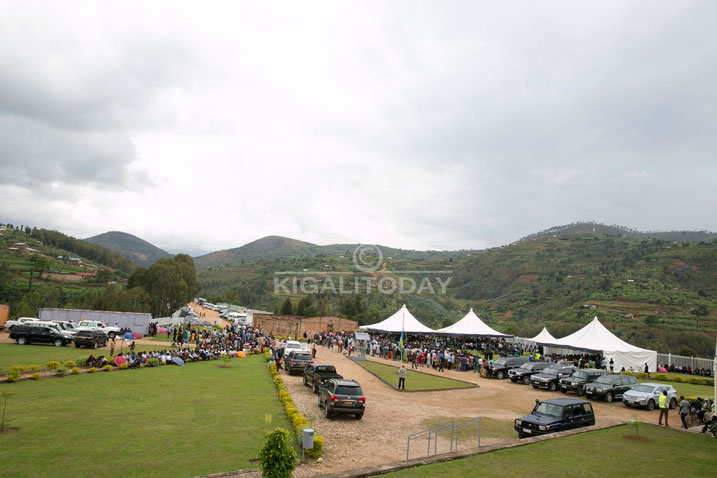 France’s role in the Genocide Against Tutsi

The Prime Minister, said the French actively killed Rwandans and their role is seen everywhere.

“The role of France in the Genocide can be seen at Murambi and other memorials nationwide,” said Prime Minister.

Recalling the genesis what befell Rwanda in 1994, the Prime Minister told mourners that; “The Genocide against Tutsi was a result of bad politics from colonial era to the 1st and 2nd Republic.”

He reiterated that those who played a role in the Genocide must be brought to justice for their deeds.

Murekezi however, reminded Rwandans to visit Genocide memorials to ensure that what happened never happens again. He directed officials at the National Commission for the Fight against Genocide (CNLG) to speed up rehabilitation works at the site to meet UNESCO standards.

Meanwhile, the Prime Minister paid tribute to Jerome Masinzo – a former priest and leader of Butare Diocese since 1988.

During the Genocide, he led Ngoma Parish. He survived the killings by hiding in a cupboard inside Ngoma Catholic Church.

The now 60-year-old farmer, Masinzo was decorated with a medal for exhibiting high level of humanity.