Rwanda Dissidents Pay $440,000 for Hearing in US Congress 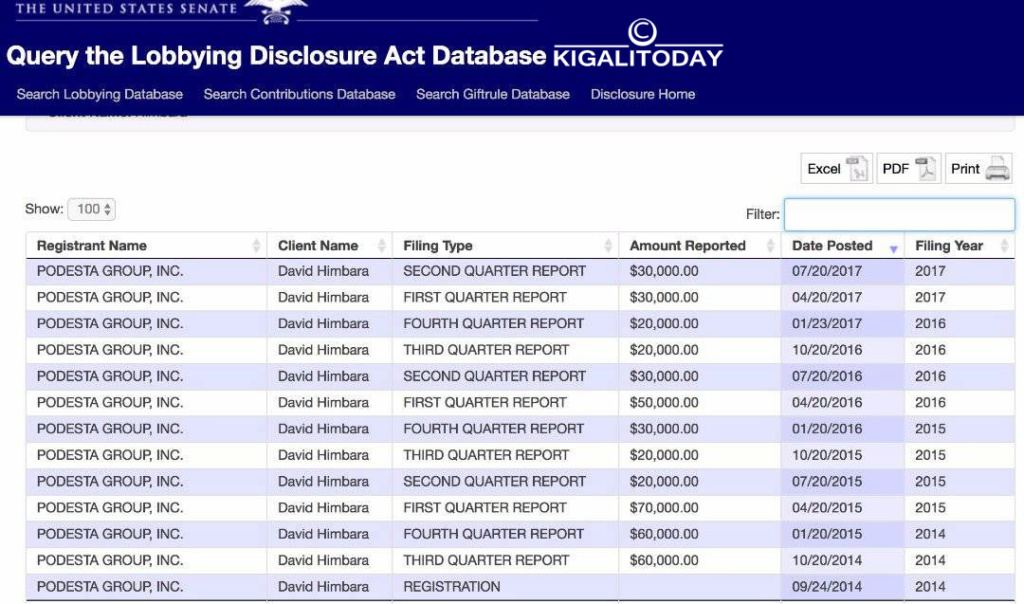 A Rwandan tycoon has paid tens of thousands of dollars to a US firm to lobby for access to American lawmakers to plead his case.

Businessman Tribert Ayabatwa Rujugiro, through Dr. David Himbara a senior member of the Rwanda National Congress (RNC) – a grouping of Rwandan dissidents, has been paying lobbying fees in various amounts to the Podesta Group, a lobby firm.

In return, the firm has provided access for Himbara and team to Congressman Chris Smith, chair of House foreign affairs sub committee on Africa.

In addition, the Podesta Group also produced a promotional video featuring Rujugiro and Himbara. The video was for airing on select US media but it is unclear whether it did pass. So far, it is posted on the Podesta Group website.

As a result of the cash payments, tomorrow on Wednesday, Himbara will appear before Congressman Chris Smith sub committee.

In similar previous sessions, whose decisions are non-binding, Himbara rambles about the government in Rwanda.

Himbara will appear along with dissident soldier Maj. Robert Higiro. He was dismissed from the Rwanda Defense Forces (RDF) years ago over gross misconduct but fled the country before his case could be heard. He re-branded himself as a political opponent of the Rwandan leadership.

As for Tribert Rujugiro, he was a wealthy businessman in Rwanda until his 2008 arrest in the UK over tax evasion cases. He was also wanted in South Africa over same cases emanating from his cigarette empire.  Rujugiro was later released after agreeing to pay a $7.1m (£4.6m) fine to the UK tax body.

As recently as July 20th, lobbying payment declarations required by US law, show that Rujugiro transferred some $30,000 to the Podesta Group. The same amount was paid to the firm on April 20th. Payments were made at different times in 2016 and 2015.

As per the lobby declarations, the firm pays out the cash for access to Congressman Chris Smith and other committee colleagues.

US law requires that all cash that lobbyists on Capitol Hill (seat of US Congress) get to provide way into the offices of lawmakers, must be kept on publicly accessible platform.

Rujugiro has declared in various media interviews,  especially the Voice of America (VOA) radio, of his determination to forcefully change government in Rwanda.

The cigarette businessman is particularly bitter that Rwanda did not intervene when his tax evasion cases arose in the UK and South Africa.

Himbara for his part identifies himself as coordinator of “Democracy in Rwanda Now” outfit. Publicly, he has never been admitted as a member of RNC but details published in Rwandan media since last week and a police criminal dossier of the so called Rwigara family shows otherwise.

The “Rwigaras” as they have come to be known, is family of deceased businessman Assinapol Rwigara.

One of his children Diane Rwigara tried to take part in August presidential polls, but was eliminated by the electoral commission after her nomination papers were found to have names of dead people.

Until the WhatsApp messages leaked, there has only been public speculation over links between RNC and the Rwigaras.