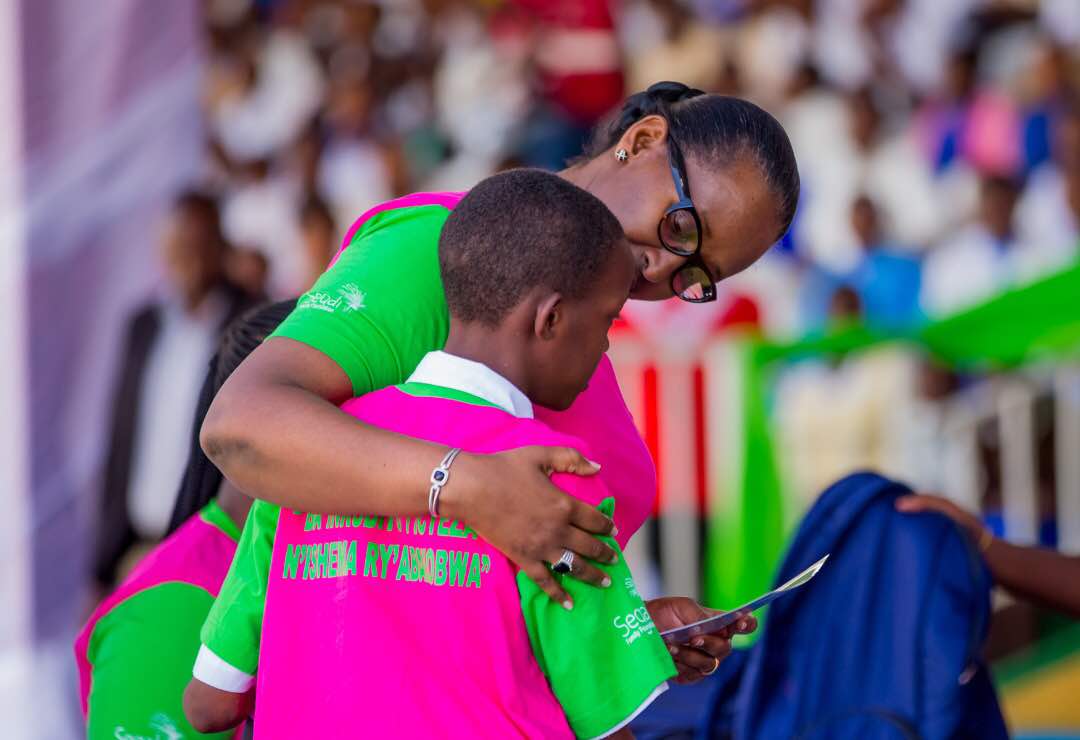 First Lady and Chairperson of Imbuto Foundation, Mrs Jeannette Kagame congratulates a Best Performing Girl (BPG) during the closing ceremony of the 13th annual Promotion of Girls’ Education Campaign, which was held in Nyamagabe District.

The first Lady of Rwanda Jeannette Kagame has appealed to educators, parents and partners to spare no effort to have girls passing national exams with excellence from all parts of the country.

For close to two decades, Mrs Kagame awards the best performing girls in National exams from Primary to Advanced Level through the Promotion of Girls Education Campaign.

During a similar event in Nyamagabe district on March 27th, the First Lady shared performance records of the girl for the last five years and said, there is still a long way to go.

“There is still a long way to go; let’s commit to have at least one girl in division 1 in all sectors of the country next year.”

The First Lady is thankful that, the number of girls embracing some courses the country is promoting, like technical and vocational program is improving.

However she is still concerned that the girls taking up science courses is still wanting. 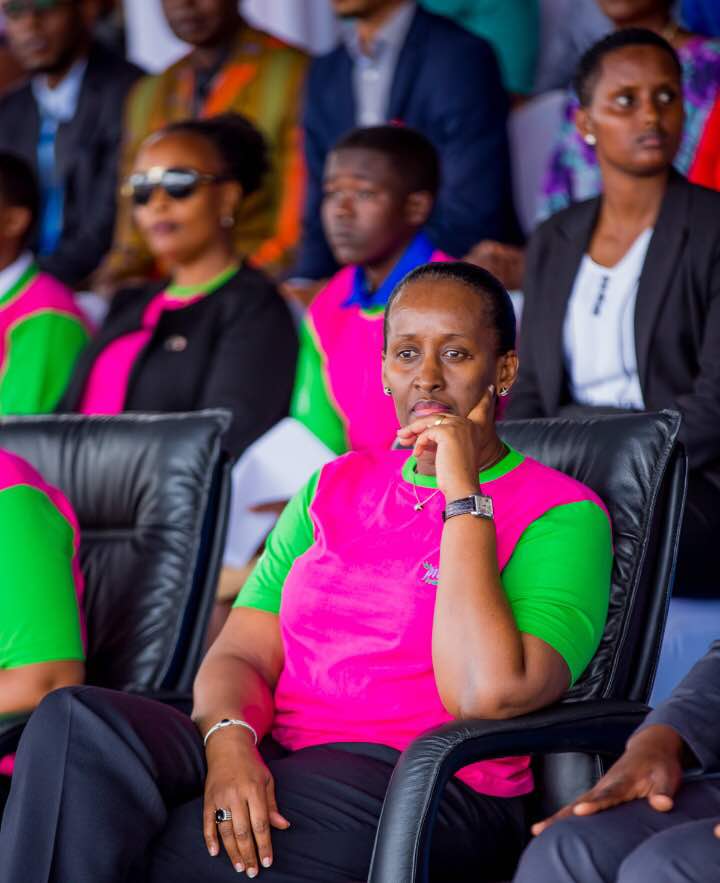 First Lady Jeannette Kagame during the 13th annual Promotion of Girls’ Education Campaign, which has seen 4,700 girls being rewarded for their high academic achievements.

She quoted latest figures from the Ministry of Education whereby the number of girls graduating in Science programs increased to 55% in 2015 from 48% of all the girls in school in 2011.

“You can see that we still have a long way to go,” the First Lady said.

Mrs. Jeannette Kagame has a tip to improve these scenarios; starting very early to empower them through the Early Childhood Development, a program which the First Lady is also promoting.

It is that way, she said, that Rwanda will have science gurus. 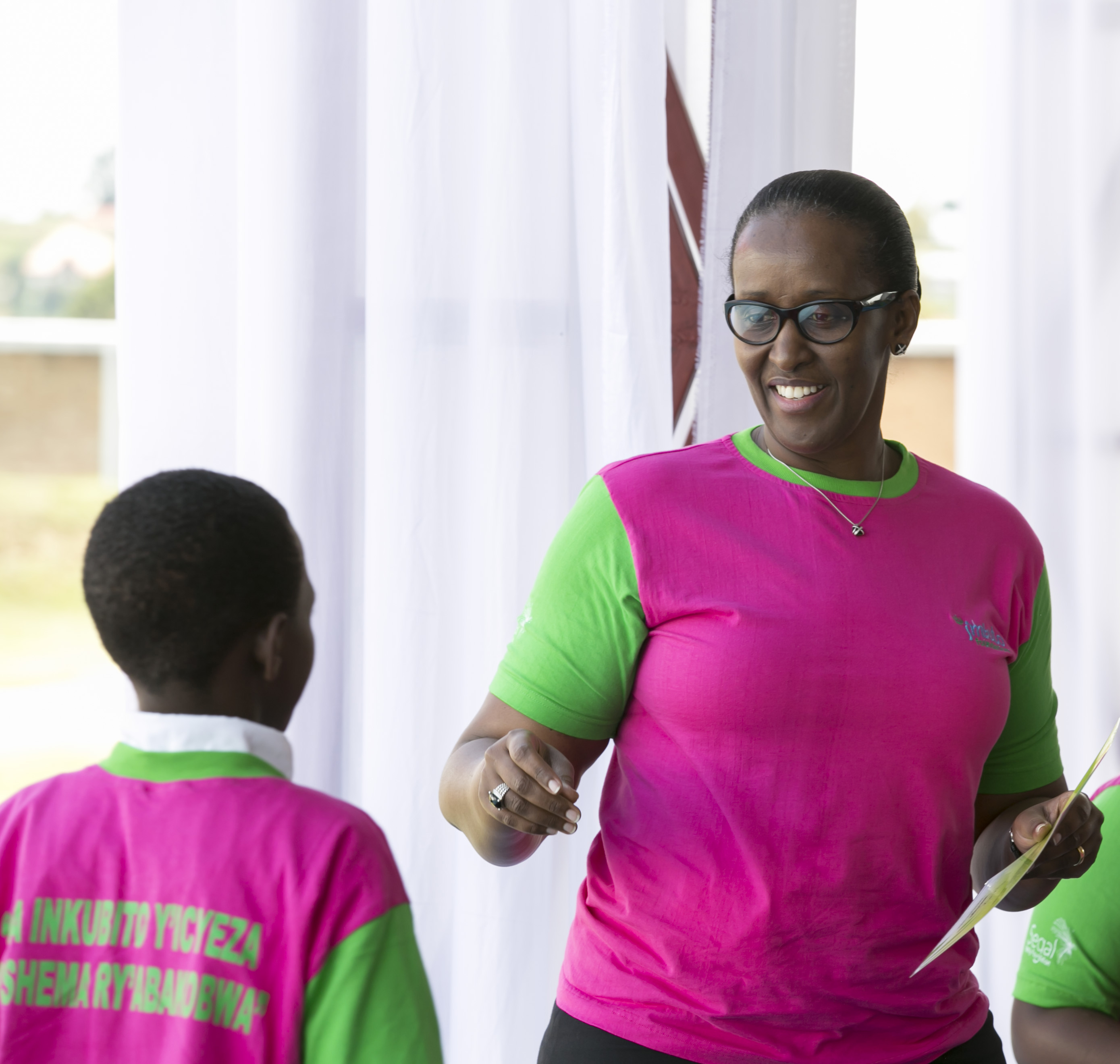 The Chairperson of Imbuto Foundation shares a moment with one of the 82 Best Performing Girls, who were rewarded at the closing ceremony of the 13th annual Promotion of Girls Education Campaign.

To the parents, the First Lady said they should also watch out and see whether there are no other reasons that impede child girl school performance and sort them out.

However, children themselves have a role to play for their own good.

She told them to “add knowledge to critical thinking, the thinking that makes impact in the society.”

Awardees Get a Foundation

Imbuto Foundation is an organization devoted to uplifting the lives of vulnerable populations in Rwanda, and in particular those of widows, orphans of the Genocide and impoverished families.

This year’s Promotion of Girls Education Campaign by Imbuto Foundation started in Muhanga district in February where 79 students were awarded. The campaign proceeded in Gakenke district on March 26th with the awarding of 80.

At A-level, awardees were given a Laptops and ICT Training packages to ease their transition to university.

Honorine Mizero who completed advanced level at Gashora Girls Academy in Bugesera district was rewarded in Gakenke after passing with 73 points the national exams in her combination in PCB/M (Physics, Chemistry, Biology and Mathematics).

She dreams of being Professional Dentist after getting an admission at Yildrim Beyazit University located in Ankara City in Turkey.

“I will leave for Turkey in September. I am very excited that the First Lady has given me such an executive award. It will push me much further,” she told KT Press.

In Nyamagabe district, Ananias Bigenimana who graduated from Senior Six at Lcee de Kigali was also excited to get the Imbuto reward for the third time.

“It is really exciting to get a reward from the First Lady. I am very thankful,” he said.

According to Imbuto Foundation Director General Umutoni Sandrine, one girl is selected per sector at the primary level, one girl per district at the Ordinary level and one girl per province at the Senior Six level.

Since the inception of Imbuto Foundation in 2005, over 4,600 girls were rewarded for their academic performance.

The First Lady thanked partners for supporting this initiative. They include the government of Rwanda, Segal Foundation, Rwanda’s Ministry of Gender and Family Promotion, Rwanda Development Board, Workforce Development Authority (WDA) and the Rwanda Education Board (REB), to mention but a few.

We Should Never Allow Anyone to Suffocate Us – Kagame