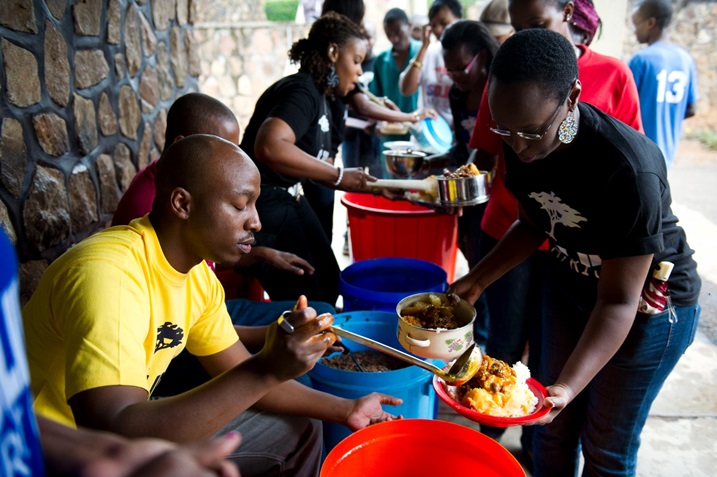 In 2006, Felix Nshimyumuremyi went to Kigali University Teaching Hospital (CHUK) to visit a relative who was involved in an accident, but when he arrived he found out that the patient was already discharged.

Nshimyumuremyi immediately looked around for patients in the same room to tell them a comforting word.

In the process, he identified two neediest patients who did not have caretakers. He served them the meal he had brought for his relative.

This opened Nshimyumuremyi’s eye. He understood that some patients starve at the hospital while outside, families waste food.

At that time, he was working as a houseboy in Muhima – a suburb in Nyarugenge district in the capital Kigali.

On his way back home, he took a firm decision to return regularly to the hospital to check on patients and help them with whatever means he would afford.

“I begged my mistress to give me at least a meal for one patient once every week,” he said.

“I was very fortunate that she supported the idea. She allowed me to have a meal for three patients every week and, on top of that, committed to pay me transport to the hospital.”

The more Nshimyumuremyi visited the patients in several departments, the more he realized that they needed more than just food.

For instance, patients affected with HIV/AIDS were being stigmatized at such an extent that even their relatives “had abandoned them to die at the hospital.”

Nshimyumuremyi was obliged to introduce a new service; to wash clothes for patients and provide barber services, among others.

Currently a taxi operator and father of two, Nshimyumuremyi still goes to CHUK for charity activities where he mostly caters for hygiene needs.

“With growing family responsibilities, I now go there every Saturday and for example, provide barber services to at least 20 patients. At any occasion, I afford little money for basic needs for a couple of patients,” he said.

Nshimyumuremyi is no longer alone in this charity drive. 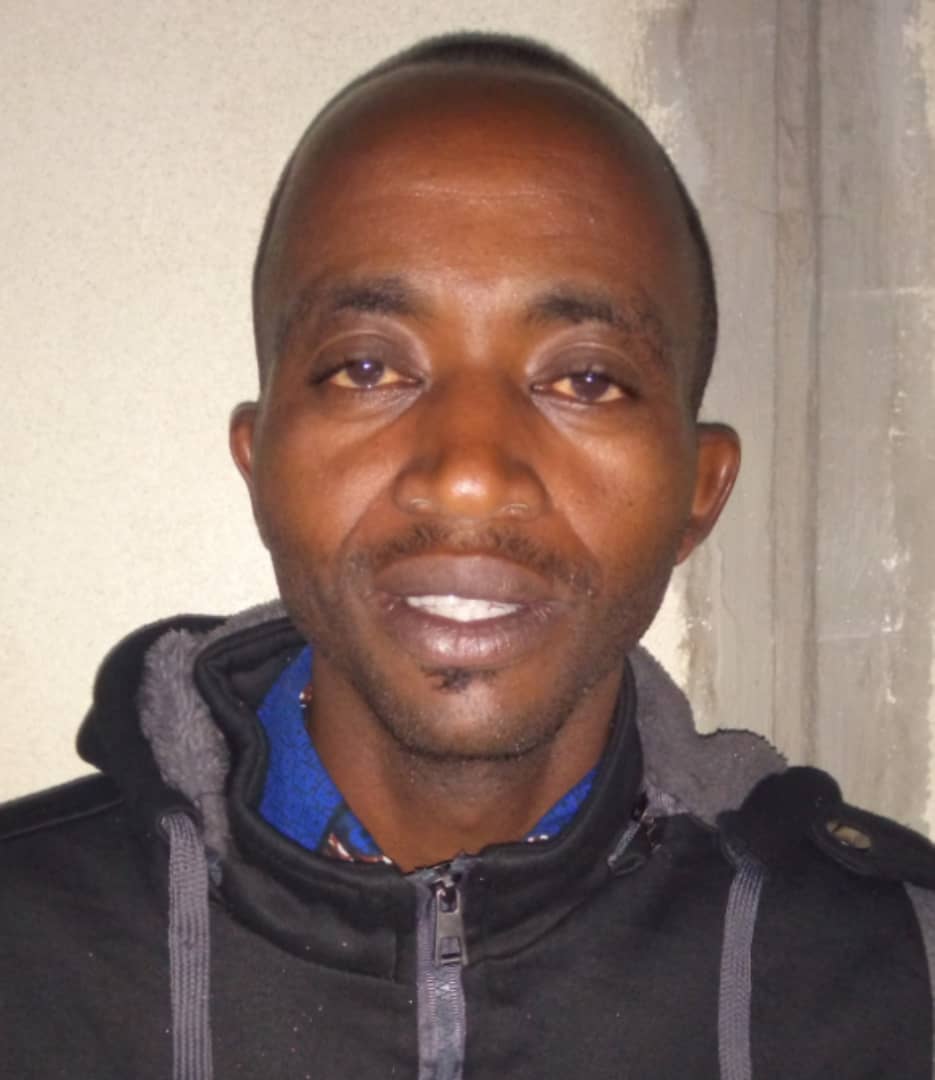 Felix Nshimyumuremyi, another philanthropist of CHUK

Many people have joined the cause, to an extent that CHUK was obliged to put in place a committee to manage philanthropists.

They come individually or organize themselves into associations.

Their intervention varies from food supply, hygiene, paying medical costs and the package comes with prayers in most cases.

For Pascasie Mukanyangenzi, another resident of Kigali who runs a hair saloon, an inspiration came from her church where the pastor encouraged Christians to “do something to help the needy in the Kingdom of God.”

Her mind directed her to the hospital where she started with three colleagues to take ready meals. They grew to become a group of 40 people, all cooking meal from home and meeting at the hospital for their action to make a visible impact at once.

Currently, the group prepares 50 kg of Irish potatoes, 6kg of green bananas, a variety of vegetables and meat.

Apart from individual people who organize themselves in associations, it has reached a point where well-wishers create nonprofit organizations for patients’ support.

With a humble beginning of supplying a couple of patients, Isabelle Kamariza, founded ‘Solid’ Africa – a charity organization with 5 initiatives oriented to supporting hundreds of needy patients, including a meal per day for 400 needy patients at CHUK.

In 2010, she met a one Maman Zuzu – a woman with a compassionate heart, who was offering a meal to just two patients every day at CHUK.

“She encouraged me to join her to offer the little we could afford and most importantly, to pray for the sick,” she says while narrating her humble beginning.

Kamariza who had graduated with a degree in law joined Mama Zuzu and together, they continued to pray and offer a few meals to patients.

The organization feeds these patients from their six hectares of land where they grow some vegetables, fruits, bananas and other crops.

Solid Africa has partnered with Minimex – a maize flour processing factory in Kigali to widen their food supply.

On top of Minimex’s maize flour, Solid Africa shop other items from the market.

While Solid Africa has seven volunteers who would prepare the meal from their homes and carry it to the hospital, in June this year, it launched construction of an industrial kitchen meant to supply over 15,000 free nutritious meals to patients in six referral hospitals within Kigali city.

“Our focus is patients in the first and second categories of Ubudehe-the poorest people in the community,” Kamariza told KT Press.

Officials at CHUK watch as well wishers feed the patients or provide them with any support. With time, they realized the need to organize them.

“Before 2008, five different associations and churches could meet in one sickroom, so we helped them create an association with a management committee which works hand in hand with the hospital’s social department,” Dr. Theobald Hategikamana, Director General of CHUK, told KT Press.

His office has registered one hundred associations, including churches and other institutions that regularly carry food to the hospital for needy patients. 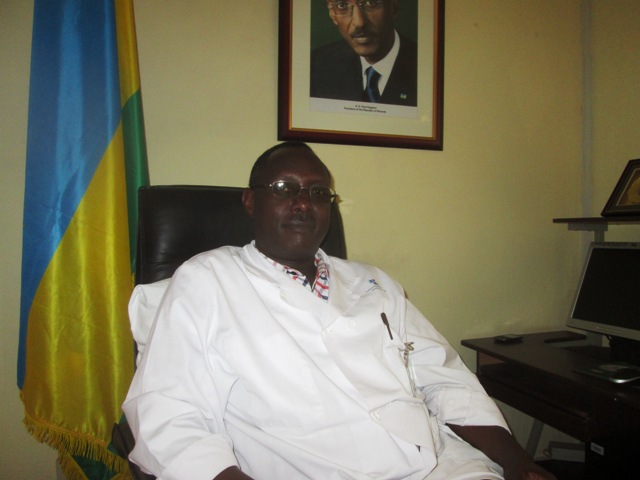 CHUK is the main referral hospital and one stop center for all severe cases from across the country. Hundreds of patients and their caretaker arrive in this facility of the relatively expensive capital city without any support whatsoever. Philanthropists play a vital role in supporting them.

“When you bring food, the management committee together with social workers guide you to the room where you should take the food,” Hategekimana said.

“We are very lucky. Sometimes I wonder how these patients survive in hospitals that do not have these compassionate people who take care of vulnerable patients,” he said adding that by supporting the patients, they help the hospital achieve its mission.

“Giving them food makes it easier for patients to quickly recover and go back home,” Hategekimana said.

“We can’t thank them enough.”

We Need Them Too – Countryside Hospitals

While CHUK is doing well, hospitals upcountry are also thankful to the well-wishers, though they still need more.

Kalisa Claude, Social Worker at Rwamagana District, told KT Press that the hospital also has benefactors caring for the sick.

He said that they have two groups of religious philanthropists who bring food on a regular basis.

When these benefactors take food to the hospital, they give it to the social services department which distributes to the needy patients.

“They are very passionate men and women. We are very thankful to the service. The hospital need more support though,” Kalisa vividly confessed to KT Press.

Dr Utumatwishima, for example, says in March this year, Rwf 1 million was deposited on this account.

On top of this, food and sanitary items worth Rwf 700,000 were also donated.

He said the hospital has a large number of people caring for the sick, including One Love, a group of journalists and youth from Musanze Town.

Religious groups of Muslims and Christians also contribute, all in an organized manner, to make sure that they can serve the maximum possible.

“A giving heart is never small, we value much the support given to our patients,” Dr Utumatwishima said, asking all these benefactors to join hands and funds and build a strong social service which could care for more needy patients in a sustainable way.