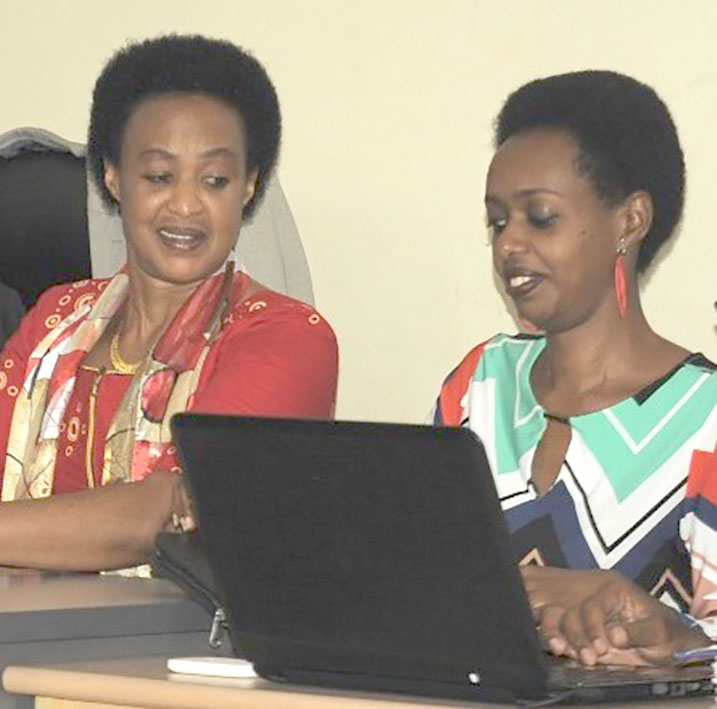 Prosecution has requested for a 22-year jail sentence for Mukangemanyi Rwigara and her daughter Diane Rwigara.

Recently released on bail, the Rwigaras appeared before court to battle a case of inciting insurrection and sectarianism among others on Wednesday.

During the hearing Prosecution requested that Mukangemanyi be convicted for crimes of sectarianism and with her co-accused be convicted of inciting the public.

The prosecutor also asked for 22 years for Mukangemanyi and a fine of Rwf1 million and 15 years for her co-accused.

For Diane Rwigara, prosecution demands for 22 years and a fine of Rwf3 million.

Shima and Mukangemanyi were released on bail on October 5 this year after the High Court ruled that there are no circumstances for provisional detention.

Appearing in High Court without their four co-accused, the suspects denied all allegations.

Mukangemanyi who was holding two bibles in the right hand which she would raise from time to time gave detailed background of her family and her husband Assinapol Rwigara.

“He was subjected to injustices. He had been harassed since 1995 until his death in 2015,” Mukangemanyi told court.

Adeline Mukangemanyi said that for the court to understand her case, she has to give the chronology of events her family has been going through.
However, the Judge asked how these incidents relate to the charges.

In her response, Rwigara said they are all connected “since they root from my husband’s death.”

Refuting prosecution allegations, she said that she does not have power to incite the masses.

“How can I incite masses against the government? What power do I have to do that? I only spoke out about my pain,” she said.

Mukangemanyi’s lawyer Gatera Gashabana challenged the evidence that was presented by prosecution against his client.

The lawyer also gave credit to his client’s submission that they were only “relating to the agony the family was experiencing after the death of Assinapol Rwigara.”

“From the audios, you sense that this is someone who is yet to overcome the loss of her husband. There is nothing pointing towards inciting masses against the government but you rather feel someone expressing her pain. These are moral grounds the Judge should consider,” Gashabana argued.

On her side, Shima Rwigara told court that she had counter allegations evidence.

On the allegations of inciting the masses, she said whatever she said in a press conference which constituted one of the basis of the allegations, “was based on media reports, such as the World Bank report especially on the state of Rwanda’s economy.”

She also quoted other “credible publications” to defend herself in regard to her claim that country wealth is concentrated in the hands of a few Rwandans to which court asked her to present such proof.

On the charges of forgery, Diane Rwigara said they were fabricated – insisting they were “stage managed in order to block my candidacy.”

On her remarks that the National Electoral Commission is like any other institution used by government, Diane Rwigara, in a sharp tone, said “it is true that the Electoral body works in favor of the government, unless it’s not a government institution.”

On another charge of forged signatures obtained from the deceased, Diane Rwigara vehemently denied it.

“They started with accusations of 3 dead people who signed for me but in the file it is one person,” she said.

At the hearing, prosecution submitted that, “For Diane to have publicly expressed her feelings through media outlets, she committed a crime that is punishable under the law.”

The prosecutor added “This was clearly intended to address the public. Journalists represent the public.”

He also asked that legal action be taken against Diane.

“I am requesting judges to look into Diane’s misconduct while I am talking. She’s whispering and I want to remind you that there are crimes committed in courtrooms.”

The prosecutor then asked Diane Rwigara to apologise for everything she said.

On Adeline Rwigara’s claims that there were no investigations into the death of her husband, Prosecutor insisted: “Investigations were done and completed.”

The hearing in this case will resume on December 6,2018 at 2pm (Rwandan time).