Ebola Threat: No Hugs, Thank You – Church to Christians in Western Rwanda 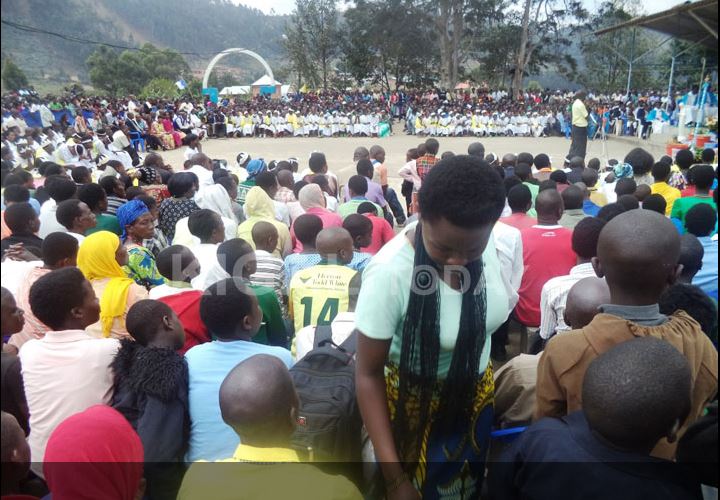 C:\Users\USER\Desktop\Nyundo christians in a past event

Devout Roman Catholics in Rwanda’s western province district of Rubavu have been advised not to do the customary hug whenever they are greeting and wishing each other peace in a bid to avoid possible contraction of the deadly Ebola virus.

The traditional greeting “May the Peace of Christ be with you” followed by a hug is a common practice among members of the Roman Catholic Church in Rwanda, with at least 57 per cent of the country’s population catholic.

However, the Faithful of Roman Catholic Diocese of Nyundo, in Rubavu district will not be able to hug or shake hands after they were advised to avoid any unnecessary contact as a precaution.

Though Rwanda is yet to register a case of Ebola since the outbreak in Eastern Democratic Republic of Congo (DRC) last year, Rwandan authorities and partners are on the alert to keep the deadly virus at bay following the emergency of cases in the town of Goma which borders Rwanda.

On Monday, Government officials including the Minister of Local Government Prof. Anastase Shyaka and the Minister of Health Dr Diane Gashumba were in Rubavu district to create more awareness and intensify preventive measures and vigilance against Ebola which has so far claimed over 1,500 people in DRC since its most recent outbreak over a year ago.

During the meeting, the deputy monsignor of Nyundo Diocese, Fr. Jean Marie Vianey Nsengumuremyi urged the faithful to avoid engaging in unnecessary body contact as a precaution measure, including avoiding the traditional greeting which involves hugging or other forms of body contact, instead encouraging them to bow or wave.

“There is a lot we can do as we have discussed in this meeting, what remains is implementation. For example I can confirm that during Holy Communion practice, there is a risk of exposure involved when we do it directly to your tongues or mouth. If we stopped celebrating the Eucharist as we do it now, you would understand why,” the cleric said.

“I also want to advise you to bow or wave as you wish each other the peace of Christ, instead of hugging or shaking hands with people you are not sure of. This is something you can understand as well,” Nsengumuremyi added.

The clergyman said that they will include awareness messages in the sermons, including encouraging to people to travel to neighbouring DRC when necessary or entirely avoid crossing over until the situation stabilizes.

He advised citizens to not frequent DRC, even though during the meeting citizens expressed their concerns of not going to DRC at all –something that would curtail their lives which mainly depend on cross border trade.

At least 57 per cent of Rwandans are Roman Catholics. Fr Nsengumuremyi’s advice has triggered a wave of interesting comments and jokes as Rwanda continues to be on the alert to avert any possible Ebola outbreak.

During the meeting with opinion leaders, the business community and local leaders, the Local Government Minister advised Rubavu residents to exercise caution, including avoiding going to DR Congo, even though it is a source of their livelihoods.

“Prevention is better than cure. There is no reason to cross over when it is not necessary or important. All the services you go to get across can be obtained here. There is nothing more important that can take you across the border well knowing the danger involved,” Prof Shyaka advised the gathering.

The border between Rwanda and DRC remains open despite two people so far dying of Ebola in the sprawling town of Goma which straddles the border with Rwanda. Preventive and detection measures have been intensified along the border which normally has daily traffic averaging 100, 000 people.

Prof. Shyaka and Dr Gashumba visited the facilities established along the border to help prevent the deadly virus from spreading across the border.

Who are Eligible Investors to Take up Rwanda’s Seashore Land in Djibouti?