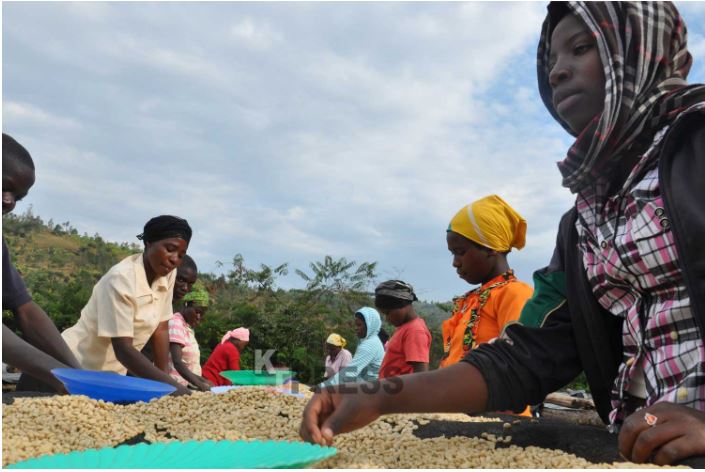 Rwanda’s National Agricultural Export Development Board (NAEB) has set a target of collecting $95million from coffee export revenues by 2024 from $68million last year.

This new coffee export revenue target represents an increase of $27million compared to the earning in the last fiscal year (2018/2019).

New coffee export revenues targets were announced during the campaign to encourage youth engagement in the coffee value chain including, farming, processing, and marketing.

“Most of the players in coffee sectors are elderly people; this means the country is risking future low production and export revenues because time will reach when elders will be unable to grow coffee,” Isaa Nkurunziza, Traditional Commodities Division Manager at NAEB said.

“This is a national wide campaign, youth are called upon to join different departments in the coffee value chain, in growing coffee, marketing, and processing.”

The youth engagement campaign held in Kigali city on Thursday 20 follows research indicating that people involved in the coffee value chain mostly growing coffee are elderly people ranging from 50-60 years. The research conducted by NAEB was released in 2015.

Francis Kayiranga, a representative of Muhondo coffee company in Gakenke district said, “We are aging, but the country will still need coffee export revenues and even for the local consumption. The best way to plan for the future is by encouraging youth to engage in coffee growing.”

“Growing coffee does not mean you need to go back to the village for those who live in towns; you can plant coffee trees and become a weekly visitor to the garden or even employ people. If some youth do not want farming, they can venture in the marketing of coffee or coffee processing,” Kayiranga said.

To engage youth in the coffee value chain, Muhondo coffee company organized football tournaments with the aim of organizing youth and passing the message of engagement in coffee growing in Gakenke district, Northern province.

So far, Muhondo has over 140 youth who grow coffee in their parent’s gardens and 300 eleders who are above 50 years old, according to Kayiranga.

According to NAEB, several campaigns will be held across the country through coffee task force events, the exercise that aims at improving the quality of coffee, farmer’s general assemblies and several other sports competitions.

The campaign to engage youth in the coffee value chain was organized by NAEB and Agriterra, a non- governmental organization founded by farmers in the Netherlands in 1997.

“In our ‘Farmers Fighting Poverty’ program for 2016-2020 in the Netherlands, youth is one of the focus points.”Jasper Spikker, Country Representative of Agriterra said.

“We are glad that Rwandan coffee cooperatives are aware that if they want to safeguard their achievements from the past, investment in the farmers of the future is key and these are youth,” Spikker said.

The fluctuation of coffee export revenues was caused by fluctuating international prices and volumes. For example in 2017 exported coffee volumes dropped to 17.2million kilograms from 17.39 kilograms.

To increase coffee production and revenues, the government is eyeing youth as the main player in the coffee value chain.

“Without youth involvement in the coffee value chain, but mostly growing coffee, we have no coffee in the nearby future,” Nkurunziza said.

The projection of future decrease in coffee production and revenues comes at the time, Rwanda target earning $1billion agro-exports revenues by 2024. Available figures from the Ministry of Agriculture indicate that over $465million was earned from agriculture export revenues in 2018.