We Will Never Compromise On Accountability- Minister Busingye 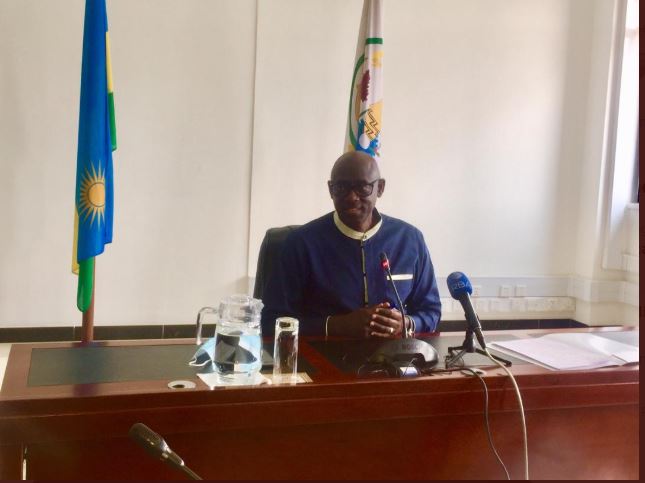 The Government of Rwanda will do everything it takes to ensure that public resources are accounted for, regardless of the status of whoever is involved in misusing taxpayer’s money -big or small.

This was said by the Minister of Justice and Attorney General Johnston Busingye on Wednesday, firing a warning to everyone involved in the mismanagement of public resources, that the law will catch up with them, sooner than later.

The notice follows a new momentum triggered by President Paul Kagame recently when he scathed members of the government and those of the ruling party for condoning lack of transparency and failing to act when scarce resources are misused by individuals who should protect them.

Minister Busingye, who was among the officials on the spotlight during the Rwanda Patriotic Front (RPF-Inkotanyi) extended National Executive Committee (NEC) meeting on June 26, said that what happened in Rusororo shouldn’t have come as a surprise to many because ‘RPF and accountability mean the same thing’.

“The RPF and accountability mean the same thing. One of the pillars that the RPF has built itself on, that define it, is accountability, both from within its own members and its own leaders,” Busingye said, adding that everybody within the party ranks and those it serves is expected to observe the rules and play by them.

He said that being accountable within RPF goes beyond just resources but also actions especially if you are given responsibilities as a leader.

“If I am a Minister of Justice and I belong to the RPF, I account for the job I do and if I don’t do that, that is a failure on my part as a member of government,” Busingye said, adding that the last RPF meeting is one of the many in which the party goes into a retreat to question its own members and hold them accountable.

He said that the last meeting, which is the most recent and will not be the last, is one of the gatherings in which the party convenes its own members, puts the foot on the ground and demands accountability from them, as a principle within the party. No stone is left unturned.

“It is basically a value that we, as RPF members, must observe. It is a value the RPF as a political organization survives by, lives by and observes. The reason it does that is simple,”

“If you are a political organization in the business of managing people or a population, taking them from one place to another, they must have trust in you,” Busingye said, adding that one of the things that will make people trust you or lose trust in you is how accountable you are to them.

Busingye said that accountability has been one of the key tenets of RPF since its founding in December 1987, to date and there should be no surprises if its members or senior officials are held accountable to the penny.

On leaders being held accountable

Following the meeting in Rusororo, during which President Kagame, who is also the party chairman, made senior officials stand up and answer questions, several high-ranking officials were summoned by the Rwanda Investigation Bureau (RIB) to answer questions regarding misuse of public resources.

The Attorney General said that it should be normal for senior officials to be investigated or questioned in line with holding them accountable, something he said is purposely aimed at safeguarding public resources.

“Leadership is also a mission that people are entrusted with to go and deliver and one of the things that need to be observed seriously is that when you are in power, the trappings of power, the temptation to abuse, might come,”

“And if that invitation to abuse the power, to abuse the office, to put your hand in the till, if that suggestion comes, you ought to resist it. Pray to God to resist but if you can’t, then you will be held accountable. There are no two ways about it,”

“If you go back to the history of this country and the journey of our country, you will keep finding that there are senior people, who fell by the wayside, just because of accountability issues,” he said.

Busingye said that most of the senior officials who failed the accountability test ended up in exile and created political organisations, purportedly fighting the current government but they also know the truth.

He said the majority of those served in political leadership, military or diplomatic ranks and eventually fell out of favour, ended up where they are for failing to be accountable.

“This is something, unfortunately, that the RPF would not compromise on because if you compromise on this then you’re failing on your major mission of organizing and managing the population,” Busingye said.

Busingye however did not mention specific names of officials currently under investigation but said that the investigating body, the public prosecutor and the courts will do their work to ensure that everyone with questions to answer is made to answer.

He pointed out that nobody is immune to government efforts to seek accountability, pointing out that even he himself, if there is legitimate suspicion that as the Justice Minister, he connived to cheat the government, or issued a bounced cheque or defrauded money through procurement, then he will be held accountable.

Regarding ongoing investigations, Busingye pointed out that there will be ‘no sacred cows’ -everyone will be held accountable.

“There is nobody above the law that you will find. It will be about evidence, it will be about having evidence that leads to abuse of office,” Busingye said.

A recount of the Rusororo meeting

Busingye spoke about the events in Rusororo, pointing out that names were named and people were made to stand up and defend themselves against the accusations, pointing out that it is how the RPF works and it will continue to do so.

He said that President Kagame, who is the head of RPF said that there is a concerning level of lack of accountability among the senior members of the party and wanted them to be responsible and answerable because he himself as the President is answerable to the people.

“He wanted to expose them and say look, you must carry your burden. If you did it, you must carry the burden yourself, you did it on your own,” Busingye said, adding however that such incidents have happened many times and that he has no doubt that it will continue to happen.

“They told you that I was also made to stand. Yes, I was made to stand. I am the Minister for Justice and the Attorney General and the President wanted me, first of all to know that this is a concern and acknowledge that it is a concern,”.

“It’s a concern for Rwandans.  When we have issues like this where else do we go? We go to Justice,” he said, pointing out that he was being reminded to do his work and give the issues raised proper and deserved treatment.

Several officials including the Minister of Infrastructure, Claver Gatete, were put on the spot, with President Kagame directing RIB to thoroughly investigate them.