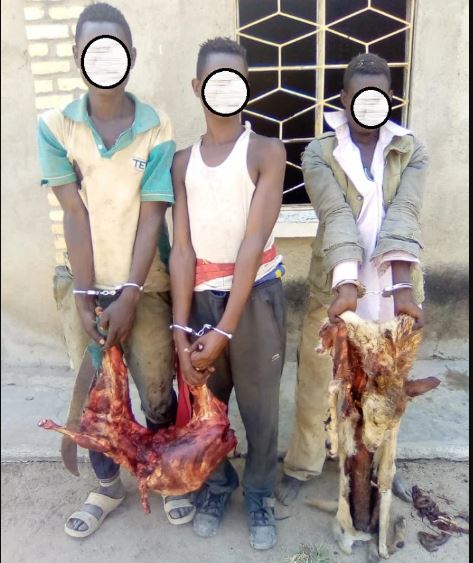 The Rwanda Investigation Bureau(RIB) is holding three men from Ruhango district, Ruhango sector in Southern Province who connived in an unusual project.

The three men, Ihimbazwe Maurice, Yangeneye Emmanuel, and Nshimiyimana Theogene were allegedly caught red-handed while slaughtering a dog and investigation established that they intended to sell the meat to compensate a person the hunter dog bite on Monday.

Kigali Today established that the three men in their twenties bought the dog early July this year and on Monday, August 2, it bit one Paul Dusingizimana, their neighbor who was rashed to Kinazi hospital in Ruhango.

“They slaughtered the dog to sell the meat and raise medication fees for the victim after they knew that they were wanted because the dog was not vaccinated,” said Beata Umfuyisoni, the Executive Secretary(A.g) of Ruhango Sector.

In Rwandan culture, a dog is not edible, and with this, apparently, RIB is more concerned about their safety.

The RIB spokesperson told kigalitoday.com our sister website, that they were held in the first place to assure their security against the neighbors who would be angry about that attempt to feed them with the dog.

“One may be liable if they have slaughtered a contaminated animal that may cause harm to the lives of people,” RIB spokesperson Dominique Bahorera said.

“If for example, you slaughter a cow that has a disease and give the meat to people, that becomes criminal, but there is no article of the law that criminalises slaughtering and eating a dog,” he said.

In Rwanda, a Bishop Uses the Bible to Fight COVID-19

Sponsored: It is Children’s Festival on StarTimes