When the new normal in education starts, students who enrolled at the African Leadership University (ALU) Kigali Campus will not return to their Kimihurura rented space in a commercial building designated to accommodate everything and thus unfit for one thing – a school, learning environment. 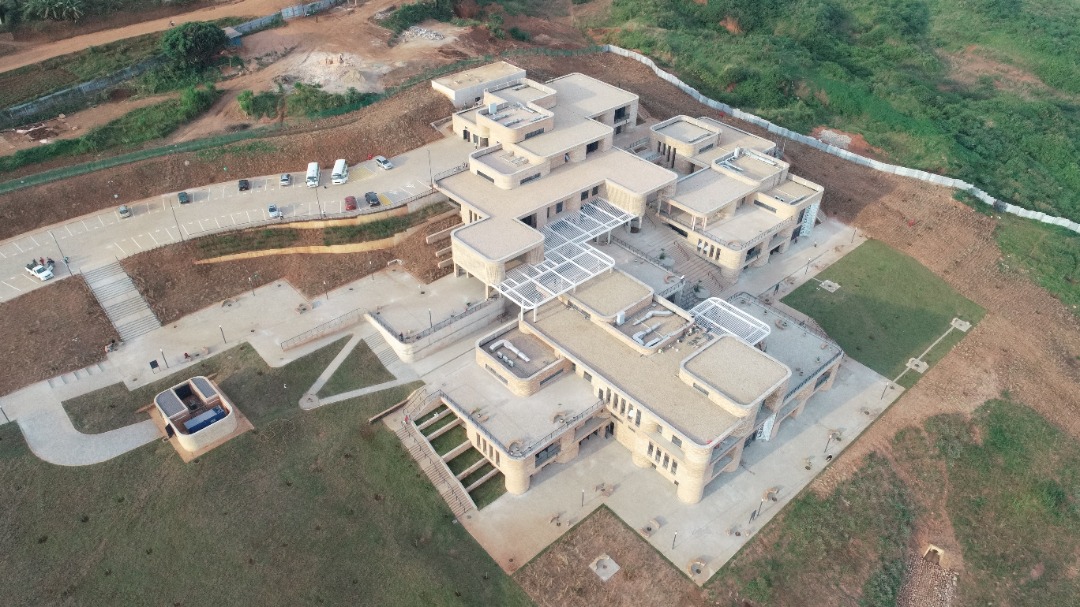 A new campus of this pan African school (ALU) has been completed in Kigali Innovation City, the next hub of Excellence in Rwanda’s tertiary education located in Kigali Special Economic Zone, Gasabo District.

The campus was designed and its construction supervised by Model of Architecture Serving Society— MASS Design Group or MASS. 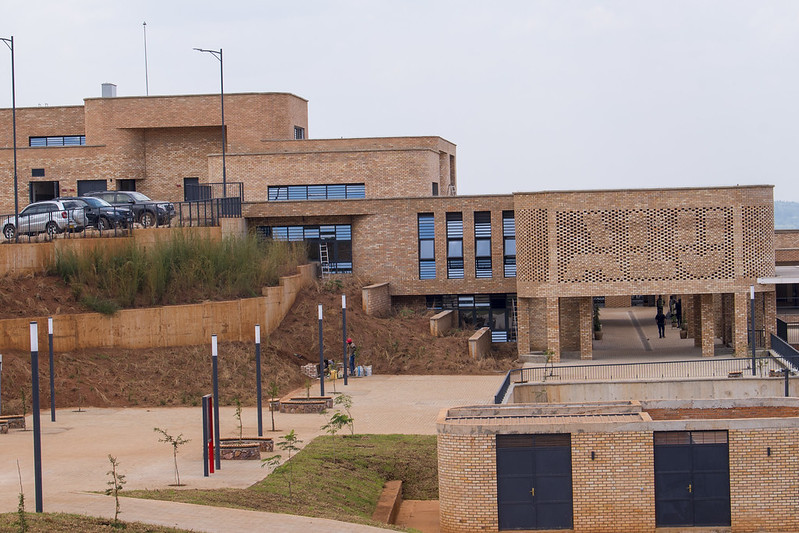 Born in Rwanda in 2009, MASS is first of all a Rwandan company which has grown to export its values across the world with now 5 more offices abroad.

Their belief is, according to Christian Benimana, Senior Principal and Managing Director at MASS, that good architecture is not meant to serve only the rich, rather, it can also serve in a country like Rwanda, which is not very rich but has the ambition to grow. 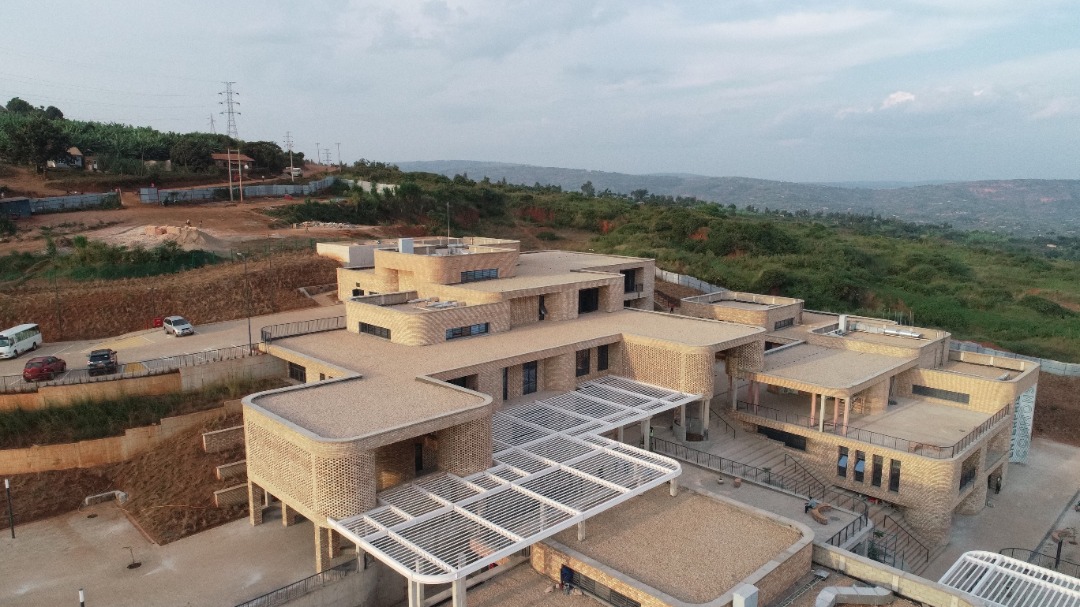 They believe that buildings are not simply foundations and walls and windows and roofs, but need to be “the creation of healthy spaces that support systems governing our society.”

These beliefs and many more are enshrined in the determination of using homegrown solutions through their famous process of “Lo-Fab,” which Benimana says, translates their successful journey in their first decade of existence.

Lo-Fab, he said, “refers to a process of using locally fabricated materials, hiring locally and sourcing as close as possible to the site where you are working from.”

These beliefs were implemented at ALU’s new campus. 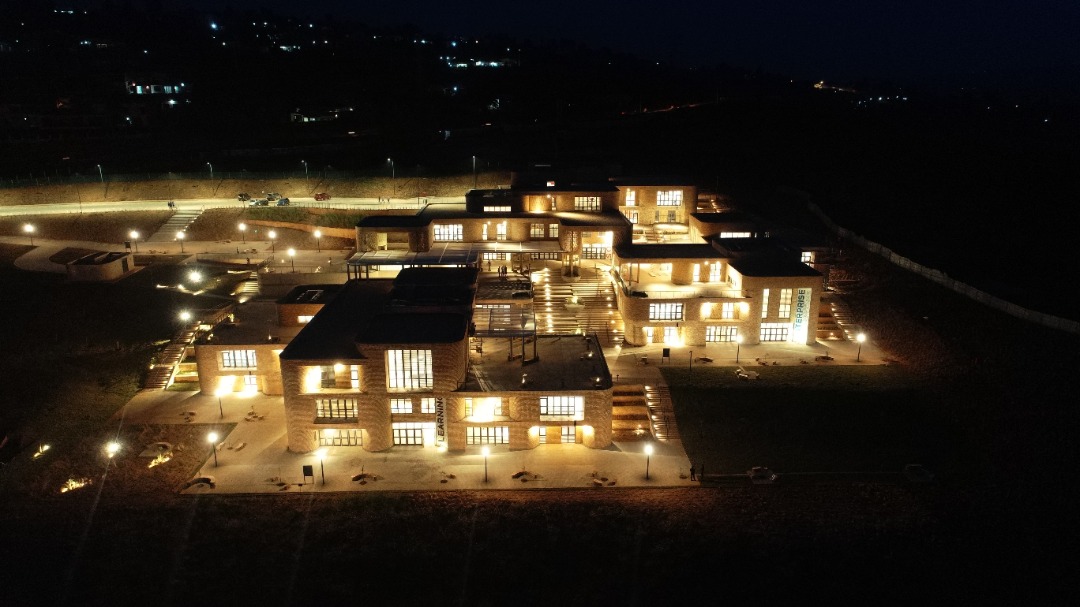 A good morning in early July, our team drove to the campus which is located at the northern extremity of Kigali Innovation City , which offers the structure a panoramic view of the quick growing Kigali special economic zone and the capital Kigali at large.

After checkup, the security at the gate ushered us to Jean Damascene Sekamana, the MASS field staff who was in the final touches of the handover of the building. 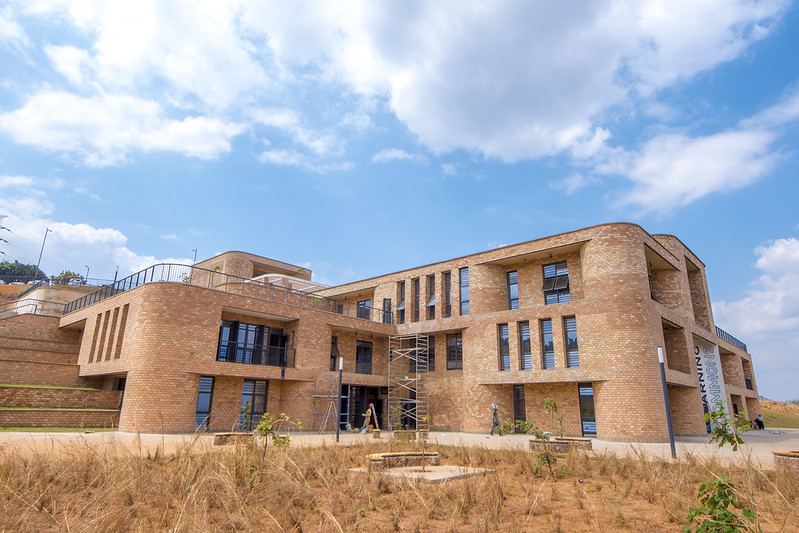 “Welcome,” he said as we walked on a beautiful pavement heading to the huge white fired bricks structure, worth an estimate Rwf 15 billion. The first thing you note upon crossing the gate, is a garden one would not expect at such a big, modern building.

We are used to such gardens of ‘imported’ beauty, whose designers are in some cases inspired by internet tutorials. But here, the ALU garden was inspired by the environment that hosts the building in the first place.

The garden is pan African with iminyinya trees here and umukenke there, and that, explains Sekamana “was done intentionally. We try as much as possible not to destroy the natural environment. This is the vegetation we found here. We have a responsibility to safeguard it.”

Another thing you note before entering the core building is circles here and there, but everything has a meaning.

Standing in front of the building, you actually realize that it stands on circular and really beautifully designed pods. 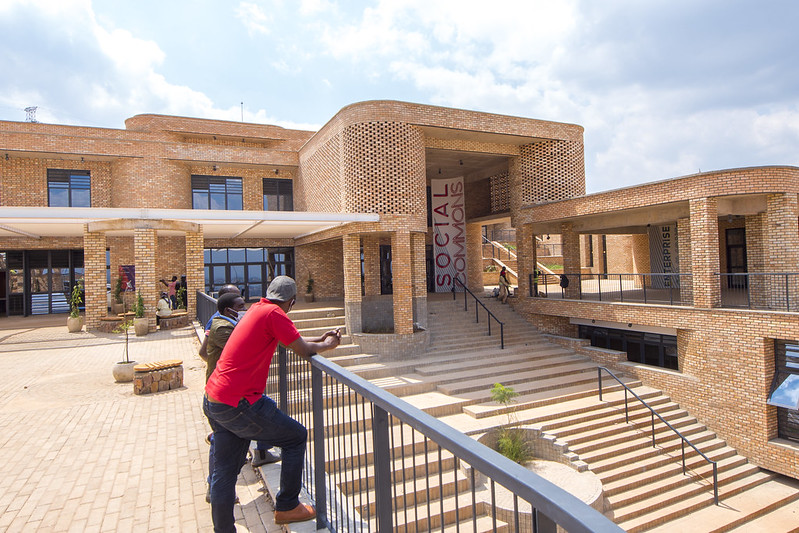 Symphorien Gasana, a MASS architect who helped design the facility, is probably the best person who explains this structure that came to contribute to the dream of Fred Swaniker- ALU founder of blooming 3 million leaders by 2060.

“ALU is pioneering a new learning method of self-learning and discovery of the students, then peer learning in small groups, group learning which is in a bigger group and facilitated learning which involves a lecturer,” Gasana said.

“We took that and extrapolated it into a design scheme.”

“When four pods hold a square they create a classroom,” Gasana said.

“This allows us to have that space you cannot see which helps to monitor different systems in the building.” 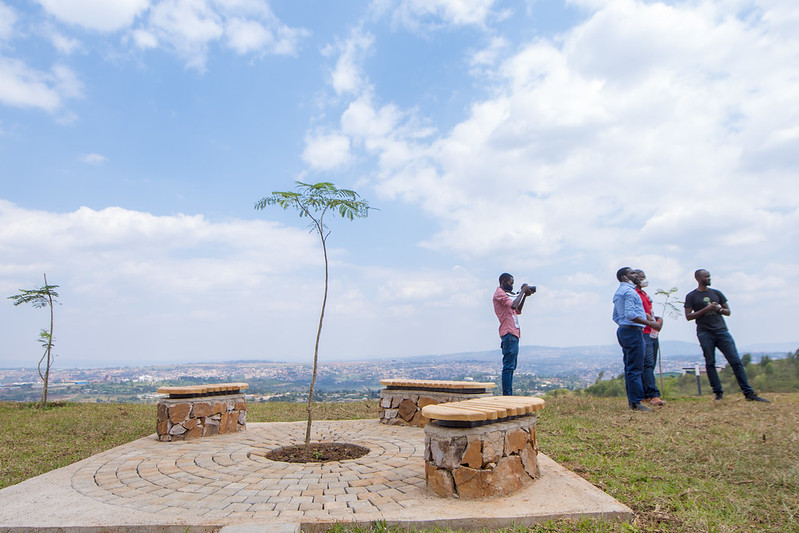 The pods are built strategically in accordance with their intended use.

Meanwhile, this circular shape is also found across the campus, including the garden.

Gasana says that the approach is one of a modular set of squares with circles (pods) at corners. When you multiply or duplicate this module across the site, you have a pattern of squares that have circles.

This circular shape is also translated to the landscape where lights and benches are placed following this concept.

“Even the planting of trees around the site follows that order,” Gasana says of this campus which is a typical example of a “Made in Rwanda” campaign: outside-to-inside. 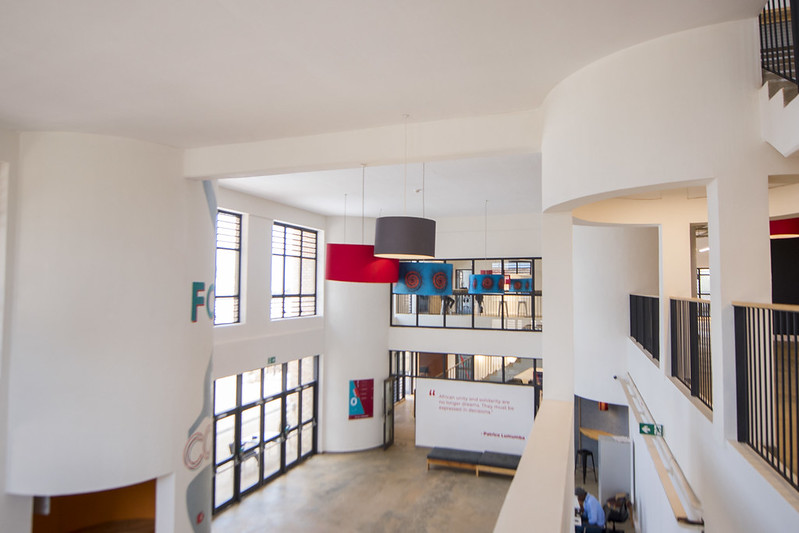 The white bricks for example will tell that there are in Rwanda quality brick makers that need to be discovered, while the 1200 cubic meter water pond, will remind that it is possible to create biodiversity at any construction site.

“The campus is situated on a steep site and buildings terrace down the topography which allowed us to use the roof level of lower buildings for open gathering spaces. The collaboration street that runs through the middle of the campus connecting all three buildings will bring all the students together in one place where everyone can walk, interact with each other, and exchange ideas,” explained Bethel Abate, an Architect who also walked on the design of the campus.

MASS’s approach suggests that any society matters, any construction material matters and for every new building, there is a lot to learn from the local community.

This helps not to import construction materials/workers, but to get them from the site and in the end, the community will be able to appreciate that their environment, their work, has greater values than what they knew.

“That process of locally fabricated does not end up in a low quality product or a low cost. Not necessarily that. But the good thing with it, is that it always creates greater value for the locality. If I bring $ 5 million and I use them to create a value in Kigali, that value will increase and start creating more values. But if I take $5 million and buy something and put it in Kigali, that thing, does not create any further value than its presence,” says Benimana.

A typical example of creating value in the locality can be documented at the first ever project of MASS in Rwanda, the Butaro District Hospital – Burera district with volcanic rocks completed in 2011 and the recently completed phase one of the Rwanda Institute of Conservation Agriculture (RICA).

“We are a firm that is against prefabricated, container solutions, all sorts of things that people seem to embrace because they are prioritizing time and cost, but fail to understand that to build a $5 million project, it takes a lot of resources that need to create values. At the end of that project, you should point to real value that was created and that is going to be sustained over time,” Benimana further said.

Several questions have to come in mind of the architect working on a particular project according to Benimana:

For example if Rwanda has a very strong social cohesion agenda where a country has a very unique history where unity is very important to us because of our past. How can buildings and building industry contribute to that agenda?

How do we understand that construction sites as small communities if you think about it, can also be a platform that reinforce that unity?

If Rwanda has a very strong ambition to create gender equity where we say that women are an equal and integral part of our society and need to be part of every decision making process and development initiatives, it should be translated into the projects.

“The construction industry and buildings that have for many years been male dominated needs to change to reinforce that agenda and give women space to also contribute,” he said.

To give an example on this, Benimana brought a simple case.

Keeping in mind that Rwandan population are nearly 50% male and female respectively, said Benimana, consider for example designing toilets on a building. One would build 4 toilets stalls for men and four for women but, for men, they will go and add four more for urinals.

“And many of us designers don’t translate such a small thing. That’s why, I don’t know if you used to go to night clubs before Covid-19 or restaurants…it’s not unusual to see that the line that goes to the male toilets is flowing seamlessly but the women have to line up.”

For that reason, Benimana understands that the designers have to decide that the number of toilets for male should have four stalls and four urinals and the women toilets should have 8 stalls so that they count for the same number.

“And sometimes, we project our old biases towards the inequality between men and women,” he said.

“You will see that we design a baby diaper changing table only in the women’s toilets, which suggests that men do not change the child diapers. So, by doing that, you build that gender inequality in a physical form and you perpetuate that thinking that there are things only women should do.”

MASS takes into consideration of gender aspects on a building, and every construction site reflects country’s vision on gender. The minimum female workers has to be 30%, like the percentage of women in decision-making bodies.

In Rwanda, the MASS team that is thinking about all of these components is made of 86 staff from 16 nationalities including Kenya, Uganda, Tanzania, Ethiopia, UK, Spain and USA. Rwandans constitute a half of this staff.

They are also the brain behind the Rwanda Institute of Conservation Agriculture- RICA in Bugesera and are looking forward to achieving several other projects like the University of Rwanda Center of Excellence of Biomedical Engineering & E-Health, the Ellen DeGeneres Campus of the Dian Fossey Gorilla Fund, and many more.

Christian Benimana and his team believe that “Copying what the UK or the US or China have done to develop is not the right solution for Africa. We need to find a different model of development.”

He said that one of the mistakes some people make is to think that “because we do projects in Rwanda, in Malawi, and everywhere else in developing countries, there shouldn’t be good architecture projects and that’s false.”

The team is happy to see their dream come true. According to Benimana, from 2011 when they completed the first project, Butaro District Hospital, until 2019, their total combined projects were valued at less than $10 Million.

This year, he said, the projects that will be completed are valued to a total $200 million.

This performance comes with accolades.

“Last year we were ranked 4th most innovative architecture firm in the USA. That brings you to the level of other international and competitive firms that are well respected in the area of architecture and design and that’s very meaningful,” says Benimana. 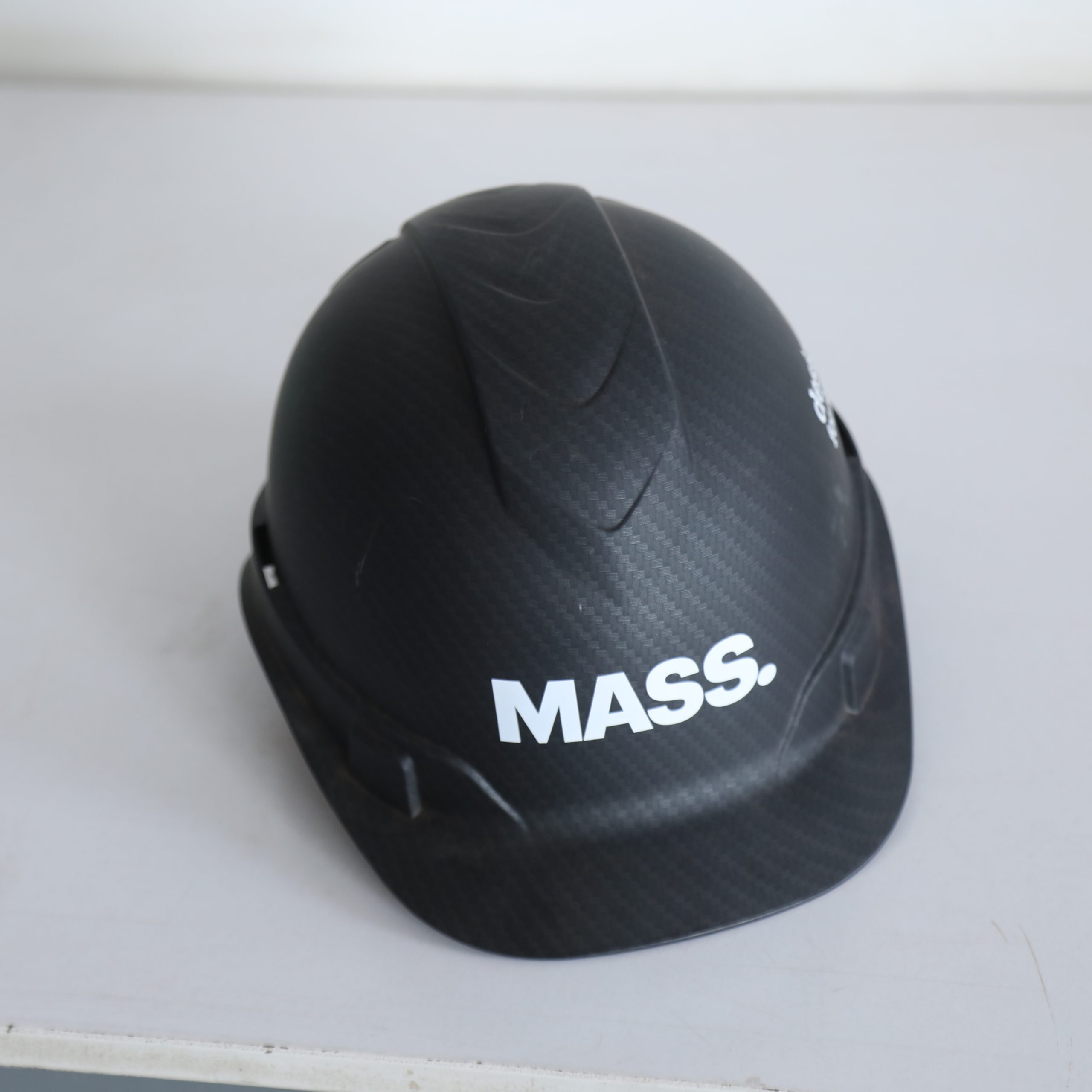