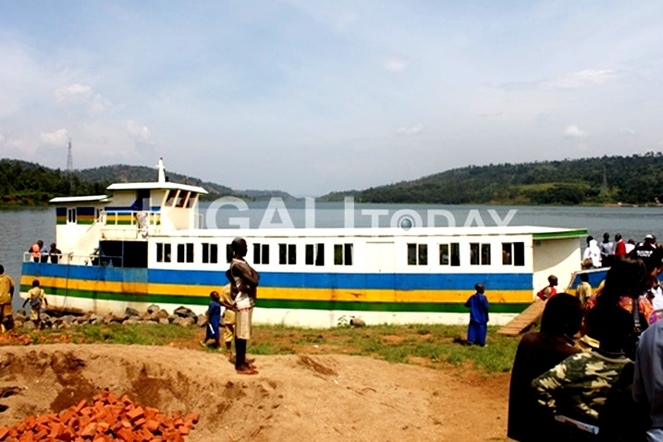 A Ferry President Kagame offered to Nkombo Island residents to help them connect to mainland. The President has promised to provide the resident with another large vessel.

On May 25, 2015, Modeste Ntamukunzi 56, announced to Rusizi District leaders his humble gift to President Paul Kagame.

Ntamukunzi  had learnt about the Kagame’s visit. He planned rewarding Kagame with a piece of land in appreciation for the development he has brought to Nkombo Island.

“I have lived under various regimes in Rwanda but this I have not seen. It’s amazing how relentlessly someone can ensure wellbeing and wealth for people that were formerly inexistent,” explains Ntamukunzi.

He is not sure about the dimensions of the donated plot located in Ngoma Cell, but his sincere wish is for Kagame to construct a residential house there, and make Nkombo home so that residents can interact with him daily.

Ntamukunzi’s life as a fisherman on the Island has only improved during Kagame’s regime. The president has always had his thoughts on the Islanders, sometimes advising them to form and join co-operatives and be able to receive support from government.

He speaks volumes about a deserted Island and a forsaken people who now live their dream life.

In the 1990’s, Nkombo was considered an Island in Democratic Republic of Congo (DRC) and the previous Government referred to Island residents as ‘Bashi’, a Congolese tribe.

Occasionally, some would drown in Lake Kivu while trying to cross over to Rusizi by boats heading to Kamembe town to buy food. Residents would sometimes ridicule and despise them as backward people.

That changed later though.

On June 29 2015, while addressing opinion leaders in Rusizi district, Paul Kagame donated a vessel to enable Nkombo residents have access to the rest of Rusizi district.

“I am giving you an even bigger vessel, please use it to relate, trade and utilize all the opportunities your district has to offer,” advised Kagame, amidst chants of applause.

Part of Nkombo Island’s development engines is a passenger boat that Kagame donated in 2010, with a capacity to carry 100 passengers and 40 tons of luggage.

Revenues from the vessel have facilitated the purchase of three other boats, says Victor Sebagabo, Nkombo Executive Secretary.

After being neglected by the former regime, Nkombo residents resorted to seeking their supposed roots from elsewhere; they invented a language known as ‘Amahavu’ a mixture of two dialects; Congo’s Lingala and Kinyarwanda.

To earn a living, the settlers on the Island chose to focus on fishing for men and picking up trash, carrying luggage and sweeping streets.

“I saw my mother and the rest of the women act as a porter, carrying heavy sacks of cassava flour, to earn a living, while the men were home awaiting relaxing and awaiting food,” says Eithe Ilitamuliza 32, a resident.

Fishing is only done at night. So men spent all day home.

Meanwhile, the Island had one primary school, with primary three as the highest level. A few families, who could afford, sent their children to DRC for school.

“Then, the most learned resident was a policeman at the commune,” recalls Ntamukunzi.

As of now it’s been a long-home coming for Nkombo with development flowing in different aspects for the 180,000 residents.

The Island boasts of 8 PHD graduates, uncountable degree holders, but that alone seems not enough. Nkombo has the highest hydro-energy coverage in Rusizi with 42% households having access to electricity, yet the neighbouring sector is at 25% coverage.

Several names have come from rags to riches. Local artist Mani Martain, also from the island has become a big celebrity.

A modern guest house with 30 rooms is another development. “The president can be assured of accommodation when he comes to receive his land,” says Ntamukunzi.

One thing for sure, the Nkombo Islanders praise Kagame for the development in the place. The love for Kagame is unquantified. Nonetheless, once a place perceived backward, is one of the admired places to live.