The World Economic Forum (WEF) has unveiled the Global Governance Index indicating that Rwanda is governed better than nearly all advanced countries, or the ‘Western Democracies’.

The index has triggered a global debate on Rwanda and made everybody ask: what were the benchmarks used; who should take credit?

Rwanda is only compared against Qatar, Finland, Singapore and the United Arab Emirates.

Among several aspects, the WEF researchers looked at how wasteful government spends its meager resources available (frugality) and level the of red tape standing in the way of investments.

What made the index so much of an issue is it came out a day before the much-awaited parliamentary debate on amending the constitution to open doors for a possible third term for President Paul Kagame come 2017.

The index also came a week after the 21st anniversary of the Liberation of Rwanda and the end of the genocide.

Actually, when one lawmaker mentioned the index during the debate at the packed parliament, affirming that without Kagame nothing of the kind would have happened, there was a deafening applause.

But that was it.

Few, if not all, know who Kagame is, what makes him act the way he does, lead the way he leads, what inspires him, and connect the dots to be able to make sense of how long and what it has cost him to get to the point where they argue fiercely and so passionately about him being President until only God knows.

Let’s jump a stage and begin from January 1979, when a 21-year old Kagame joined the Ugandan army. Kagame understood Uganda’s social political setting so well, but lacked more about Rwanda. He visited Rwanda on several occasions because of the attachment he had maintained with his mother land.

Besides, many of his family members remained here. It would not be indifferent to say, he was more attached to Rwanda, than anywhere else.

Towards the end of 1979, after Uganda leader Idi Amin fled, the new Ugandan government under Milton Obote was convinced that the country needed a stable and strong army representative of national differences. Plans got underway for a professional army.

Kagame was 22 years then. He sat for a grueling exam meant to select candidates to attend Tanzania’s elite military academy, Monduli, where some of Africa’s finest soldiers have trained.

He passed the test.

Preparations began for the new recruits to travel to Monduli, but the day never came.

Kagame did not make it to Arusha, where the academy is based. The new Ugandan army had changed its name to Uganda National Liberation Army (UNLA). The country’s leadership, political and military, had been all from the north. They wanted to keep it that way.

Kagame was struck off the Monduli list amid a secret purge of people considered non-Ugandans.

He was branded a “Rwandese”. The ordeal did not end at that: Kagame and other seemingly suspicious names were removed from the national army completely.

Obote was determined to keep “Uganda for only Ugandans”, as was constantly said on confidential government correspondence. Obote detested Rwandans, so severely.

That was too big a deterrent to Kagame who by then, had plans to gain valuable experience for an eventual return to Rwanda.

At 22, Kagame, like many other Rwandans, was painfully nursing a wounded soul that yearned for his home, Rwanda.

Meanwhile, with all his divisive policies, Obote moved to legitimise his rule with an election. In December 1980, Ugandans went to the polls, and the Uganda People’s Congress (UPC) was victorious.

President Obote had cemented his rule.

Those deemed unwanted would choose to stay and be haunted by the humiliation, or choose a more dangerous path.

On February 6, 1981, a group of 27 young men headed for the bush to fight Obote. Kagame was among a select few who led the project and mobilized others.

Obote was infuriated. In October 1982, he expelled thousands of Rwandan refugees. He bombed some refugee camps with planes.

Obote preferred not anything else, but a friend in Habyarimana, than give sanctuary to needy refugees forced out of their country because they were not Rwandan enough. 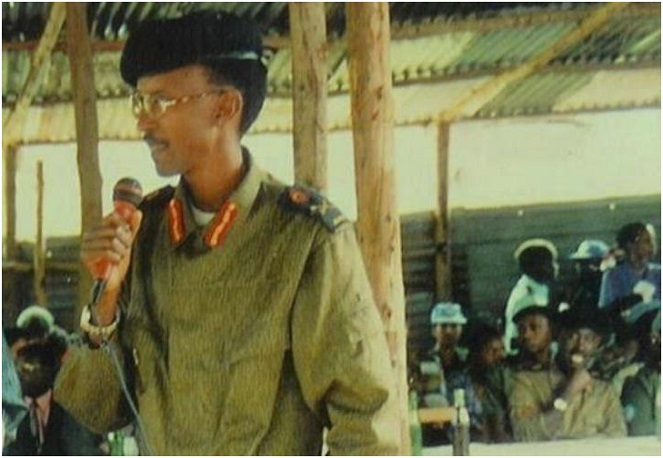 Years later, in 1987, a few educated Rwandans joined efforts from small groups they had formed to plan a return, the Rwanda Patriotic Front or FPR Inkotanyi was born.

As often said, the rest is history

So, Kagame is back home and on April 22, 2000, he becomes President. Award-winning author, Stephen Kinzer, writes in his 2010 best-seller Kagame biography that Kagame established an extensive series of goals and priorities and established a new formal program “Vision 2020”.

By 2002 and 2003, Rwanda had been brought from chaos and devastation to peace and stability, notes Kinzer.

Scholars on Rwanda often refer to this as the “Prussia of Africa”, where Kagame has insisted on strict self-discipline from every citizen.

Everything must work well, and on time. Streets must be clean and regulations followed.

Shops must display tax certificates, price tags on merchandise and there is extraordinarily little graft or corruption. Justice is swift, and against anybody no matter their status.

Orphanages closed and children adopted and taken to school. Beggars on the streets given jobs or small businesses to run.

Using a public post for personal gain is one of the worst offenses. Powerful army generals have been brought to order.

His government is at all times rigorous and absolutist, covering more than 75% of medical bills for all citizens.

His hostility towards poverty has rescued over one million Rwandans from the purges. The economy has grown ten folds, from US$ 1.7 billion in 2000 when he became president to US$8 billion.

He is the greatest salesman Rwanda has ever had, attracting over US$2 billion investment in the last five years. And he seems to have no intentions of retiring on that task yet.

Twelve months ago, he sold a Euro Bond and earned US$400 million. The list goes on and on.

And yes, a stranger walks unharmed on the streets with a sack full of a million dollars.

Authors Patricia Crisafulli and Andrea Redmond make another case for Rwanda and its “CEO” President Kagame.

Due to Kagame’s extreme frugality, it could be “the ultimate turnaround story on a continent better known for broken promises and unfulfilled potential,” they write in their book “Rwanda Inc.”

Twenty-one years after the bloody battles that brought order to the nation, and 36 years of Kagame soul searching, going by the latest World Economic Forum Index, have now the deprived Rwandans finally reached there?

“Rwanda’s strong showing in seventh position was secured thanks in large part to the low level of waste in government spending,” said the Davos group’s data.

But for Rwanda, the WEF report is simply a vindication of its own assessment.

Former US Assistant Secretary of State, Dr Jendayi E. Frazer, was one of the three independent external reviewers.

The scorecard showed governance was improving by the year. Out of the eight indicators measured, six scored above 75%, compared to four in the previous scorecard.

Kagame introduced the scorecard to measure success on his policies. For officials, failure attracts uncomfortable feedback.

His model, the ‘do for yourself, remain independent-minded and self-determining, and forge strategic partnerships with those who support your vision’ is obviously working.

But don’t be overtaken and be quick to judge those who can’t describe what motivates Kagame, because not even his closest aides know anything as small as a grain of sand.

Those who are fiercely demanding for constitutional amendment and provide for a possibility for Kagame to continue leading Rwanda can only explain what he has done for them, but none can explain what drives Kagame’s efficiency.